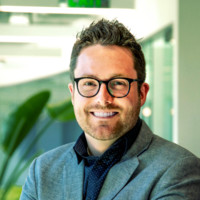 Jason N. Wilson is an ambitious marketer with a proven record in the digital marketing industry.
‍

At Overstock, Jason is currently leading teams focused on social media and programmatic display advertising efforts. He has also been heavily involved in the development of incremental testing methodology to help show the value that is driven by social advertising. Jason’s prior roles include Marketing Manager at Amazon, where he managed multi-million-dollar efforts to promote award-winning Amazon Original series, such as: “Transparent,” “Mozart in the Jungle,” and the
critically-acclaimed series, “The Man in the High Castle.”

Additionally, Jason gained deep advertising experience working for several Agencies within the Publicis Groupe, where he drove the programmatic digital media buying for some of their most prominent West Coast clients, including: Microsoft, T-Mobile, Qantas Airlines, Denny’s, Best Buy, and others.
‍

Jason currently lives in Utah with his wife and four children.