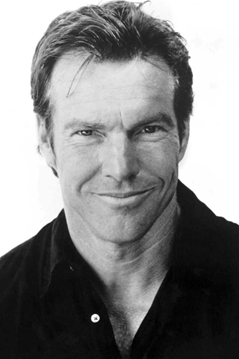 Dennis Quaid is an icon of American culture and multi-hyphenate actor, musician, Esurance spokesman, and now successful podcaster. His nearly four decade long resume of movie roles includes modern classics like; Breaking Away (1979),The Right Stuff (1983), The Big Easy (1986),Innerspace (1987), Great Balls of Fire!(1989), The Parent Trap (1998), Frequency(2000), The Rookie (2002), The Day After Tomorrow (2004), and Soul Surfer (2011). In 2019 he teamed up with Jared Gutstadt to create the groundbreaking, “Bear and a Banjo,” The scripted, musical podcast was named to Variety’s best of 2019 List and paved the way for AudioUp, which the duo hopes will bring “audio blockbusters to the podcast realm.” Quaid’s latest podcast,  the Dennaissance recently cracked the front page of Apple with Variety calling it, “a runaway smash. ” Recent guests include Billy Ray Cyrus, John Carter Cash, Billy Bush, Albert Pujols, Adam Carolla and more. When he’s not working, Dennis can be found at home with his family and beloved bulldog Peaches. He’s an avid cycler, golfer, licensed pilot and all around renaissance man.