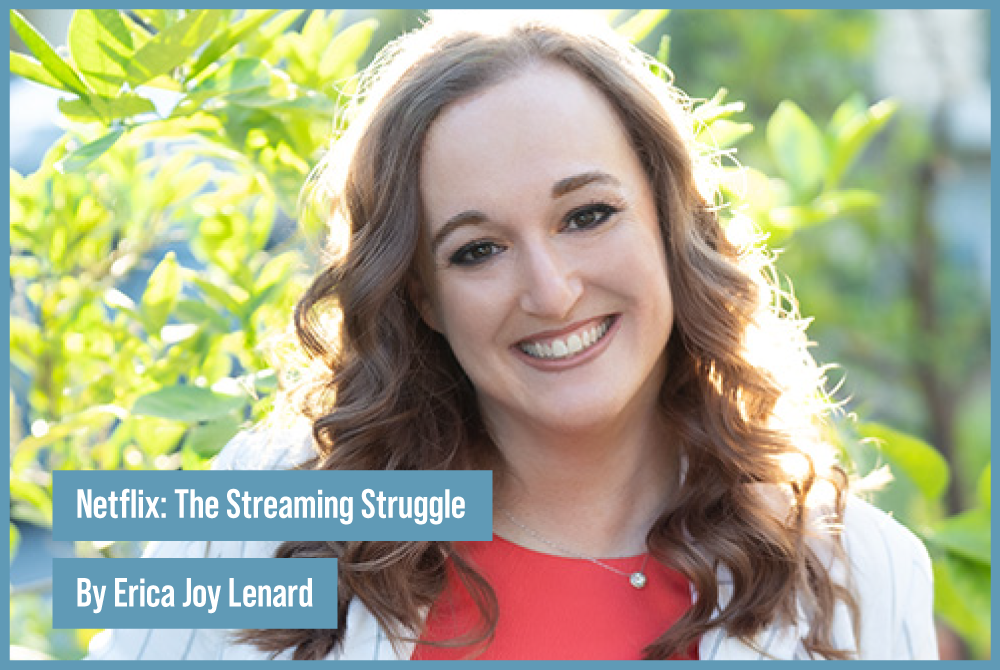 It isn’t difficult to remember a time when Netflix transformed the media space beyond recognition. Being the first company to truly pioneer the age of streaming, Netflix originals defined the television landscape for years. Shows like House of Cards, Orange Is the New Black, Squid Game, and perhaps their greatest achievement Stranger Things, served to define their brand with quality series you couldn’t get on “TV.”

Between that and algorithmically generated recommendations for their subscribers, they were the go-to streaming service for the longest time. But now Netflix is starting to show signs of decline. Amidst revelations that Netflix had lost 200,000 subscribers within the first quarter of 2022 – sparking a 35% stock plunge in one day – many are asking what went wrong, and why the former champion of streaming services is losing its audience.

There’s no doubt that a key factor is their lack of IP with revenue diversification potential – or “Omni Entertainment Franchises” – franchises that can thrive and develop beyond the screen and into the multimedia sector. When you look at similar streaming competitors, they have properties like Harry Potter, Star Wars, the Marvel Cinematic Universe, SpongeBob SquarePants, Pokémon, and the DC Extended Universe. All can generate revenue beyond subscribers, helping offset any potential instability in the performance of the services.

In fact, the biggest takeaway from Netflix’s sudden drop is in a statistic from Variety. When asked “How Important are Marvel TV series for you on Disney+?” 55% of respondents said that it was a major reason in their subscribing. 8.5% said that it was the only reason they subscribe, with just 10.3% saying they didn’t care. This best proves the power of IP – and having properties that you can continuously develop across platforms, creating an “Omni” level experience.

This is most true for content targeted at younger demographics – content that can most effectively be adapted into toys, comics, games, and merchandise. For example, a franchise like Harry Potter can adapt to merch, games, theme park attractions and even a successful on-stage sequel. The same can be said for any other Omni Entertainment Franchise – even with actors coming and going, the universe remains a rich place to explore, develop, engage fans, and generate significant incremental revenue.

But according to KidsKnowBest’s Netfiles Report, Netflix’s content is rarely engaged beyond the platform with the 12 – 16 demographic.  And when you look at kids under 12, there are no Netflix-owned IPs anywhere in sight to even begin to branch out!

And it’s not just a kids' game - Variety reported, “Many of the most watched shows on Netflix for the U.S. in 2020 and 2021 were licensed series, according to Nielsen, with their total viewing time surpassing even massive hits “Squid Game” and “Ozark.”

Compared to Disney’s The Mandalorian, a show targeted at a similar demographic, nearly double the UK respondents bought a toy and played an app. Naturally, Lucasfilm already has a successful history of capitalizing on the Star Wars brand, but this is further symbolic of Netflix’s approach to “Omni-media” franchises.

In fact, it seems Netflix’s bread-and-butter is typically averse to the four-quadrant formula on which Omni-franchises are built. According to CNET, their biggest IP skew towards an almost exclusively adult market – either with foreign language thrillers, period romances, or crime dramas. The content they have for the younger demographics is either edgy, controversial, or lacking expansion potential, such as You, 13 Reasons Why, or To All the Boys I’ve Loved Before. Despite these shows receiving critical acclaim, any multimedia development feels limited.  And their recent kids’/animated series cancellations and staff layoffs demonstrate their lack of vision with these properties ripe with Omni potential.

In 2021, Netflix launched a branded merchandising site – Netflix.shop, offering clothes and boutique items from some of their largest IP. Current CEO Reed Hastings was quoted as saying “We’re learning how to do merchandising,” with Sarandos flippantly adding “Now you too can own one of these ugly sweaters.” Sarandos’ seeming reluctance to get involved in this space is precisely why Netflix series felt so fresh – namely, their prioritizing compelling stories to IP cash-ins. But now, their marketing strategy exists only as promotion, and not to extend the life of the IP to generate evergreen revenue.

This all feels different from their competitors – most notably Disney IP, where toys, theme park attractions, music, and more feel woven into the makeup of their content, well beyond the original premier. For example, with the success of The Mandalorian, Mattel’s 11-inch Grogu was the hottest selling item during the 2020 Holiday season and Mando became a new theme park walkaround character – a direct result of the series’ popularity.

In a recent Vanity Fair interview, Lucasfilm President, Kathleen Kennedy discussed their model with regards to one of their biggest draws, stating “I hesitate to use the word trilogies anymore because Star Wars is much more about persistent storytelling.” This storytelling exists in the form of multiple series augmenting the world and driving engagement beyond the content across multiple touchpoints.

But Netflix’s approach to content feels reminiscent of franchises past – having a hit at the box office, and then releasing unplanned sequels, and then done. Instead of enriching storyworlds across markets and platforms, their solution is instead to release follow-ups to viral hits. No clearer is this the case than with Squid Game, a 2021 lightning-in-a-bottle concept that resonated with audiences.

But instead of immediately following up, it’s estimated that season 2 will be returning in 2023 or 2024 – time that could otherwise be used to cultivate a fanbase and grow the IP through other mediums. Yes, they also just announced a reality-competition series inspired by the show but the release date is TBD and again, is only content.  With stagnated releases and a lack of other revenue streams, it feels like Netflix’s mismanagement of IP will cost them long-term – especially in a new, competitive landscape.

Despite this, one of Netflix’s strengths has always been to find and promote quality programming – even now, Netflix still has incredibly popular shows with both critics and audiences. As Sarandos said, it’s “to keep pushing the boundaries of what a consumer-first company can achieve for people who love stories.”

Netflix can still thrive in a space where audiences clammer for expansive stories and immersive experiences. But to regain their crown they must invest and develop their properties beyond their series premieres and off platform. It was through the streaming model that they took down the decades-successful Blockbuster. But now Netflix must re-evaluate its content strategy lest they suffer a similar fate.

Co-author James K Wight graduated with a distinction in his MA in International Film Business between the University of Exeter and London Film School. He has since worked for the Future of Film Summit and has given talks at Cambridge University on transmedia storytelling and franchise-building.

About KidsKnowBest: KidsKnowBest are the fastest-growing specialist communications agency in the business. It bridges the gap between brands and kids, youth & families by offering end-to-end services including research and development, the latest in creative thinking, strategy, production and performance. The agency puts kids’ voices at the forefront of all its work, helping companies to understand, connect with and engage their audiences in a way that will amplify their brands. Clients include Universal, Disney, LEGO, Rovio, Itsu, Smyths Toys, Mattel, eOne, Viacom, Puffin Books and Hasbro.