As a marketer and content producer, Ryan Eckel has worked on practically every side of the sports marketing spectrum.From nearly a decade with Puma (including over two years as Head of Marketing for the apparel company’s Eastern Europe, Middle East, Africa and India business) to seven years in VP roles at Dick’s Sporting Goods to his work as an Executive Producer on 2014’s Emmy-winning football documentary “We Could Be King,” 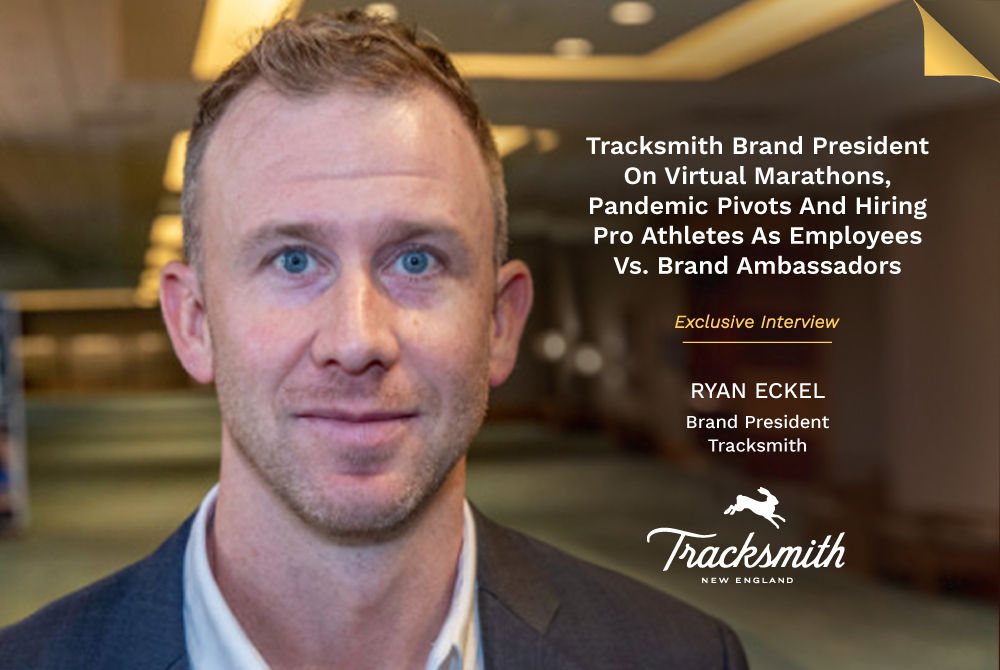 As a marketer and content producer, Ryan Eckel has worked on practically every side of the sports marketing spectrum.

From nearly a decade with Puma (including over two years as Head of Marketing for the apparel company’s Eastern Europe, Middle East, Africa and India business) to seven years in VP roles at Dick’s Sporting Goods to his work as an Executive Producer on 2014’s Emmy-winning football documentary “We Could Be King,” Eckel was well-equipped before entering his current role as Brand President at running wear company Tracksmith last September.

Still, nothing can quite prepare you to take the reins of a fast-growing brand during a global pandemic. “What stands out to me is the truly global nature of it - every single person on the planet is impacted to a certain degree - and the uncertainty surrounding both the present and future,” Eckel says. “As a marketer, navigating that requires extraordinary empathy and agility; two qualities that serve marketers well during normal times, but are essential at this particular moment.

While amateur running — the base of Tracksmith’s consumer business — is on the rise during quarantine as one of the few social distance-friendly athletic activities, competitive running events are among the many sports indefinitely impacted by large gathering guidelines.

“The rhythms of running are largely driven by in-person events; marathons, local road races, and frequent gatherings of training groups,” Eckel says. “It's a highly social sport that thrives off its community, and our community has been a big part of how we have grown the brand.”

So when major races started getting cancelled where Tracksmith had planned activations, beginning with a pop-up retail store activation at the Tokyo Marathon in early March, Eckel and his team knew they had to quickly change course. “We closed down our Boston store and put our regular store-based community events on hold. Instead, we focused on providing as much motivation and inspiration as we could for our community while they socially distanced at home.”

A collegiate-inspired brand headquartered in Boston with New England-themed branding founded in 2014, Tracksmith specializes in athletic and athleisure wear for running enthusiasts of all stripes. It’s been dubbed the “anti-Nike” by some media outlets for shunning the celebrity endorsement model and logo-heavy placement of bigger brands (its signature brand insignia, “the hare,” has more of a Lacoste alligator placement on lapels). In recent months, Tracksmith has taken a different approach to partnering with pro athletes by hiring them as full-time staff to steward the brand’s mission to running enthusiasts.

Six months into the world’s new normal of mostly sheltering in place and keeping outdoor exercise to a safe, masked distance, Eckel caught up with Brand Innovators about the strategies and partnerships that have helped Tracksmith navigate its new consumer path (hint: lots of Zooms and premium podcasts), and how they’re bracing for an unpredictable future – including the first winter of coronavirus conditions.

Brand Innovators: Tracksmith was founded with what has been described as an “anti-Nike” ethos by not over-relying on superstar athletes. How has that approach paid off so far, and where do influencers and ambassadors fit into your current strategy?

Ryan Eckel: Tracksmith was founded with the goal of honoring the Amateur Spirit of running, and not as the antithesis of any particular company.  The word "amateur" actually originates from the Latin word "amo/amare", which means "to love", and in that sense we're all amateurs who run simply because we love it. In this context, the idea of the amateur has very little to do with talent or speed. For example, we recently hired two world class athletes - Nick Willis, a two-time Olympic medalist in the 1500m, and Mary Cain, a World Junior Champion in the 3000m - into full time jobs.  They are both amateurs in the sense that they work a demanding job while trying to also run at their highest possible level.  We're fortunate that there are so many runners out there who can identify with and relate to this Amateur Spirit, and they in turn, become ambassadors for the brand.

What are some new innovations you've introduced as a result of the indefinite quarantine activity, both from a product perspective as well as content to better serve your customers?

We have been focused on finding meaningful ways to engage with our audience. With races and events cancelled, many runners are struggling with motivation trying to figure out how to make the most of this time. So, we curated lists of the best running-related books, films, and podcasts for runners who suddenly found themselves with a lot of extra time in their homes. We organized Zoom talks with fascinating people from across the sport, open to our community. We highlighted stories of runners around the world who were all going through the same upheaval. We started a Slack group for our community to share workouts, ask questions or just have a chance to hear from other amateurs.

On the product side, we just launched a new Run Commute collection. Running is one of the safest, healthiest, and most sustainable methods of urban transit, yet it doesn't occur to many people — including most runners — to consider running from point A to point B then they commute or move about the city. But that may change in a post-COVID world, when people will be less eager to hop on the subway or jump in a rideshare. Our Run Commute collection was designed specifically for getting to and from the office or any other place, using a water-resistant stretch Merino wool that can be worn multiple times without washing — which is perfect for running to work in the morning and then wearing it for a jog home several hours later. But, more importantly, we’re trying to spark a cultural change around the idea of running as a better way of moving about.

How would you characterize Tracksmith's sales activity to date in 2020? Is overall business up as more people are working out from home and social distance running?

We've been encouraged by how our business has performed in 2020 despite everything that is happening in the world. We entered March with some good momentum. In fact, one of our biggest ever brand moments was at the US Olympic Marathon Trials, held on February 28th, right before the world was turned on its head, where we supported approximately 20% of the athletes in the field. That momentum, along with some of the current shopping and participation trends, as well as the agility of our team to find ways to connect to our community, has helped our business to be resilient through the pandemic so far.

As athleisure has become the de facto dress of the current era, are you seeing any performance growth on your end that speaks to that trend?

The biggest trend that we're seeing is a significant increase in the numbers of people who run. The one silver lining throughout the pandemic is both how running has generally remained one of the few activities that can be done safely, and how incredibly important it has become to so many people. It’s been a way to stay healthy, get some fresh air, travel beyond your neighborhood and find some tranquility in a chaotic world. That has drawn new people into the sport and helped to create a new running boom, which is incredible to see.

How have you adjusted your media mix over the past six months - which channels are performing better for you now than they were pre-pandemic, and why?

We've gradually expanded our mix from mostly digital performance to now also include higher impact brand awareness channels. Specifically, people seem to be paying a lot of attention to trusted news sources and using podcasts to pass the time, so we've been focused on those types of partnerships. For example, we recently launched a content partnership with the New York Times that featured Malcolm Gladwell, Knox Robinson and Mary Cain. Speaking of Malcolm, we also partnered with his “Revisionist History” podcast, and have also worked with other prestige publishers like “Outside” and “Monocle.”

How are you planning for the next 6-12 months, especially as winter looks uncertain for a recovery period?

We're taking things day-by-day and not committing to anything too far out. Our main focus will continue to be on supporting our community through the winter months. Since we're a New England based company, we're well accustomed to the grit and resolve - not to mention the gear - needed to train through a harsh winter. But this winter could very well be mentally tougher than most, so we'll focus our energy on inspiring and motivating our community to use running to help get through it.