Ian McLernon, President/CEO Americas of Rémy Cointreau talks Love Letter campaign, supporting restaurants and bars during the pandemic, and why a Super Bowl ad is the ultimate media buy. 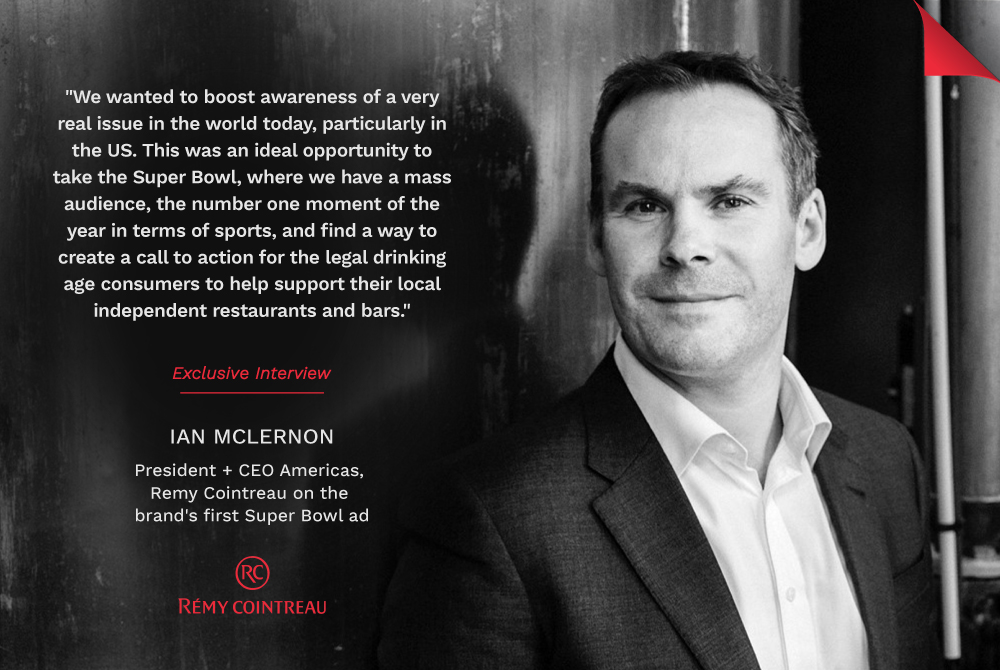 For Rémy Cointreau, a family-owned French business established in 1724, the pandemic has had both upsides and downsides.

The company’s retail business is growing at a record pace, but it comes after the Cointreau brand has become popular in the U.S. due to on-premise partnerships in the last few years. Even as the brand’s business is doing well, the pandemic has hit the company’s partner bars and restaurants hard.

That’s why next week’s Super Bowl will mark a first-time ad buy for Cointreau, the company’s premiere orange liqueur. In conjunction with the Independent Restaurant Coalition (IRC), the :30 second spot will air regionally around the nation during the big game. The documentary-style ad is a “love letter” to restaurant workers and bartenders impacted by COVID-19, the people who make events like the Super Bowl memorable. The media buy is part of Cointreau’s broader regional strategy and ongoing efforts to support recovery for local bars and restaurants.

“Globally, when you think about a key American moment, you think about the Super Bowl,” said Ian McLernon, President/CEO Americas of Rémy Cointreau. “When you live in the U.S., it’s even more magnified. Our brand is performing well, but we also believe in giving back. Throughout a number of years, we have been involved in CSR [corporate social responsibility], it’s always been a part of our DNA. As a family business, we take a generational approach. We don’t just focus on short-term gain, we focus on the long-term gain for our partners, stakeholders, and the general society.”

Cointreau is using the Super Bowl ad to raise awareness around the 500,000 independent establishments that have closed and their 11 million employees that have lost work. Andrew Zimmern, founder of the IRC and four-time James Beard award-winning TV personality, created the spot, which will run in 15 U.S. markets known for their culinary traditions including: New York, Los Angeles, Chicago, Miami, San Francisco and Boston.

Cointreau has grown in double digits over the past few years in the U.S. market, per Remy Countreau, on the back of a buoyant on-premise cocktail business. During the pandemic, the brand's business has continued to grow as consumers looked for new cocktail recipes for Zoom cocktail parties.

“We have seen consumers experiment with premium spirits from the comfort of their homes,” said McLernon. “The brand is performing well. We believe that we have significant opportunities to continue to grow, but it’s about building awareness and also understanding of Cointreau as a triple-sec and the role it plays in cocktails. There is a real opportunity with margaritas, the number one cocktail in the US, to educate consumers that the original margarita contains Cointreau.”

Brand Innovators caught up with McLernon from his home in New York to discuss the Love Letter campaign, supporting restaurants and bars, and why a Super Bowl ad is the ultimate media buy.

Brand Innovators: Why did you decide to run it during the Super Bowl?

Ian McLernon: The biggest market for Cointreau in the world is the U.S. With the margarita, the national cocktail of the U.S., we are a part of that drink. What it links into, with the Super Bowl sponsors, the brand has been performing well. Our brand is very much rooted in the on-premise, as in drinking our products on the premise, at restaurants, bars, hotels, etc.

During the pandemic, the past eleven months, a lot of our business partners have had tough times in terms of customers and trade partners we work with. For those of us living on the East Coast, there was outdoor dining and many operations could trade during the summer months because of warm weather. As we transition into the winter months, things are becoming exceptionally tough. A number of markets for on-premise have closed.

We started the IRC (Independent Restaurant Coalition) partnership at the beginning of the pandemic, they represent independent restaurants and bars. The impetus on this was that, at the start of the winter season, in December alone, 375,000 people lost their jobs in this sector. It is a large employer, a large contributor to the economy and to communities. We as a brand at Cointreau felt as though we should do what we can.

The customers on-premise have been giving us so much over the past 175 years and we wanted to give back. We wanted to boost awareness of a very real issue in the world today, particularly in the US. This was an ideal opportunity to take the Super Bowl, where we have a mass audience, the number one moment of the year in terms of sports, and find a way to create a call to action for the legal drinking age consumers to help support their local independent restaurants and bars.

What is the strategy behind the Love Letter campaign?

We are playing it across traditional broadcast media and on Youtube and social media. PR is an important part of the amplification of our company. But I want to stress that this is not just a campaign, this is something through which we want to give back to our partners. We have three values within Remy Cointreau as an organization: people, place, and time. ‘People’ is the most important value.

For all of our brands, it’s the people that make these brands the success that they are; whether it’s the end consumers, the trade partners we work with, or the people in our organization. We want to create a call to action that touches the heart of our consumers and gets people to think about the memories and great experiences they’ve had in local bars and restaurants over the years, and also to have a sense of optimism for the future. Restaurants and bars will make a comeback, we want to reimagine the experience of on-premise dining the future.

How does this talk about continued industry relief efforts rather than initiatives surrounding social justice, sustainability, etc.?

It’s a serious topic. We believe that we can help amplify this topic in a way that is meaningful in terms of touching people’s emotions and memories, while also giving optimism, but more importantly emphasizing that the hospitality industry is about the people. And we need to help the people who work in this sector today and continue to support them as on-premise rebounds as we go into the spring. We want to get back to the new normal, no matter what it is. Experiences will be different, consumers will want to get together with other people. People like people. We believe that Cointreau is an essential ingredient of that experience, through cocktails like margaritas and cosmopolitans, among others. Cointreau has an important role to play. This changes our objectives. As a brand, we want to do good. We are a family-owned business and we do take a generational approach to everything we do. We want this initiative to be built over a number of months and years.

We have a great partnership with the IRC, they share our values. We are both people-centric and take a longer-term approach to things. Coming together, we are able to help touch the hearts of consumers and make a difference to these people who are having a tough time. The concept of the “Love Letter” is to get consumers to go to our website and write love letters to the people that they miss and the people that are struggling. But more importantly, to remind people to support their local restaurants and bars where they can. In some states, on-premise dining is open, in other states, it is not.

In some states you can order cocktails to go, we want to encourage people to do that. We want them to order from these retailers and get it delivered to their home. We want this topic to be at the front of people’s minds. The Super Bowl is an ideal time to put out this message due to the large reach we can connect with, and we thought it was an ideal opportunity this year especially with everyone at home, to get our message out and into people’s radars. That’s the background of where we are. We are very excited and passionate about this issue. We believe our partnership with the IRC can make a difference.

The Super Bowl spot will have a massive audience. Are you doing anything else to support the TV media buy?

This traditional media will be amplified with digital and social media and traditional retail or press, but traditional media is such a scale, we are firm believers that it’s the best way to achieve our objective in terms of reach and building that awareness quickly. Love Letter will also run on Connected TV, on digital across YouTube and organic and paid owned social channels.

We also have a lot of rich content, featuring the people behind the campaign. These are real people that work in hospitality. We look forward to sharing this content on YouTube and social channels. The immediacy of social media is great, we can drive people directly to our website to help these restaurants. Social media gives you the immediacy of a click-through, and broadcast gives you tremendous reach across the nation.

Behind the Brand: Nissan’s Platform of Thrilling Consumers at Every Turn