As President of NTWRK, a “QVC for millennials and Gen Z” app that sells exclusive, high-end merch from A-list pop icons via live-streamed events, Moksha Fitzgibbons was prepared for the worst when the coronavirus pandemic started closing down major cities on March 13. 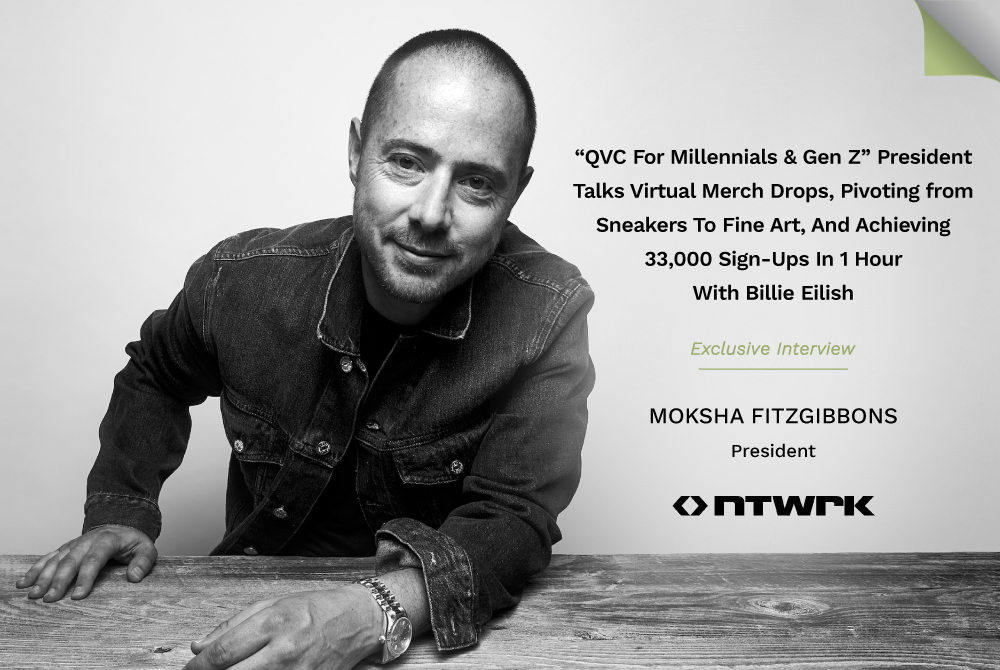 As President of NTWRK, a “QVC for millennials and Gen Z” app that sells exclusive, high-end merch from A-list pop icons via live-streamed events, Moksha Fitzgibbons was prepared for the worst when the coronavirus pandemic started closing down major cities on March 13.

“We didn’t know what it meant for our business,” Fitzgibbons says. “We didn’t know if we would have supply-side issues for people to get their products, or if the talent we work with would still be able to make content.” And perhaps the most uncertain question: would NTWRK’s mostly male, multicultural audience of nearly 2 million users still tune in to NTWRK and spend their disposable income on expensive sneakers, hoodies and other luxury goods in a recession?

NTWRK closely monitored its user activity during the first weeks of lockdown, and noticed even more interest in its content and product drops than the pre-COVID weeks. “We saw people coming to the app at times when we were not broadcasting, late at night going to our past episodes, our in-stock section,” Fitzgibbons says. “That told us that our audience, even if they took a financial hit from an employment perspective, they still had more disposable income due to the lack of opportunity to spend money on socializing, dating, being entertained and the fact that all physical retail was closed. We quickly realized we needed to create more opportunities to engage them, so we scaled up our frequency and product offerings with them.”

As a result, revenue on NTWRK transactions doubled in April from the previous month, and business on the app year-to-date is up more than 400% overall. While pre-COVID sales were driven by the three pillars of streetwear: sneakers, soft goods and other apparel, NTWRK’s recent growth is now driven by sales of fine art, home goods and collectibles — including a partnership with McDonald’s and J Balvin that included exclusive jewelry and giveaways of limited-edition chains from Saint Jewels valued at a cool $150,000.

Prior to joining NTWRK in October 2019, Fitzgibbons spent years in the publishing industry honing his expertise on reaching young consumers, including 11 years at Complex Networks where he helped launch the media brand’s ComplexCon franchise as the company’s chief revenue officer.

Brand Innovators caught up with Fitzgibbons from his home in Miami to learn more about marketing to the new luxury-goods consumer, the ever-evolving role of social media in targeting under-34 consumers and how a recent Billie Eilish live-stream prompted a surge in new sign-ups. The conversation has been edited for length and clarity.

Brand Innovators: You joined NTWRK after a long career with Complex Networks. Given the natural overlap in business models, what throughline did you see between those two roles?

Moksha Fitzgibbons:  I would say NTWRK in a way was an evolution of what we built in a physical space at ComplexCon. [NTWRK CEO] Aaron [Levant], who started NTWRK,  and I worked together on ComplexCon as a joint venture between Complex and his previous company ReedPop, which did Comic-Con and other festival experiences. What was unique and special about ComplexCon is that it brought both entertainment and retail into a physical space. So all of your favorite entertainment artists from the internet were there in physicality and all of the brands you loved were there in physicality. You saw this hybrid connection with consumers who were both entertained and shopping in real time.

I was super impressed by the way people could be entertained and how we could capture great content. We didn’t expect it. We were just floored by the amount of products that people purchased and the fact that they were standing in line for Nike, Adidas, whatever the different brands were that showed up. That started to crystalize for us this really meaningful concept, a hybrid of entertainment and e-commerce put together.

From there we started to look at what are the limitations of that, how do we scale this and how to go beyond a physical event that required people to drive at a minimum, or in some cases fly in, and you had to buy tickets. ComplexCon is a very impactful physical event, but very hard to scale from a national and global perspective. That was the auspice or crystal that launched NTWRK, and our goal has been to create highly engaging relevant editorialized, curated content around highly desirable products that people would want to stand on line for.

What precedent was there for a model like this in North America?

The space of livestreaming commerce is massive in Asia, but no one’s been able to figure it out here in the U.S. I truly believe it hasn’t translated until now because everyone tried to do it just like Asia. The approach was, “We’ll sell anything, there's no curation, no editorialization, let’s get an influencer to pop on a live show and they'll sell water or watches, keychains, eyewear whatever it is.”

That doesn't really work for the U.S. consumer. The U.S. consumer wants to know that there's a value proposition around the product.they want it to feel curated, they want content to speak to them, and get intellectual ammunition or social currency. If you come to NTWRK, you can learn about the product and still be entertained. When you're chatting with your friends on Snapchat, iMessage, you can have a point of view about that product that you can reference what you learned in the content from us. It’s very similar to why people trust a GQ or a Complex, that validation that comes through editorialization and curation is really sought after here in the U.S.

NTWRK’s top categories saw a shift from streetwear to fine art and more home-based goods as quarantine lengthened. What’s driving that, and what are people buying?

When lockdown started happening, we organically started seeing categories like art, home goods, collectibles, take off. And in hindsight it makes a ton of sense. People are spending more time at home, in their apartment. They want to beautify their walls with art or buy collectibles to put on display, so when they’re on Zoom and Google Hangouts they look cool. They want to buy collectibles so when you unbox them you can make a beautiful Instagram or YouTube video and share that out with your friends.

It’s the same behavior where you want the cool sneakers or the cool hoodie so when you go around your friends you get that cache. But now that cache is delivered virtually. And it's all about the aesthetic of your living environment, which is also interesting because all those products I just mentioned tend to be much more expensive than sneakers.

How much of your audience comes from endemic channels vs. paid, and where do you spend most of your marketing dollars for paid acquisitions?

We’re about 60% organic in terms of tying back to custom acquisition and registration, setting up the wallets. Just over half is done organic, and that's just through the marketing of the product drops, the talent or the brands involved. We just did something with Billie Eilish where she unboxed her new collectibles on Instagram, and we got 33,000 new credit cards set up in that hour.

But ad spending is another big piece of our outreach. The most effective for us is the Facebook and Instagram ecosystem. We have started doing more on TikTok, which is starting to become more and more effective for us, we just had to learn that ecosystem. We knew how to buy ads really well on Facebook and Instagram and get them to convert, not just where people download but where people actually set up wallets. We can jump on any platform and buy a bunch of cheap downloads, but can you engage with the right people to actually set up wallets?

And then the newest investment for us in terms of marketing is we created a series of virtual festivals. We had one in August called Transfer. It kind of felt like a virtual ComplexCon. It was two days, with 40 pieces of programming every 30 minutes. It felt like a Coachella lineup where the brand and talent would express themselves through video content and then we coupled that with exclusive products so you could see what’s available at 10, what’s happening at 3. We did that as a test and it resulted in our two biggest revenue days back to back. Day 2 was our highest daily active users ever. It’s interesting because most physical festivals see a drop off on day 2 like Coachella on Saturday vs. Sunday, but virtually it builds from the press and the paid media.

Up next we have a virtual art fair called Beyond The Streets on December 5 and 6 that will bring a physical 3-month installation curated by Roger Gastman that was featured at LACMA and Brooklyn Museum to a virtual setting. We’ll have 50 artists programmed over the two days, each artist will express themselves through virtual galleries and launch 100 unique products created exclusively for this virtual festival.

Do people refer to NTWRK as “the QVC for the hypebeast crowd,” and if so, how do you branch beyond that to reach more audience?

They refer to us as the QVC for millennials and Gen Z. The hypebeast side is where we established our core, which is young, multicultural males. And the reason we have tried to really cultivate that audience is they are the most influential, they’re the hardest to reach, they largely are highly discerning and setting a lot of trends.

But that piece of their influence, their really adoptive nature, we thought was really important given the fact that they’re setting the trends for the future of America. We really focused on them for the first 18 months, and now we’re going adjacent to them. So we have our new focus on art, and we’re doing a basketball festival to stay relevant to the core male center city dweller but also bring in Midwestern consumers. And art is bringing a very affluent audience and probably in some ways what you'd call air quote a more mainstream audience.

And then we’ll do this festival that is all around movie and TV IP called Meltdown, an all-fangirl/fanboy-type virtual Comic-Con. Everyone loves superheroes, their favorite movies and TV, so it’ll still remain relevant to the core but expose us to a whole new audience. We’ll keep building that way with things that are relevant to the core but adjacent to it that can expose us to new audiences. That way, we can really see a year from now what content and products are most relevant to a wide cross section of millennials and Gen Z.