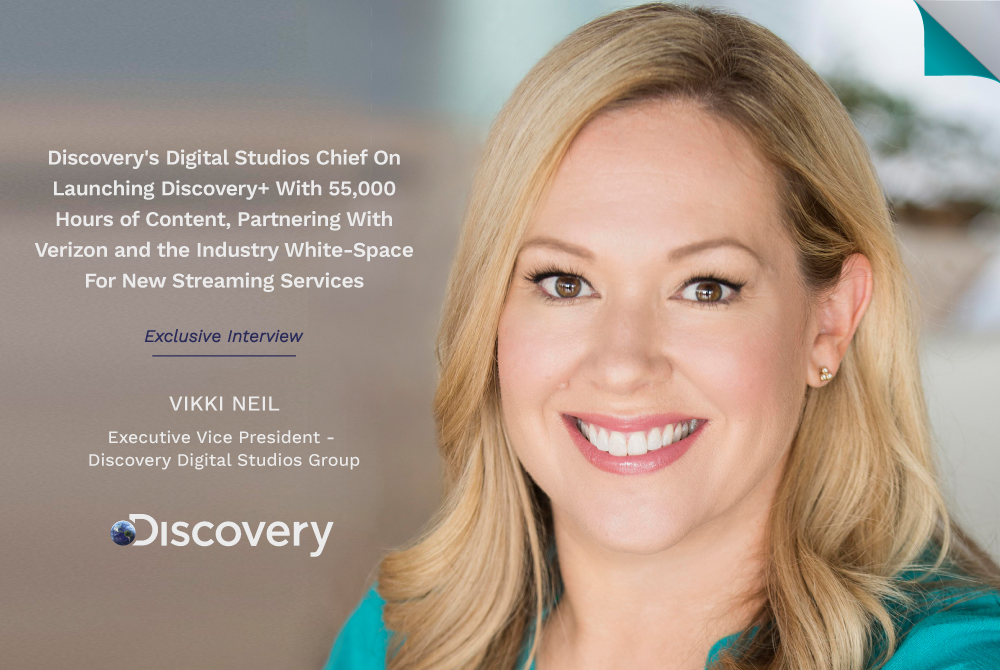 In addition to an affordable price ($4.99/month), Discovery+ debuted with one key differentiator: 55,000 hours of library content. That’s more than any other streaming provider (Netflix, by comparison, is estimated to host 36,000 hours) — culled from the company’s media brands Discovery Channel, Food Network, TLC, HGTV, OWN, ID and the forthcoming Magnolia Network. And with more than 50 original series available at launch, Discovery+ has placed an equally important bet on exclusive content to drive subscribers.

“Discovery is really in a unique position because we produce more than 8,000 hours of original content each year, and we own a lot of [it],” says Vikki Neil, Executive Vice President - Discovery Digital Studios Group, who spearheaded the Discovery+ launch from a marketing and brand positioning perspective. “And that means we can take that and put it anywhere we want, which is a huge advantage. I was just hearing today that we had 5,000 pieces of creative that we used for launch, from TV spots down to social posts, across every single platform and funnel. That’s taken an enormous orchestration of the entire company. It’s been a very exciting, career-redefining moment.”

Among the service’s most-anticipated originals are “Magnolia Table with Joanna Gaines” and “Fixer Upper: Welcome Home,” the first previews from Chip & Joanna Gaines’ Magnolia Network (a rebrand of the HGTV offshoot DIY Network), set to debut in over 50 million homes later this year. The Gaineses represent just two of the widely recognizable personalities that Discovery+ has leaned on to spread the word of its launch, alongside celebrity chefs Bobby Flay and Giada de Laurentiis (costars of the Discovery+ original “Bobby and Giada Go To Italy”), Prince William (who hosts original docuseries “A Planet For Us All”), Jonathan & Drew Scott (“Property Brothers”) and many more.

“Our talent are some of the biggest assets we have, because most of our talent they’re not actors [known for playing characters], they really are that person,” Neil says. “They have an authentic love for our programming that we couldn’t buy, as much as anyone would love to, and it’s a great way to earn the trust of our audience.”

Though it’s too early for Discovery+ to share any user figures, Discovery CFO Gunnar Wiedenfels recently told investors the service entered the U.S. market with an addressable audience of 70 million homes (nearly 30% of the country’s 300 million broadband homes). That reach is aided in part by Discovery+’s partnership with Verizon to offer complimentary 12-month subscriptions to the wireless company’s Unlimited customers.

Brand Innovators caught up with Neil from her home in New York to learn more about developing the service’s brand, its robust launch campaign (the biggest in Discovery history) and why she still sees white space in the busy OTT landscape. The conversation has been edited for length and clarity.

Brand Innovators: Discovery+ launched right out of the gate of the holidays on Jan. 4. How did you arrive at that timing?

Vikki Neil: It was a good debate for a while, but at the end of the day it was a joint decision with our major partner Verizon. A lot of people get new devices over the holiday, and Verizon is hot in the market around those times as well. So when people get all those new devices, the first thing people want to do is start watching content. It was a great way to really hit that note and make sure people knew we had something exciting coming as we headed into a new year.

Did the election news cycle present any obstacles from an ad inventory or brand association perspective?

It's really hard to launch during a presidential election year, regardless of what it is. But we did some buys for branding and awareness, and it evolved every week. It was interesting to watch. There were a couple times where I was thankful we didn't buy certain things, and others where I’d say, “Wow, I didn’t realize we were going to get that much promotion while we were running in news.” Everything was different last year, it was a once-in-a-lifetime experience — one I hopefully won’t have to repeat anytime soon.

But regardless of what’s happened this year between politics and the pandemic — the nasty peas, as I like to call them — our goal has been to provide something that allows people to escape. I think whether you're into home improvement or you’re really into paranormal, food, crime or lifestyle, we have something for everyone.

How did you approach the brand’s visual identity?

For the logo itself, that was one of the longer elements to develop. Even our CEO [David Zaslav] was very involved in wanting to make sure it spoke to our heritage, and also had a nod to the future. And I think it does that nicely. Discovery Channel is part of who we are, but it’s also so much more than that. It expresses all the colors and the genres and the networks we represent. And it also works globally, we worked closely with our teams around the world to take that identity and really apply it. That's a really big element of when you're developing a new brand, thinking about how it translates across multiple regions and countries.

What did your marketing rollout look like from both an on-channel and off-channel perspective?

The major note is this is the largest media and marketing launch in the company’s history. And we left no opportunity untouched, no stone unturned. Every network that we have, we’ve been running promos across every single network. We’ve been doing lower thirds on each network and channel, and most of those things are very much relevant to someone that is watching the network.

We were also using it to drive complete brand awareness. We have an amazing media team and they’re able to measure the conversions of what’s really working. As I sit on the creative side of things, it's great to be able to turn around and ask my media partner internally which spots are performing. Very few companies are able to dig in and tell you that level of data so quickly, and really optimize how we’re talking to people and learning the nuances of what's important to them. Is it “download and stream now,” is it “subscribe”? Those little meaningful tweaks are part of the optimizations our team is still uncovering.

Off-channel, we’ve been running TV spots, a ton of digital ads, everything from what I would consider brand-building digital to lower funnel marketing. Radio ads, print ads. And then we’ve done a ton on social. One of our very first pops we saw was from TikTok, we took a really interesting, straightforward piece of creative and modified it for TikTok and it really just drove great awareness for us within one day. That was a great moment. News and other places like that really perform for us. It’s been interesting to watch and understand a little bit more around all the media and how different creative resonates on different platforms.

What consumer research or insights influenced how you packaged the service, like the $4.99 price point or the exclusive bundles & trials with partners like Verizon?

We did a ton of research just around price. We analyzed that carefully to determine every aspect of the product. At the end of the day, we think that was a good sweet spot. We want this to be accessible for people, and we already see Discovery+ as this great companion to all the other services that offer this type of content. We wanted to make sure price was not a barrier but an incentive for people. We’ve since heard anecdotally that we hit the sweet spot and it’s doing well for us.

What have you learned about building and gaining share in the crowded OTT landscape thus far? How much white space do you think there is for a service like Discovery+ compared to what’s already in-market?

We saw research that told us about half of U.S. households subscribe to multiple streaming services, and that tells you where the mindset of people is. There’s a lot of “cord-plusers,” which is what I think of as people adding more on [to a cable subscription], and that number continues to grow. So if you look at our differentiated content, the talent and characters that people love and the attractive price point, we felt that viewers will see this as a natural complement to those other services. It’s a small investment of what they’re gaining with the library and all the originals we have coming out, and it’s distinct and different.