Lynne Blashford, CMO at White Castle, will hit her 10-year anniversary at the company in September. While 10 years is an increasingly rare amount of time to spend at one company, that’s a relatively short tenure at White Castle. 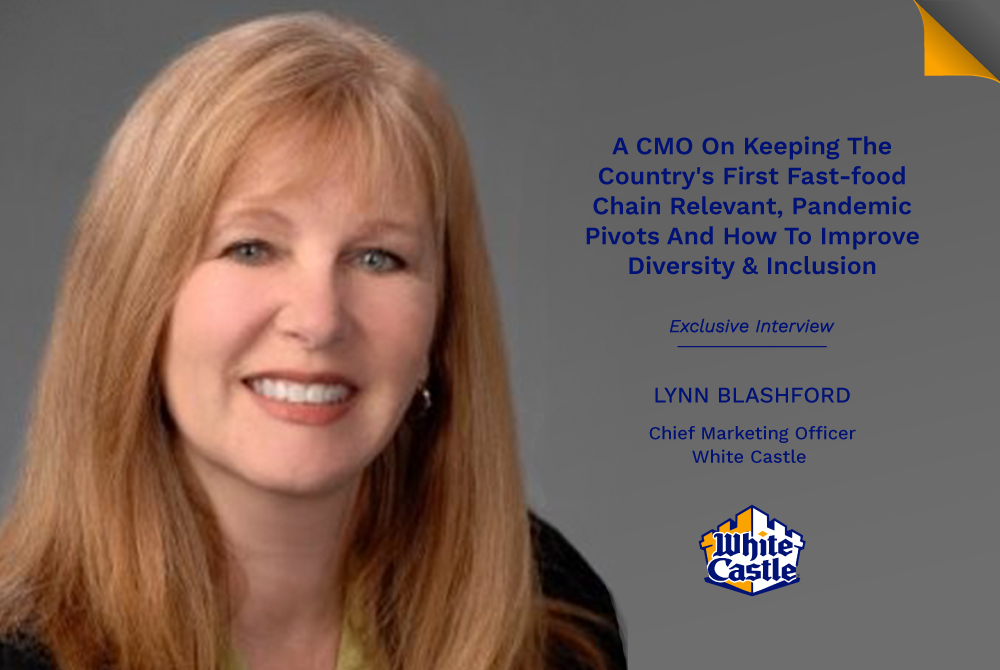 Lynne Blashford, CMO at White Castle, will hit her 10-year anniversary at the company in September. While 10 years is an increasingly rare amount of time to spend at one company, that’s a relatively short tenure at White Castle.

“At White Castle, because of the culture and the fact that it’s a family owned business, 10 years is nothing in terms of tenure,” sayd Blashford. “We still have a lot of people at White Castle who take a job here, and stay forever.”

Like any other fast-food business, White Castle had to quickly pivot its marketing and restaurant operations as the pandemic took hold in the U.S. in March. The nearly 100-year-old chain was in some ways luckier than others, as it not only has a restaurant business, but a grocery business as well. With its drive-thrus able to remain open, and with its frozen sliders selling in groceries stores, the brand was able to  remain relatively stable throughout lockdown.

“People were less frequently going out, but in the grocery stores, people were buying more in bigger quantities. On the restaurant side, the checks got bigger, even though people were coming less frequently,” says Blashford. “Being privately held, having both the CPG business and the restaurants allowed us to sustain ourselves throughout this. Grocery has surged to the point where our manufacturing is keeping up, but certainly beyond anything we would have planned.”

White Castle is credited with being the first fast food burger in the country. It was founded in Wichita, Kansas 1921 by Billy Ingram, and with a $700 investment, he launched a business selling five-cent hamburgers by the sack. It’s since grown to a chain with more than 350 locations in over a dozen states. To this day, it remains a family owned business and is now run by Ingram’s great-granddaughter, Lisa Ingram.

Blashford joined the White Castle in 2010 as Director of Marketing, was later promoted to VP of marketing, and became CMO just this past January. Prior to her time at White Castle, she was in marketing and field sales at Donatos Pizza, and before that Long John Silver’s.

Brand Innovators caught up with Blashford from the White Castle headquarters in Columbus, Ohio. Blashford says employees are slowly returning to the office with about 50% capacity, she says, on a rotating schedule of two to three days a week. This interview has been edited for length and clarity.

How has White Castle's positioning changed since you've started nearly 10 years ago? Would you say it's evolved a lot as trends come and go?

We’ve evolved significantly on the restaurant side in the last 10 years. When people think of White Castle, they think of the core product: the slider, with steam-grilled onions.That product has been synonymous with us for decades. But in the last 8 years, the product development team has helped us expand the breadth of our menu, and really expanded our customer base. We’ve gone from being known for just beef sliders to being what we call slider experts. So whatever protein or item we put on the bun, it allows us to create more variety on the menu and bring in people who might not be interested in beef

We now have an Impossible slider, a fish slider, breakfast sliders. Going from being burger-based sliders to having a variety and being slider experts has been the major shift in the positioning in the last 8 to 10 years. That allows us to address trends. Whatever that protein or vegetarian option is, it gives us more breadth of menu.

The other piece that’s helped us is not what people are eating but when they're eating. We’ve only had burgers for so long, since 1921, and we were serving burgers, even at breakfast, 24 hours a day. So about 80% of our restaurants are open 24 hours -- not counting the moment right now, because there are obviously restrictions, but in a normal world we’re open 24 hours. Being able to satisfy people whenever they want, and with whatever kind of slider they want is important. This also helped the CPG side with our frozen sliders at grocery stores. That trend of eating whenever you want has benefited us, because people can buy them frozen and then cook them whenever they want at home.

Portion size has been a good for us too. Sliders are the perfect portion if you don’t want a big sandwich. You can have one or two as a snack or more for a meal. Having petite petite has helped people looking to cut back on portion sizes.

When did you start selling products outside the sliders, like the Chicken Rings?

We’re in the middle of chicken ring promotion right now. We do that about once a year to call attention to them. They were added to the menu 20 years ago and they're very very popular with kids. The customers for these tend to skew younger and female.

So before then, did White Castle really only offer the sliders?

We’ve been doing breakfast about 25 years now, and can cook eggs and bacon for breakfast sliders, but before then, yes, we were very beef-slider centric. For about 75 years we were very beef centric and still are to an extent. We didn’t even start adding cheese to the burger until 1962.

How have you changed your marketing strategy amid COVID? Did you rework any messaging or change the media mix?

There are two components to that: the messaging shift as well as the mediums that were shifted with the budget. So out of the gate, as we were unsure what was going to happen, there was a pause in ad dollars as the restaurant side closed when everyone started locking down. We wanted to assess and monitor day by day.

The restaurant side is coming back as well, so we’ve been able to dial back on spending because the natural course of what’s happening with the business right now means it’s really sustaining itself. We’re able to be more efficient with spending. We’re looking at where we need to promote things. We’ve also shifted to more social and shifted the creative right away. We had just finished filming a couple days worth of content in New York to last us a year when this all happened, but we can’t show that work right because it shows a dozen people hanging out together. We quickly pivoted and were able to use some of the filming because it showed families at home. We shifted to this idea of “from our castle to your castle.”

We also shifted messaging to have more sincerity. We’re a fun brand, but the sentiment at the time wasn’t feeling fun and joyous We pivoted a lot of social messaging around #feedthesoul #cravethegood, where they were about delivering products to hospitals and caregivers. That went on through June.  We looked at the sentiment of communities and looked at how we can help.

White Castle pledged to be part of the #StopHateForProfit campaign, boycotting Facebook’s platforms for the month of July. Have you noticed not advertising on Instagram or Facebook has affected sales at all? Any other observations?

We’re not spending on Facebook or Instagram. We’re posting organically, though. We did want to continue to organically share because that’s where some of our best content comes from -- customers who are sharing the fun things they're doing with their families or individually.

I haven't noticed any negative changes in not spending on Facebook or Instagram. Our business analysts also say that this time is so disruptive that to be able to distinguish any one medium’s impact on it is going to be very hard. We haven’t seen any impact to our business -- grocery sales are still surging, and the restaurants are still strong in drive-thru.

And will you continue the pledge beyond July?

It’s TBD how long we keep this us. We obviously want to share in the solidarity of the movement. While Facebook may not be meeting the standards outlined right away, they are starting to make changes, and I do see them moving in a direction that’s addressing some of the hate that was called out. We’re going to evaluate a dn make a decision soon on whether we should continue through the end of the year. It’s hard because every platform has its drawbacks. None are perfect. YouTube, for example, a couple years had problems with brands being associated with content they didn't want to be associated with. We’re somewhat accepting that there’s imperfection inhumanity, and when we see companies doing the right thing, that is a positive thing and we want to give credit.

In light of Black Lives Matter and racial injustice, how is White Castle working to improve diversity internally, not just at the restaurant level but at the corporate level? Are you looking to increase diversity in the marketing department, for example?

We share data externally at the restaurant level. About 65% of restaurant managers are diverse. We work in very diverse communities. In the home office in Columbus, it is a little less and the senior leadership team has put an acceleration on the diversity focus. We’ve always been diverse, but we’re looking at how to more proactively address this. We’ve had unconscious bias training. And from a recruitment standpoint, where we’re making sure we’re bringing in diverse candidates.

One challenge we have in the home office is that we don't have much turnover, so we are looking at what else we can do, and how are we making an impact to address racism by every single person, in ways that’s not just by employment numbers? We  also created a reflection series of people sharing in an internal newsletter the racism they've personally experienced throughout their lives.

We’re also working with a professor out of Harvard who specializes in root-cause analysis. A lot of companies want to move to action, but this professor says that you’ve got to look a couple steps back and understand the cause of some of these aspect of racism and why we are where we are so that when we go to make changes, we’re making the right changes and not something that’s superficial.

We’re also expanding our D&I team in our home office and we have a couple people from the marketing team on that. And we’re looking at other actions to accelerate the pace of addressing racism. Ultimately, we’re taking a pragmatic approach--we want to make sure anything we do is truly meaningful.