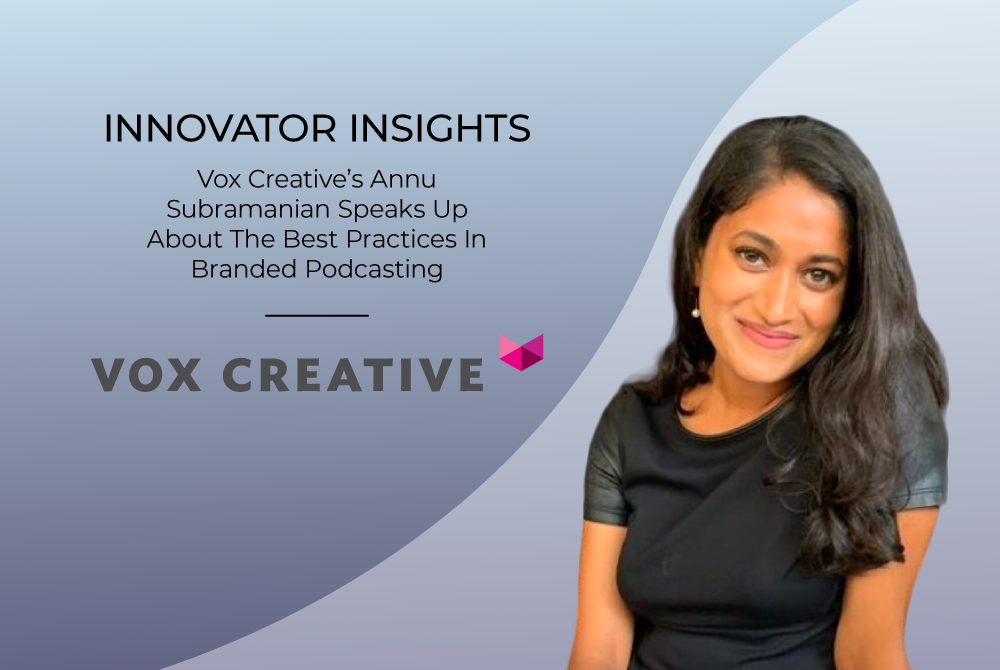 “In the same way that brands have to have an Instagram presence or a Twitter presence now, they will need to be able to tell their story on a podcast feed soon enough,” the supervising producer for branded audio at Vox Creative says.

“It’s an opportunity for them to not just say who they are, which is valuable, but there's also the element of aligning with customers and participating in storytelling that shares their values.”

If anyone would know, it would be Subramanian and her team. Vox Media is well-known for its editorial podcasts such as Today, Explained from Vox and Pivot from New York Magazine. On Nov. 16 it announced plans to acquire podcast studio Criminal Productions and in April it acquired Preet Bharara’s podcast company Cafe. And this past October, Niemlan Lab featured Subramanian in a story about Vox Creative’s’s innovative approach to creating podcast transcripts with highly immersive visuals.

Those skills and track record give Vox Creative credibility as more CMOs begin to take notice of podcasts as a channel to reach their target audience. This is despite the uncertainty that the COVID-19 pandemic introduced.

“So much of what we saw in the podcasting industry was the success is tied to commutes. And, you know, with so many people's commutes gone, the question was, are we going to lose listeners, are they going to drop right away?” she said. ”We didn’t see that. We're already doing well and the pandemic precipitated that. Our audience across Vox Media Podcast Network has been growing.”

Listen up as Subramanian shares some of her top tips on making a branded podcast:

The Best Podcasts Are Created From Two-Way Conversations

Marketing departments often have decades of experience producing billboards, digital ads and creative to sponsor events. Podcasts are still somewhat new territory for many brands, which is why working with an organization like Vox Creative may make sense.

Subramanian said that while brands could still make podcasts on their own, she and her team can provide valuable insight into what works, what doesn’t and ultimately what will reflect best on the brand behind the audio.

“We're not just executing. We're actually seeing podcasts very strategically, in partnership with brands. This is something that we're very much co-creating, especially at the development phase, rather than simply getting a set of ideas and then making something,” she said. “Our North Star is that we’re part of Vox Media, and so that care and attention to the quality and the audience is always going to be there.”

"The clients where we have the most successful partnerships are the ones where we're not going in with them saying, 'We need you to make a show about us,” she said.”We go in kind of mutually excited, talking about what do we want to convey and what hasn't been told before.”

A good example would be Who We Are, a narrative podcast for Ben & Jerry’s that chronicled the history of racism in America. “We aligned with the brand early on, that there could be negative backlash from people who weren’t on board with the topic and understood that was okay. As a result we created an incredibly meaningful podcast that we heard was ‘required listening’ negative feedback.

Consider The Full Range Of Podcasting Possibilities In Marketing

CMOs have options: they can create a branded podcast that serves as a standalone marketing initiative, or use a podcast as part of a series of tactics or an integrated campaign. Who We Are from Ben & Jerry’s is a good example of the former, Subramanian said, but Vox Creative has also worked with Straight Talk Wireless to produce More Than This, which was part of a campaign that spanned both podcast episodes and articles. Another client, QuickBooks, offered Vox Creative the opportunity to add a rich dimension of storytelling about entrepreneurialism that complemented videos and articles the brand was running as well through a format Vox Creative calls branded segments.

“There is a lot of benefit when building campaigns in making sure that audio is on that list,” she said. “For so long we've said, ‘Okay, so we'll do videos, maybe we'll do an experiential activation. Maybe there'll be articles.’ But why isn't it a podcast there? And now we're seeing there is, or in some cases custom audio segments on an existing podcast.”