When Tom Cox looks back on the unprecedented events of 2020, he sees a bright spot for marketers that can’t be ignored: according to the president of Premion, this was the year that advertising-supported streaming TV truly came into its own.As the leader in local OTT and CTV advertising, Premion offers brands opportunities to target consumers at both a national and local level across more than 125 premium-branded networks. 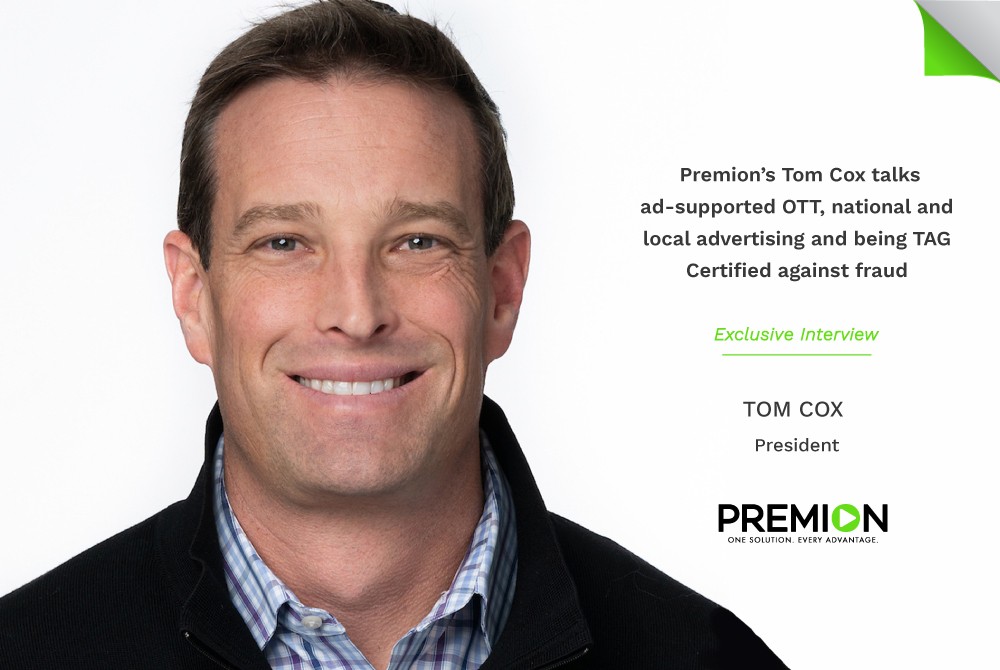 When Tom Cox looks back on the unprecedented events of 2020, he sees a bright spot for marketers that can’t be ignored: according to the president of Premion, this was the year that advertising-supported streaming TV truly came into its own.

As the leader in local OTT and CTV advertising, Premion offers brands opportunities to target consumers at both a national and local level across more than 125 premium-branded networks.

While the surge in ad-supported OTT viewing hastened during the pandemic as more home-bound consumers sought more entertainment options, Cox sees it as the fruition of a consumer shift that Premion spotted early on.

“We were already on this trajectory that has been propelled further by the pandemic,” he says. “You can estimate it as a three to five-year acceleration of where ad-supported OTT was already headed.”

Unlike subscription streaming services, ad-supported OTT offers free content and gives brands a way to engage with viewers by aligning themselves with highly popular content.

Big Reach At Both National And Local Levels

While ad-supported streaming faced some challenges early on such as low inventory and a seemingly endless succession of the same commercial spots running during the same show, Cox says those issues have largely been addressed.

“Our industry has made significant progress with frequency capping as there’s simply better technology in place from an ad serving perspective to limit ad frequency.  Further, increased demand for OTT inventory has resulted in fewer empty ad pods,” he says. “As a result, the consumer ad experience has improved significantly.”

Overall, Cox describes OTT and CTV as a combination of the best of digital advertising — with its measurement and attribution capabilities — and the best of the big screen TV experience in long-form, lean-back premium and brand safe content. As such, Cox predicts more marketers will look to OTT and CTV as a way of extending their reach among cord cutters and cord stackers, but with greater precision.

“On the national side, streaming businesses can no longer be ignored. Large advertisers need to be where the eyeballs are,” he said. “And as businesses navigate and prepare for reopenings or more lockdowns, advertisers are prioritizing a more localized approach to campaigns.”

The ability to geo-target and facilitate dynamic creative makes local campaigns all the more compelling. Cox said, “between the TEGNA stations, the Premion sales force and the Gray Television stations we brought on as a strategic partner, we have feet on the street in markets reaches more than 70 percent of U.S. households.”

With the increase in ad fraud entering the OTT ecosystem, preventing ad fraud is another advertiser priority. Cox says that Premion treated ad fraud protection as a strategic imperative from the onset and recently earned the Trustworthy Accountability Group’s “TAG Certified Against Fraud” seal. “Marketers need to begin looking for those kinds of credentials as they choose where to allocate their budgets,” Cox said, “while also looking for partners that work with trusted and valued publishers instead of open exchanges.”

New innovations make streaming TV even more compelling for advertisers. Cox states that brands can now look beyond video completion rates as a key metric of success as they can now connect OTT viewership to direct business results with closed-loop attribution. This could be as granular as running an automotive ad on OTT and then determining how many people visited a dealership or a dealer website after viewing an ad.

Looking ahead, Premion sees more experimentation with ad formats where brands can reimagine the ad creative they use on CTV and OTT. Cox cited “storytelling” ads where a brand’s narrative is broken up into three or four segments and delivered in succession on a particular program or channel.

This doesn’t mean traditional TV is going away, of course, and some brands may still look at major live sports broadcast events like the Super Bowl to reach the masses. “But with the availability of richer data for audience targeting by location as well as behaviors and interests, OTT offers a more cost-effective way to extend reach and minimize waste in ad spending, that’s highly appealing to advertisers,” says Cox.

At the same time, Cox is already noticing premieres on streaming platforms that are drawing a significant audience to tune in. “As ad-supported OTT becomes a more dominant platform, there are shows, or series, that consumers will not be able to get any other way,” he said. “That means we’re going to see some windows where brands that think strategically are going to be able to see even larger viewership numbers on OTT, and highly desirable audiences as well.”

In looking ahead, Cox summed up, “Ad dollars follow where the consumers are, and 2021 is poised to be an even bigger year for streaming TV advertising.”