The latest Spider-Man movie may include the title, “No Way Home.” But don’t tell that to Hyundai, which, as part of its multi-picture deal with Sony Pictures, provides Peter Parker with a lift to his New York home. 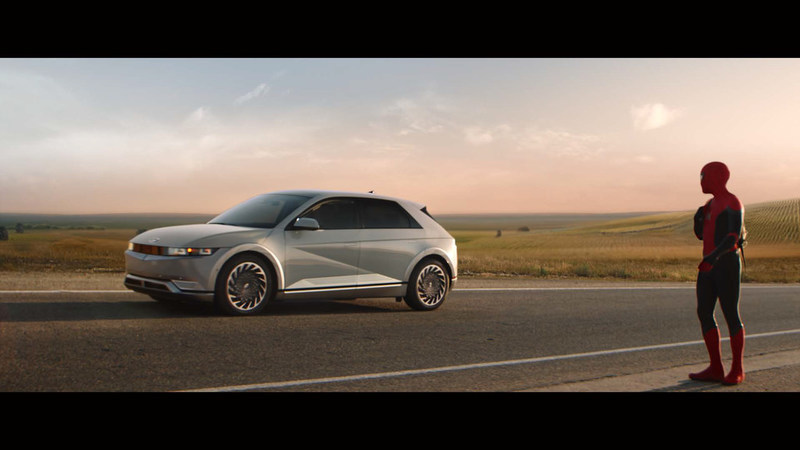 The latest Spider-Man movie may include the title, “No Way Home.” But don’t tell that to Hyundai, which, as part of its multi-picture deal with Sony Pictures, provides Peter Parker with a lift to his New York home.

In a global commercial (directed by Spider-Man film franchise director Jon Watts), Peter Parker (Tom Holland) sits alone in a rural motel watching news coverage of his secret identity reveal (an event that occurred during the previous Spider-Man movie). Determined to clear his name, Parker dons his Spider-Man outfit and heads outside, only to find no tall buildings to enable his signature swinging. Dejected, Parker begins walking home when his friend, Ned (Jacob Batalon) pulls up in a Hyundai electric Ioniq 5 to offer a lift. The spot concludes by showing they have 300 miles to reach New York City, which is the range limit of the new electric car.

A 30-second version of the spot will run on television in markets including the U.S., Europe, China, Russia and other markets through January 2022. In addition, Hyundai has created a 30-second commercial featuring its Tucson compact SUV, showing key scenes from the film featuring the car.

In addition to the commercials, Hyundai will promote the partnership on its social media channels, including chances to win a special edition “Hyundai Ioniq 5 x Spider-Man: No Way Home” special edition poster and customized digital wallpapers.

The marketing effort stems from a multi-picture promotional partnership Hyundai Motor forged with Sony Pictures in 2020. Through the partnership, Hyundai will showcase its vehicles and technological innovations via product placement in Sony films. Both the Ioniq 5 and Tucson will appear in the upcoming Spider-Man release.

“The placement of the all-electric Ioniq 5 and all-new Tucson in ‘Spider-Man: No Way Home’ marks the first meaningful milestone in the strategic partnership between Hyundai Motor Company and Sony Pictures,” said Thomas Schemera, global chief marketing officer and head of customer experience for Hyundai Motor Company, in a statement. “We expect great marketing impact from this collaboration. This exciting film and the two vehicles’ inclusion in key moments of the storyline played by the main characters will exhilarate the minds of millions of viewers around the world.”

Following the “Spider-Man: No Way Home” release, Hyundai will continue its marketing partnership with Sony via integrated promotions for “Uncharted” (releasing in February 2022) and the sequel to the animated film, “Spider-Man: Into the Spider-Verse,” which is scheduled to premiere in October 2022.