Domino's Pizza has teamed up with Netflix’s Stranger Things to promote a new feature in its app that lets consumers order a pizza with their minds. 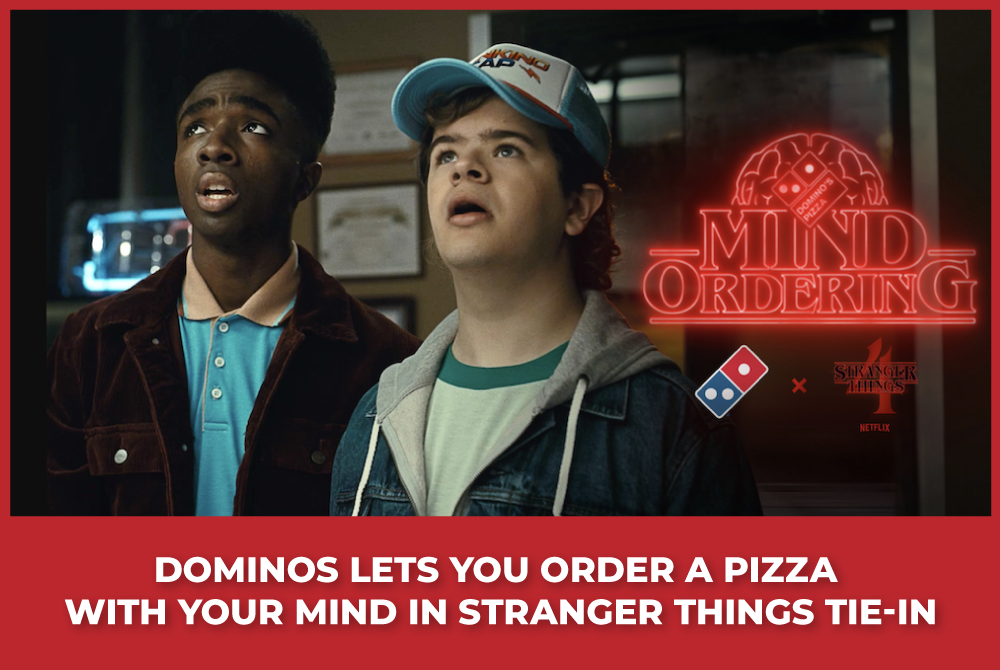 Domino's Pizza has teamed up with Netflix’s Stranger Things to promote a new feature in its app that lets consumers order a pizza with their minds.

"Is mind ordering real? At Domino's – it absolutely is," said Kate Trumbull, Domino's senior vice president of brand and product innovation, in a statement. "Domino's customers and 'Stranger Things' fans can now channel their inner Eleven by using telekinetic powers to order pizza with their mind."

The gimmicky feature is tied to promote Season four of the iconic TV show which. Volume 1 premieres on Netflix on May 27 and Volume 2 on July 1.

Consumers must download the app and then create a Pizza Profile. In the app, visitors are encouraged to visit the Hawkins National Lab option to come up with an order from their mind through telekinetic mind tests that allow them uses facial recognition and eye-tracking technology to order pizza. Consumers can also look for Easter Eggs on the app and report any sightings of the Noid to the Hawkins Police Department on the website.

"We're geeked to launch this first-of-its-kind mind ordering app, just in time for the premiere of 'Stranger Things' new season," said Trumbull. "Now hungry customers and 'Stranger Things' fans across the U.S. will get a taste of what it's like to be Eleven, and they may find some hidden surprises along the way, such as the Noid or Demogorgon."

The pizza chain has also created a retro-style 1980s pizza box for medium and large pizzas to promote the TV show’s release.

“Stranger Things,” brand tie-ins have been a large part of the show for Netflix. The last time the series dropped a new season, Burger King created “The Upside Down” Whopper, a burger packaged for the creepy parallel world in Stranger Things. Baskin Robbins created a real-life version of the Scoops Ahoy Ice Cream parlor – the ice cream shop featured in Season 3, along with limited-edition flavors inspired by the show. Additionally, Doritos is hosting a virtual music festival in June that will take place in the Upside Down.