Brands Begin To Step Up To Fight Racial Injustice 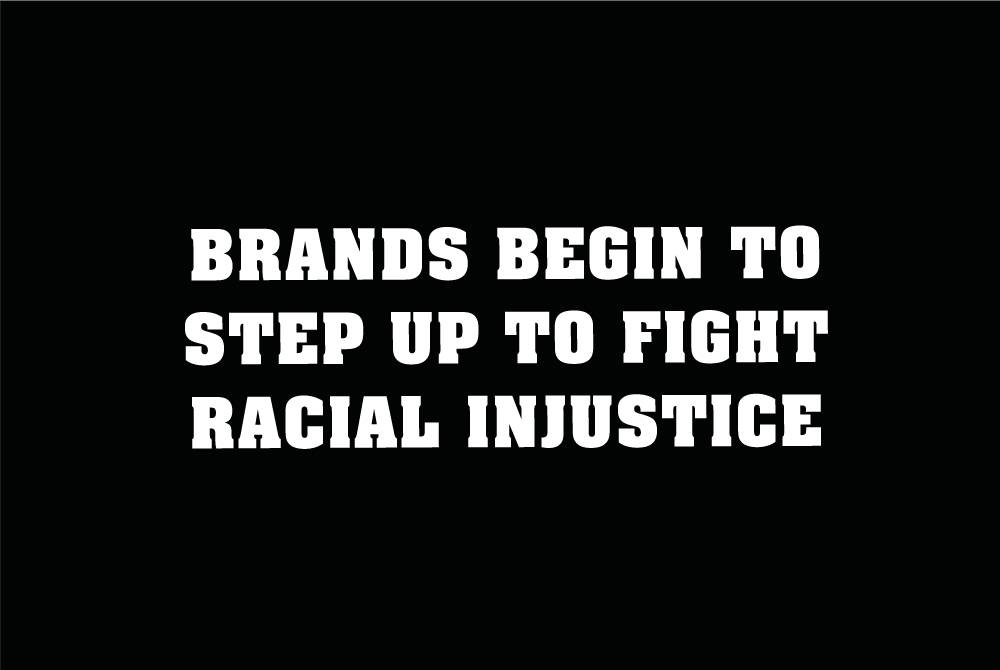 In the past, brands have been reluctant to speak out about racial injustice. The blowback that pioneering brands like Nike and others received from their previous support of key issues and figures in the black equality movement has kept others on the sidelines.

But in the last week, the tide has begun to turn after the death of George Floyd, who was killed May 25 after a Minneapolis police officer, who was later charged with second-degree murder, put his knee on Floyd’s neck for nearly 9 minutes and cut off his air supply.

While many companies released statements with the expected platitudes condemning racism, others went beyond the status quo. A growing list of companies and their marketing teams have announced long-term financial commitments for everything from donations to key social justice organizations to funding for initiatives that support black-owned small businesses and entrepreneurs. Others have used their donations to aid local bail fund organizations, providing direct financial aid for protesters across the country.

Below is a collection of some of the brands that have made significant commitments and financial pledges of $500,000-plus to fight inequality and racial injustice:

Three of the earliest companies to announce major initiatives were Glossier, Peloton and Lyft, who each rolled out financial commitments of $500,000 on May 30, May 31 and June 1, respectively. Glossier’s donations were allocated to five organizations: Black Lives Matter, The NAACP Legal Defense & Educational Fund, The Equal Justice Initiative, The Marsha P. Johnson Institute and We The Protesters, with an additional $500,000 allocated toward grants benefitting black-owned beauty companies. Peloton donated to the NAACP Legal Defense Fund, with a pledge to do more internally as users called out their predominantly white leadership and instructors. And Lyft announced $500,000 in ride credits to the National Urban League, NAACP, National Action Network, Black Women’s Roundtable and National Bail Fund Network as part of its LyftUp initiative.

Those companies and others’ swift response quickly raised the bar for both financial commitments and pledges for structural change. Arguably the largest monetary commitment to date has been the one from Bank of America, which on June 2 announced it was making a $1 billion four-year commitment to help local communities address economic and racial inequality accelerated by the pandemic. B of A had already been making commitments in local markets. But the newly announced efforts will “sharpen the focus of that work,” the company said in a press release, across four areas: health, job skills, small business support and housing. “The events of the past week have created a sense of true urgency that has arisen across our nation,” CEO Brian Moynihan said in a statement, “particularly in view of the racial injustices we have seen in the communities where we work and live. We all need to do more.”

Other companies who’ve announced substantial pledges include Moet Hennessy, who established a $3 million small business recovery initiative, Unfinished Business, to provide specific funding to One Hundred Black Men, the Asian American Business Development Center and The Hispanic Federation to accelerate financial support to the hardest-hit communities. Lego on June 3 pledged $4 million to “organizations dedicated to supporting black children and educating all children about racial equality.” The toy company also pulled marketing for any of its products featuring police characters or stations from third-party sites, as confirmed by The Toy Book.

On June 1, Verizon unveiled a $10 million commitment to seven organizations: The National Urban League, The National Association for the Advancement of Colored People, the National Action Network, Leadership Conference for Civil and Human Rights, the Rainbow Push Coalition, the National Coalition on Black Civic Participation and the NAACP Legal Defense and Educational Fund. McDonald’s shared similar support when it debuted a commercial, “One Of Us,” on June 3 featuring seven names of both male and female black victims of police brutality — Trayvon Martin, Michael Brown, Alton Sterling, Botham Jean, Atatiana Jefferson, Ahmaud Arbery and George Floyd — to show their solidarity. The campaign was supported by a $1 million to the NAACP and the National Urban League.

While focused less on monetary contributions, the Ben & Jerry’s statement released Tuesday said “we must dismantle white supremacy” and that “silence is not an option.” In a post titled, “It’s Time To Talk About Reparations,” the company detailed four action items that include urging congress to pass H.R. 40, which would create a “commission to study the effects of slavery and discrimination from 1619 to the present and recommend appropriate remedies.” Other action items include creating a national task force that increases police accountability and ends racial violence. You can read the full statement here.

"What happened to George Floyd was not the result of a bad apple; it was the predictable consequence of a racist and prejudiced system and culture that has treated Black bodies as the enemy from the beginning,” said the 700-word statement. “What happened to George Floyd in Minneapolis is the fruit borne of toxic seeds planted on the shores of our country in Jamestown in 1619, when the first enslaved men and women arrived on this continent.

Intel’s statement also said that sitting on the sidelines was not an option. The company pledged $1 million to efforts to address social justice and anti-racism across various non-profits. It also encouraged employees to donate to the Black Lives Matter Foundation, the Center for Policing Equity and the NAACP Legal Defense Fund, which the memo noted are eligible for Intel’s employee donation matching program.

“I challenge every one of us to ask ourselves the hard questions,” said Intel CEO Bob Swan in a May 31 memo to employees. “Am I building an inclusive team? Am I making it possible for everyone to show up at work as their whole selves? Am I role-modeling humanity? What more can I do —  especially right now?”

Meanwhile, Facebook said it would commit $10 million to organizations working on racial justice. But the company has been under fire for not moderating President Trump’s posts -- a stark contrast to Twitter and Snapchat, which have responded to the president’s incendiary comments made both on and off-platform. Snapchat said it will no longer promote President Trump’s account because his public comments off the site could encourage violence. Twitter said last week flagged Trump’s tweets for misinformation and inciting violence.

It remains to be seen how many companies will commit to make actionable change in the long run, particularly around commitments made to inclusivity and diversity within their own ranks. In the short term, though, we can expect to see more brands announce contributions toward causes that pledge to advance racial justice -- something we wouldn’t have seen just a few years back.