Sunglasses and apparel company Oakley is marking its second year as an official on-field partner of the NFL with new team partnerships and a new campaign that speaks to the times. The “We Shape The Future” effort stars Team Oakley’s football athletes Patrick Mahomes II and Lamar Jackson, and features JuJu Smith-Schuster, Derwin James Jr., Aaron Jones and Trevon Diggs. 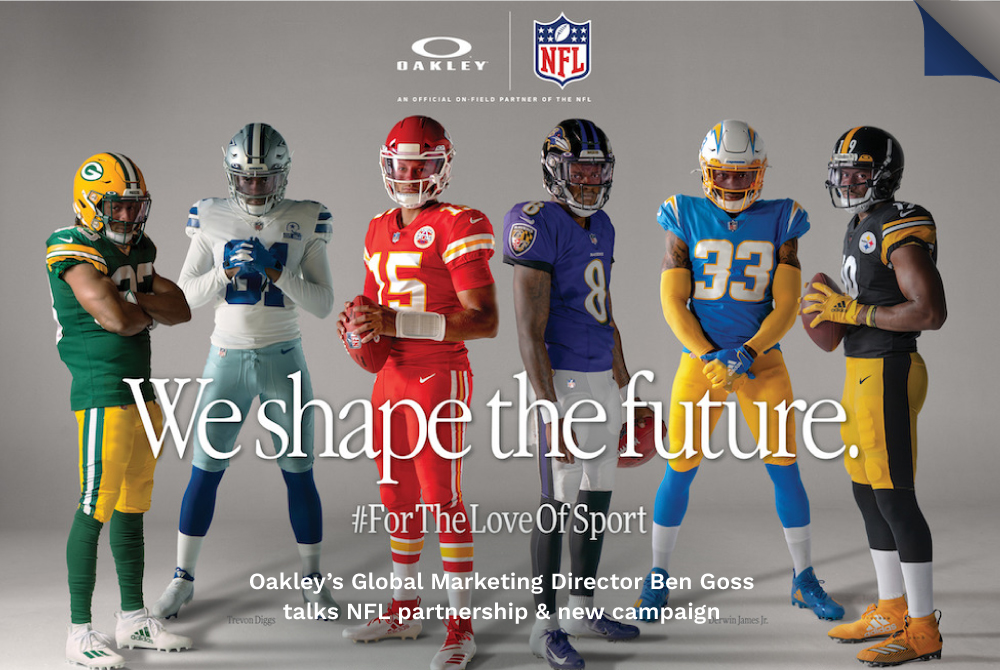 Sunglasses and apparel company Oakley is entering its second year as an official on-field partner of the NFL and is marking this distinction with new team partnerships and a new campaign that speaks to the times.

The “We Shape The Future” effort stars Team Oakley’s football athletes Patrick Mahomes II and Lamar Jackson, and features JuJu Smith-Schuster, Derwin James Jr., Aaron Jones and Trevon Diggs. In the spots, the players are celebrated for staying focused on their dedication to the sport and their commitment to their larger communities, even as they have been criticized by some for their support for the Black Lives Matter movement.

“Last year was our first year as an NFL partner and we made that announcement in a big way – a full billboard takeover in Times Square, a first person POV commercial, new athletes, teams and more,” says Ben Goss, Global Marketing Director at Oakley.

“As we were working on our creative narrative for Season Two, we would have been remiss to have ignored the year that 2020 has been, so we addressed it head on,” Goss adds. “We Shape The Future put the spotlight on the Team Oakley athletes that have proven to be some of the driving forces that will shape the future of football and shape the future of the world we live in.”

The NFL returned to game play earlier this month with a shortened schedule and empty stadiums. Advertisers are spending big on television this season in hopes that viewers will tune in. The season also returns with a new round of voices speaking up about the Black Lives Matter movement. The NFL, who once banned Colin Kaepernick from taking a knee during the National Anthem, is now supporting players and allowing messages of social justice to be painted in the end zone. Patrick Mahomes II and Lamar Jackson were among those speaking up for the cause.

“We Shape the Future highlights Team Oakley’s mission towards hard work, dedication and victory, despite the constant judgement about their impact,” adds Goss. “Through their hard work and determination, these players, from various teams, are working together to shape the future.”

As part of the partnership, Oakley has pledged to donate to Patrick Mahomes’ new foundation, “15 and the Mahomies.” Founded by the MVP quarterback of the Kansas City Chiefs last year, the organization is focused on the health and wellness of children through equal opportunity.

For 2020, Oakley has extended its team partnerships from three to six teams: The Cowboys, The Ravens and The Packers will join The Chargers, The Chiefs, and The Giants as Oakley teams. “All teams bring us different value through their brand equity, passionate fanbase, content and more,” says Goss. “Generally speaking, we try to market with a player and a team to best tell the Oakley story so you will see alignment between our athlete and team rosters.”

These partnerships are aimed at helping the brand build awareness of its new collection of shields and sunglasses. The line is an Officially Licensed NFL Eyewear and is available for all 32 teams with the official team logos and team color accents. NFL team microbags, leashes and cases are also available.

To promote these products and their team partners, Oakley has planned a range of athlete and team activations that will run throughout the fall. This year, like many other brands, Oakley has shifted to a digital-first storytelling approach – with rich content running across social, both on their own and partner channels.

“Oakley’s overall marketing strategy is to continue to support our community of athletes and their love of sport,” says Goss. “We accomplish this through product innovation, content that celebrates Team Oakley athletes and campaigns that support the global community’s passion for sport. We Shape The Future underscores all of those points and highlights Oakley as a brand that is always looking towards what’s next.”

Additionally, Oakley will have a new place on the field this year. Players and coaches will be wearing The Oakley Mouth Shield, a specially designed product created by Oakley with input from doctors and engineers from the NFL and NFL Players Association, aimed at preventing the spread of the coronavirus.

“During a time of so much uncertainty, we need to all act as one team, and that’s what our marketing has reflected,” says Goss. “We shifted our 2020 Global Marketing Campaign, One Love, to bring the world together through a shared love of sport, and then we followed that up with our NFL campaign that speaks to igniting change, on and off the field. We hope to spread positivity and shed light on a universal passion – sport.”