The year was 2013. I was minding my own business, rocking my 3-month-old to sleep after her midday bottle when my smartphone lit up. It was my first supervisor, a partner at a massive agency. He was embedded at a company that used to be a client, and that I had incredible respect for. Ultimately, he asked me to come work for that company. 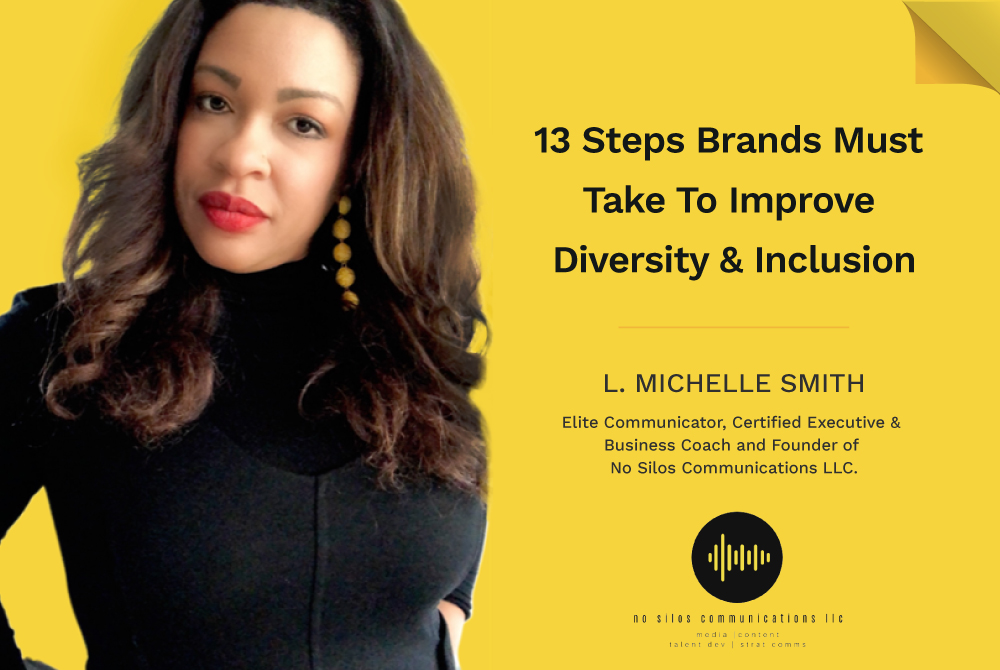 I was minding my own business, rocking my 3-month-old to sleep after her midday bottle when my smartphone lit up.

It was my first supervisor, a partner at a massive agency. He was embedded at a company that used to be a client, and that I had incredible respect for. Ultimately, he asked me to come work for that company.

I wasn’t in the market for a position.

I’d worked for two decades, about half that time running a small agency that had represented some pretty recognizable brands. I’d just left a global agency as a Senior Vice President. I wanted this time to be a mother to my new little one, so I’d decided that consulting here and there was the most that I would do, if anything.

But this call came from a person whom I cherished, and he was working for two more people that I cherished and respected, including the SVP of corporate communications who had been my client twice over at two different agencies.

All three of them are white, but that didn’t matter one bit.

Yet, I took a real pause. They were asking me to do something that at least twice in my career I had turned down. I had vowed to myself never to take a diversity & inclusion or multicultural marketing role ever in my career.

This story may surprise you, because many of you know me as “that woman with the strawberry blonde curly afro that used to rock the stage for AT&T about diversity & inclusion.”

You’re right. About eight times between 2017 and 2018, Brand Innovators’ Co-Founder Marc Sternberg passed me the mic in various cities, at the headquarters of major brands and agencies to share what would become my signature message concerning inclusion marketing.

The obvious plot twist is that I took the position, but why did I do it if I was so vehemently opposed to roles like it?  You may have even noted that I took a lesser position than I’d had in the past.  I made VP before I was 30, and here I was more than a decade later doing something I said I’d never do.

Let’s start with why I made that vow to begin with.

As I remember telling the executive partner at the global agency where I cut my teeth, far less eloquently than I’d deliver my keynotes nearly 20 years later.

“I want to do strategic communications for white people too.”

I never will forget the look on my boss’, boss’ face when I said that. I warned you that it wasn’t eloquent.

I went on to say that they had hired me to do technology PR, and I didn’t want anyone to forget that I had talents in strategic communications that reached far beyond diversity & inclusion because

1) It’s always the program with the least budget and first to get cut.

2) I didn’t want to be pigeon holed—not this early in my career.

Within moments, she composed herself, smiled and said, “ I totally get it.”

She’d asked me to take over an entire practice after only two years at the agency. Most would have jumped at the opportunity, and it was a compliment to my abilities. I told her that I would support, but I didn’t want to stop doing the other important work that I was doing for Fortune 500 brands on their roster.

Beyond the fact that the three people inside this Fortune 10 were some of the same people from that agency where I put my stake in the ground against a multicultural role, something in the cultural context was about to shift.

You see, when I ran my own agency, I did work for some major beauty brands. One in particular was looking at how to address a trend that the 2000 Census uncovered: America was browning.

The most-checked box that year was the “other” box, despite what was publicized.  We’d been told that the Hispanic population was the fastest-growing community. That wasn’t incorrect. It was just a box that was recognized as a “race.”  The “other” box was not.

So for years since then, the “other” box would still be checked most, but everyone seemed to ignore it.

This beauty company was literally developing products based on the changing curl patterns in people’s hair. Stylists were reporting fewer blondes in their chairs for service and more people looking to straighten or tame their curls.

That insight stuck with me, and I also knew that by 2017 we would begin to see predictions that people of color would become the majority.

Suddenly, there was a real business case for me to dive into the multicultural space, because in only a few years, the so-called “general market” team would need counsel from someone like me.

Additionally, after 20 years of building a solid reputation in the industry, it would be pretty hard to be pigeon holed.   To do this work for a company that I believed really walked the talk was also a golden opportunity.  After all, I’d have to believe that in order to put my name or face on the work.

It would be the perfect time to take on one of these roles and bring my classic marketing approach and award-winning skills to an area that didn’t always get the premium talent…mostly the most passionate talent. Budget limitations dictate everything, even talent decisions.

I did, however proclaim from the start that it would be my first and last diversity gig.

You still may be puzzled why I’d make that statement. I worked at AT&T, did more than what I signed up to do. Created some great waves in the industry. My team won award after award, and now, here I am.

Despite the wonderful, standout work and commitment of companies like AT&T, have you noticed that we, here in the U.S., really are still in the very same place? In fact, some would say we’ve regressed.

I’ve likened D&I and multicultural positions to organic fruit. You’ve all purchased those beautiful bright red strawberries. They are delicious, but we all know what happens if you don’t cook with them or eat them quickly.

They rot. They mold and they’re no good to anyone.

You can quickly tire in these roles because they aren’t just jobs. Many times, you find yourself in hand-to-hand mortal combat because leaders and colleagues are stuck in the old way—that D&I and multicultural efforts really belong over there—in that corner, not taking up space in their world where the “real work is done.”

I’m older and wiser now, and my perspective is clearer with a bit of hindsight on my side. Did you know that 30 years after John Johnson, founder and publisher of Ebony Magazine, finally succeeded in pitching the fact that the black community was a viable segment to which companies could market, and the many diversity & inclusion programs and multicultural marketing efforts since then, no one single company has cracked the code on diversity & inclusion?

Yes, more companies tout it as a value. Yes, more brands are making statements and standing in solidarity with under-represented groups, but how many are actually sustaining a commitment to supplier diversity, creating viable leadership pipelines for diverse talent across the business, building diversity & inclusion into their technology business and operations on an ongoing basis? Are they creating measurable KPIs with the goal to ultimately irradiate the problem?

One reason why companies may not have cracked the code is because the problem isn’t clearly defined. Many are so busy trying to lump every issue into one effort or watered down statement or program that it completely misses the mark.

We have brands that are afraid to say the word black, let alone the word racism.

And yet, there are other key issues that brands overlook when attempting to market and be on the right side of history.

My story underscores them:

1) Building solid, one-to-one relationships so that black people will want to work with you.

2) Understanding that your company’s reputation will drive how black people view you and that will be how they decide they want to work for you.

3) Knowing that it takes the entire company, from the C-Suite down to commit sustaining budget to these programs to really move the needle.

4) Comprehending that your message must be authentic and empathetic. Can you hold up a statement that says you stand in solidarity with black people, when your black employees are unhappy or non-existent?

5) Advocating for your black talent on the various marketing teams.  Don’t allow their ideas to be hijacked.  Allow their voices to be heard and recruit them at every level while creating a space for them that is safe and non-threatening.

6) Challenging racism in your workplace head on.  I’ve seen time and again racism written off as politics, unconscious bias or a personality conflict where white privilege takes precedence over what’s right.

7) Knowing the difference between gender equality and the issues of disenfranchised people.  A white woman is not the answer to your diversity initiatives, so please don’t allow her to take them over.

8) Saying it from your gut and meaning it: until black people are valued on my team, in my workplace in my community, it’s tough to say that all lives matter.

9) Promoting that until black businesses are given a fair shake at doing business with huge conglomerates like your own, are we really supporting small business?

10) Advocating that until black creators are paid and treated equitably as their counterparts are or given credit for actually starting the trends and hashtags that make other people rich, and not approving that influencer marketing program until you’ve done your homework.

12) Being absolutely positive that your brand isn’t co-opting culture and that it really is present in the black community so that you have an authentic message to share.

13) Bringing your D&I or multicultural marketing team out of the shadows and valuing their counsel in your mass marketing efforts.

Today, as a certified executive coach who integrates strategic communications with talent and leadership development, I spend much of my time coaching leaders who fear taking these D&I or multicultural roles in any part of the business because of the implications for their careers. Others are leaders who are experiencing microagressions and their careers have been stalled. They feel they’ve hit the black ceiling. All of them realize that the path to the C-Suite only allows a precious few to pass through. I also spend time with leaders at corporations who want to make an impact for their team members, especially the black and brown ones.

As marketing leaders, you have the power to hold multiple business units accountable to commit to making a real impact on the inside and outside of your companies; so, that the work that you put into the marketplace on these topics not only resonates but is genuine and meaningful.

Now, what will you do at this pivotal moment in time that will have a meaningful impact for your black colleagues, team members, creators, small businesses and friends?