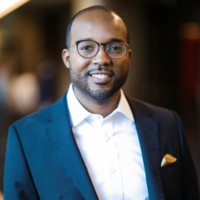 TJ Abrams is the Head of Global Brand Strategy and Performance for Holiday Inn at InterContinental Hotels Group (IHG) in Atlanta, GA. He’s currently accountable for brand growth in 80 countries around the world on a brand that delivers over 25% of total revenue for the IHG portfolio. Over the past 5 years since joining IHG, TJ has worked across the Mainstream portfolio leading IHG’s biggest brand campaigns including the Holiday Inn “We’re There” Masterbrand campaign and priority growth initiatives such as launch of IHG’s newest brands, avid hotels and Atwell Suites. TJ is a standout people leader and company executive, appointed in 2019 to the inaugural executive Diversity & Inclusion Board.

TJ joined IHG from The Coca-Cola Company where he spent 7 years as a brand leader across the Sparkling portfolio in both Global and US roles of increasing responsibility. While at Coca-Cola, he helped relaunch the Coke Zero brand to become the fastest growing, most successful sparkling beverage in the U.S., delivering over $1 billion in sales. He also spearheaded some of the companies most iconic campaigns including Share a Coke, 2014 FIFA World Cup in Brazil and the 2012 London Olympics. He joined Coca-Cola with previous experience working in marketing at Lowe's Home Improvement.

In 2013, TJ was named to Forbes' 30 under 30 list for Marketing and Advertising. He is known as an innovative brand leader and high-performer in every organization he has served over the past 16 years.

Outside of work, TJ dedicates his time to empowering and propelling the lives of youth leaders across the country through some of the most iconic programs in the US. He currently serves on the Board of Trustees for the Ron Clark Academy, Harvard Debate Council Diversity Project, and recently completed a 5-year term as Co-chair for the Coca-Cola Scholars Foundation Alumni Advisory Board.

TJ earned a B.A. in Journalism and Mass Communications from the University of North Carolina, Chapel Hill in 2005 and an M.B.A. with a concentration in Marketing from Duke in 2009. He currently resides in Atlanta with his wife Bianca and their two children.