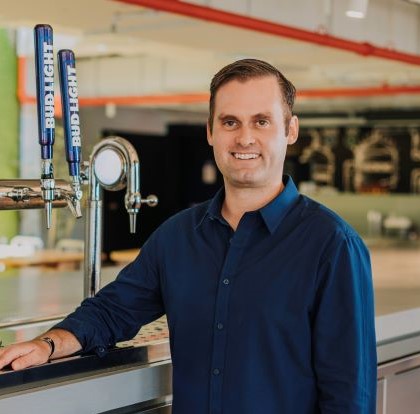 Steve Wolf currently serves as the Vice President of Marketing for Bud Light Extensions at Anheuser-Busch. He is responsible for leading marketing efforts across Bud Light Seltzer, NEXT and the Chelada portfolio.

Steve joined Anheuser-Busch in May 2016 and has held roles leading teams in global brand marketing, field sales, trade marketing, and finance. He previously led Anheuser-Busch’s sales and marketing organization in the State of Colorado. During this time, Steve built the Cutwater Spirits brand into a powerhouse, growing it +350% to become the largest ready-to-drink cocktail brand in the state.

Steve began his career at Anheuser-Busch as the Global Marketing Director of Budweiser Experiential and Entertainment focused on sports, music, and film. He led programs that helped Budweiser generate buzz amongst consumers and shape culture. During his tenure Steve executed global partnerships with some of the world’s largest and most exciting players across Electronic Music including Tomorrowland, Boiler Room and Mixmag. He also produced the critically acclaimed documentary film Kings of Beer that won numerous film festivals and is currently streaming on Amazon Prime Video.

Steve began his career as an Army officer. During his five-year military career, he served in various combat leadership roles across South Korea, Afghanistan, and Iraq. He holds a BSBA from Bucknell University and an MBA from the Kellogg School of Management at Northwestern University. He lives in Denver with his wife, two spirited daughters, and a rambunctious German Shepherd.