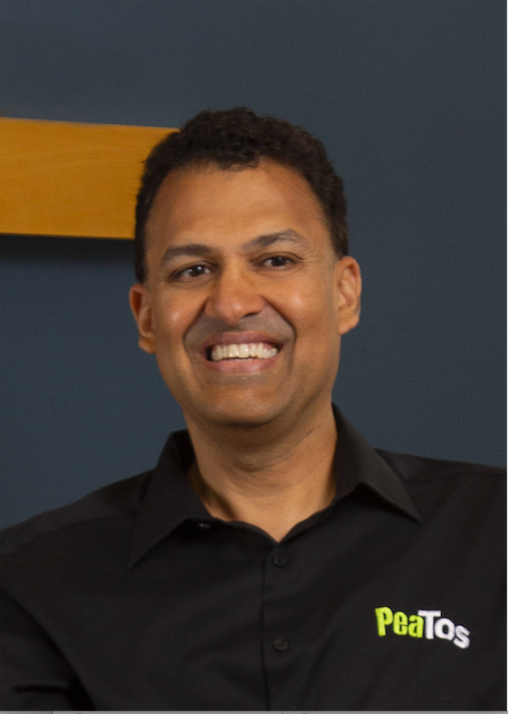 Nick Desai has been the Chairman and CEO of Snack It Forward since 2013. Snack It Forward, a better-for-you snackingcompany with a focus on plant based Snacks, boasts a portfolio of beloved brands including World Peas™ and Sunkist®Snacks.  The World Peas™ mission: to help mainstream America eat better by creating “junk food” tasting snacks with more substance.

In 2018, World Peas™ launched Peatos®, a crunchy puffed snack that is a new twist on an American classic, with 4 grams of plant-based protein and 3 grams of fiber per delicious serving. Peatos®, typically found in the produce section, are currently available atover 4000 stores nationwide including every store under the Kroger banner as well as Vons, Pavilions and Albertson.

In 2016, Desai led the acquisition of World Peas™, a brand focused on premium, better-for-you pulse based (peas, favas, lentils) snacks,available nationally at retailers such as Whole Foods, Target, and Sprouts. Desai spent the next two years leading the formulation of the revolutionary Peatos®snack which includes significant proprietary technology centered around extruding high protein raw materials.

Desai entered the food and consumer space in 2011 by leading the acquisition of Energy Club LLC, a snack food manufacturer based in Los Angeles. Before dedicating his career to the snack industry, Desai’s experience spans an extensive background of over twenty-five years of operations, private equity/investment banking, and law. He started his career as an attorney in the entertainment industry and soon migrated into investment banking and after some time as a Vice President and top dealmaker at KPMG Corporate Finance. He also later became a Managing  Director  at  FocalPoint  Partners.  In  2008,  he  moved  to  the  private-equity  side  of  the  business  as  a Managing Director at Shackleton Equity Partners, a private-equity firm focused on the lower middle market.

Desai has a JD/MBA from Loyola Marymount University, and was a UC Regents Scholar at the University of California, Irvine. He currently lives in Los Angeles with his wife and four children.