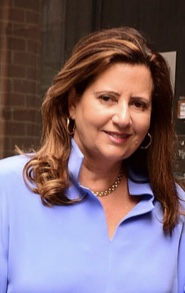 Karen Grinthal joined Food Network in 1997 as Vice President Ad Sales for the Eastern Region. She had been Senior Vice President Ad Sales at Scripps Networks since 1999. In that time, her responsibilities overseeing all ad revenue for Food increased as Food Network grew from a fledgling mid-size network to a top tier brand in the cable marketplace. Additionally, her areas of responsibility included revenue for Cooking Channel as well as convergent revenue for all digital sites in the Food vertical.

Prior to joining Food Network, Grinthal served as Senior Vice President, Marketing and Communications at Turner Broadcasting Sales, Inc., where she was charged with improving the communications process between the ad sales division, clients and advertising agencies.

Grinthal joined Turner in 1988 as Account Executive and rose through the sales ranks to become Senior Vice President Ad Sales for the Entertainment Division.

She is on the board of Young Audiences NY, an organization dedicated to bringing arts education to public schools in NYC.

Grinthal holds a Bachelor of Arts degree from Sarah Lawrence College. She is a member of WICT, AWNY and Women’s Forum NY.