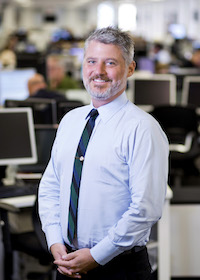 Jesse Angelo is the Publisher and CEO of The New York Post. He is also Chief of Digital Advertising Solutions for parent company News Corp. Jesse joined The Post in 1999 as a reporter and was appointed Metropolitan Editor in 2001 at age 27, overseeing the Post’s news coverage for almost a decade. In 2009, he became Executive Editor, with additional responsibility overseeing The Post’s digital products. In 2011, he founded The Daily, News Corporation’s bold experiment in tablet-native publishing, and served as Editor-in-Chief. In 2017, Jesse created Page Six TV, a daily syndicated entertainment show airing in 98% of the US television market. A native New Yorker, Angelo worked as a reporter for The Sun in London and The Daily Telegraph in Sydney before joining the Post. He graduated magna cum laude from Harvard College.