WWF Shows the World Some Love in New Campaign

This Valentine’s Day, World Wildlife Fund is encouraging people to show a little love for Mother Nature. The conservation not-for-profit is launching a new year-long campaign, “Love it or Lose It,” urging people to declare their love for nature and the environment before it’s too late. 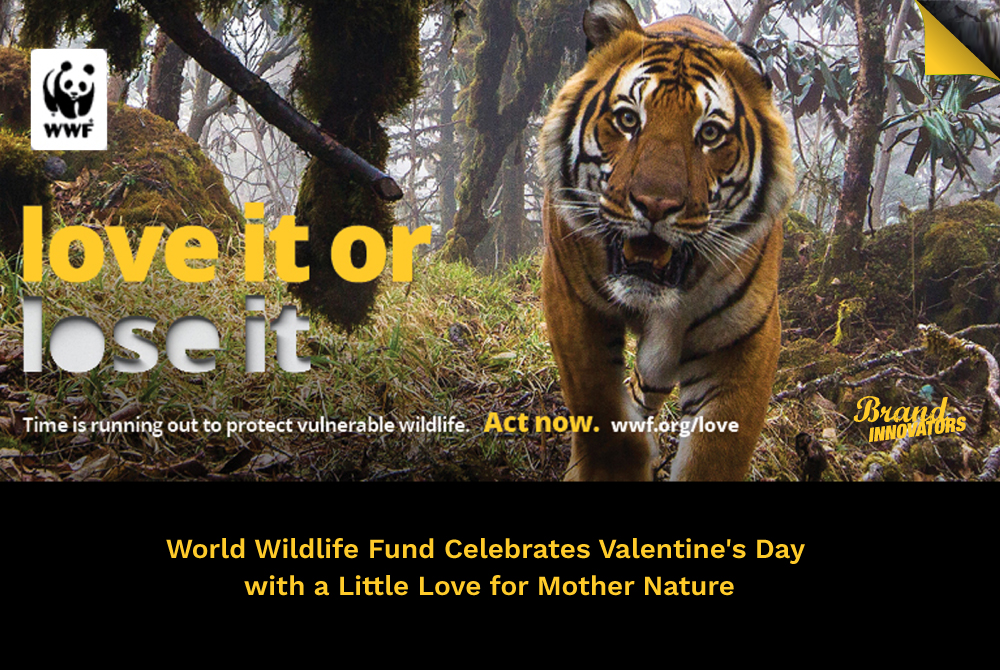 The conservation not-for-profit is launching a new year-long campaign, “Love it or Lose It,” urging people to declare their love for nature and the environment before it’s too late.

The campaign includes television, radio, print, and outdoor public service announcement advertising, virtual events, and an extensive social outreach effort. On Valentine’s Day, the brand will host a virtual Race for Love, in which participants can choose nature as their valentine and sign up to run a 5K, 10K, or half marathon with people from across the country via the Charge Running app.  A social media activation across Instagram, YouTube, Twitter, and Facebook, will offer key moments throughout the year to inspire conversation about nature’s importance using the hashtag #WhyILoveNature.

Television advertising takes a two-pronged approach. The lead spot in the campaign tells the cyclical story of a kingfisher bird and its role in a fragile ecosystem. Additional PSAs in the campaign feature a rendition of Elvis Presley’s “Love Me Tender,” performed by singer-songwriter K.S. Rhoads, played as a soundtrack to images of people, animals, and the wonder of nature.

“When we talk about loving nature, it [is usually] about protecting what sustains us,” Terry Macko, chief marketing officer of WWF in the U.S., told Brand Innovators. “But when you truly love something, you want to go beyond protecting it. You want to do everything you can not to lose it.”

The emotional message is a shift in tone not just for WWF but for environmental protection groups in general, Macko said. The intention is to talk less about the work the organization does and instead make an emotional appeal to what’s at stake.

“Everyone has moved to saying the same thing, and it’s all important work,” Macko says. “But we can’t just talk about it. We have to show our love for it, and that takes commitment.”

In addition to the PSAs, WWF has created a list of nine “magnificent places on our planet” that could be irreparably harmed unless people show enough love and commitment to protect them. Among the areas are the Amazon and Arctic, as well as the Eastern Himalayas and the Northern Great Plains of North America. The showcase of these nine areas is “how we’re grounding our campaign in the work we do,” Macko said.

After a year of general hardship for many, Macko expects the message of loving and caring to have particular resonance in 2021. “This feels like the right moment. With a new administration and a vaccine, the nation seems to be feeling more optimistic,” he said. “This felt like the right time to talk about love.”