At a recent Brand Innovators livecast on Women in QSR Marketing, leaders from Del Taco, MOD Pizza, Papa Murphy’s and Focus Brands Restaurants shared insights about how more doors are opening and what this means for the industry. 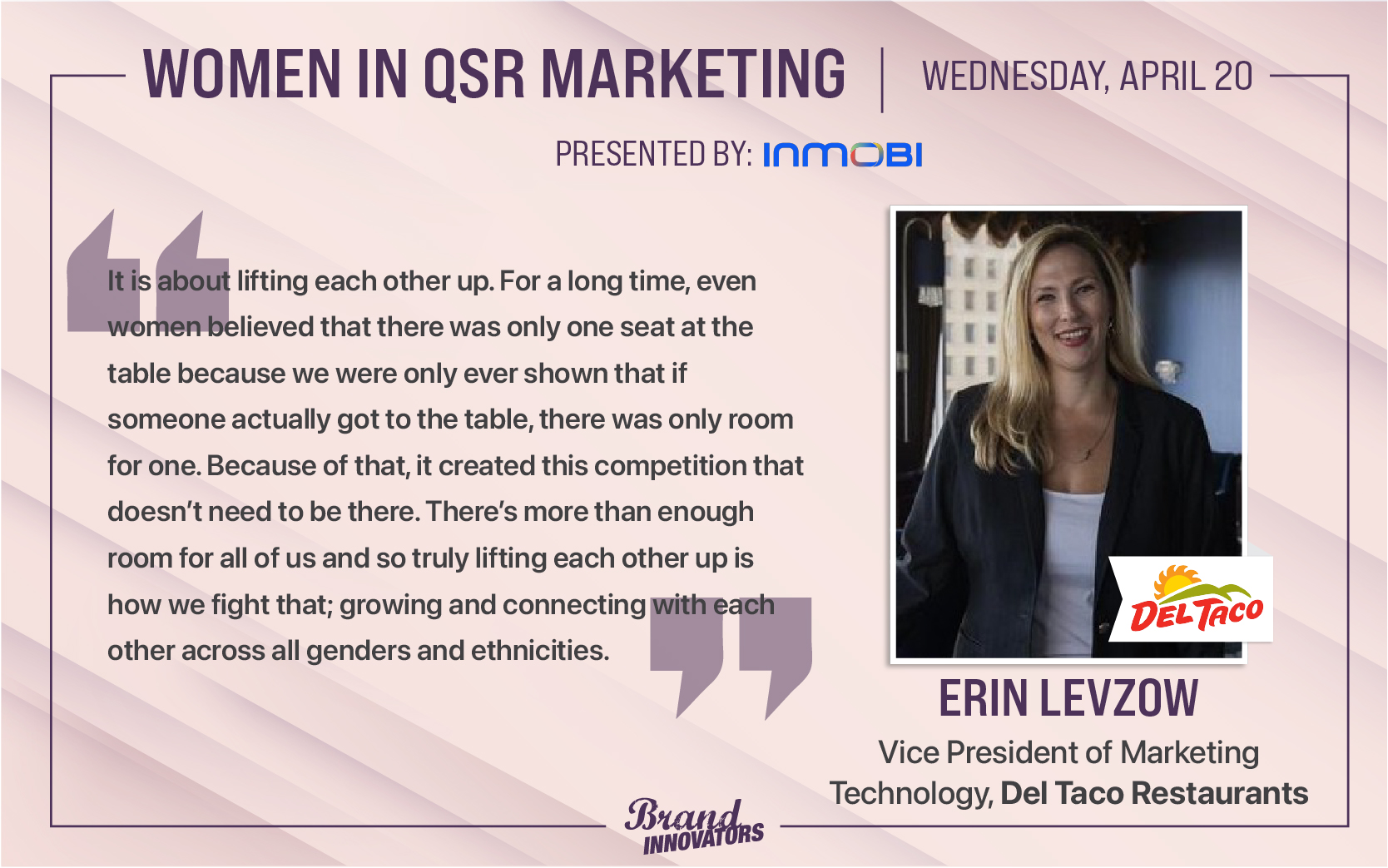 Women are making strides in the QSR business, with female leadership on the rise in the category. This movement is good for the industry overall, as companies with more than 30% of women on their executive teams are more likely to outperform those with between 10 and 30% women, according to The Castle Project.

At a recent Brand Innovators livecast on Women in QSR Marketing, leaders from Del Taco, MOD Pizza, Papa Murphy’s and Focus Brands Restaurants shared insights about how more doors are opening and what this means for the industry.

“It is about lifting each other up. For a long time, even women believed that there was only one seat at the table because we were only ever shown that if someone actually got to the table, there was only room for one,” said Erin Levzow, vice president of marketing technology at Del Taco Restaurants. “Because of that, it created this competition that doesn’t need to be there. There’s more than enough room for all of us and so truly lifting each other up is how we fight that; growing and connecting with each other across all genders and ethnicities.”

Purpose and values are leading forces at MOD Pizza, which has helped drive a more diverse hiring process.

‍
“MOD’s whole purpose is people and we use our food as a platform for supporting people. What’s really at the heart of MOD’s brand is this idea of ‘all pizzas welcome’,” said Mita Padhi, vice president of brand marketing at MOD Pizza. “When you translate that to what that truly means, it’s belonging and belonging is at the heart of MOD. The reason that’s the case is because when we look at hiring, whether that’s in our stores or in our main office, we look to bring in people who have faced barriers to employment so a lot of people who wouldn’t have been given a chance because of their background. That could be anything from education to disabilities to social injustice to just not having had a traditional path, MOD doesn’t see that as a barrier.”

Tracey Ayres, vice president at Papa Murphy's has found that she has been able to succeed by following her passions.

I have never viewed challenges in my career as being specifically related to being female. Identifying your passions and finding a way to get your foot in the door is a challenge that’s relatable to both men and women, especially early in your career. I honestly don’t think from a professional lens that my work has been viewed differently because I was a woman, however I do think that there are some natural tendencies for assumptions to be made. Thinking that women aren’t interested in sports, or don’t want to go on golf outings - things like that are unintended exclusions not meant to be purposeful but I find those to be ways to surprise and delight.

Danielle Parra, SVP/CMO, Focus Brands Restaurants, said that her knowledge of big data early on has helped forge the path for her career.

“I feel absolutely blessed, and it’s a combination of putting in some thought into the future and finding the right opportunity,” said Parra. “I started off my career in that technology space, big data before it was cool, and quite frankly before marketers were seeking out those types of data and technology backgrounds. I was the outlier. It was a pivotal moment for me, it was a personal decision because it intrigued me in the technology space. The connections I made both with clients and working in consulting for seven years, that started the trajectory of my career.”