As marketers, we can learn a lot from bees. Their “brand” has been around for over a hundred million years (and if we don’t screw things up, they’ll be around for a hundred million more). One key to bees’ survival is their “waggle dance,” which signals the location of the most reliable food source to the rest of the hive. Interestingly, a significant portion of the hive completely ignores this information and goes out in search of new food sources that are farther away, often coming back empty-handed.

As marketers, we can learn a lot from bees. Their “brand” has been around for over a hundred million years (and if we don’t screw things up, they’ll be around for a hundred million more). One key to bees’ survival is their “waggle dance,” which signals the location of the most reliable food source to the rest of the hive. Interestingly, a significant portion of the hive completely ignores this information and goes out in search of new food sources that are farther away, often coming back empty-handed. 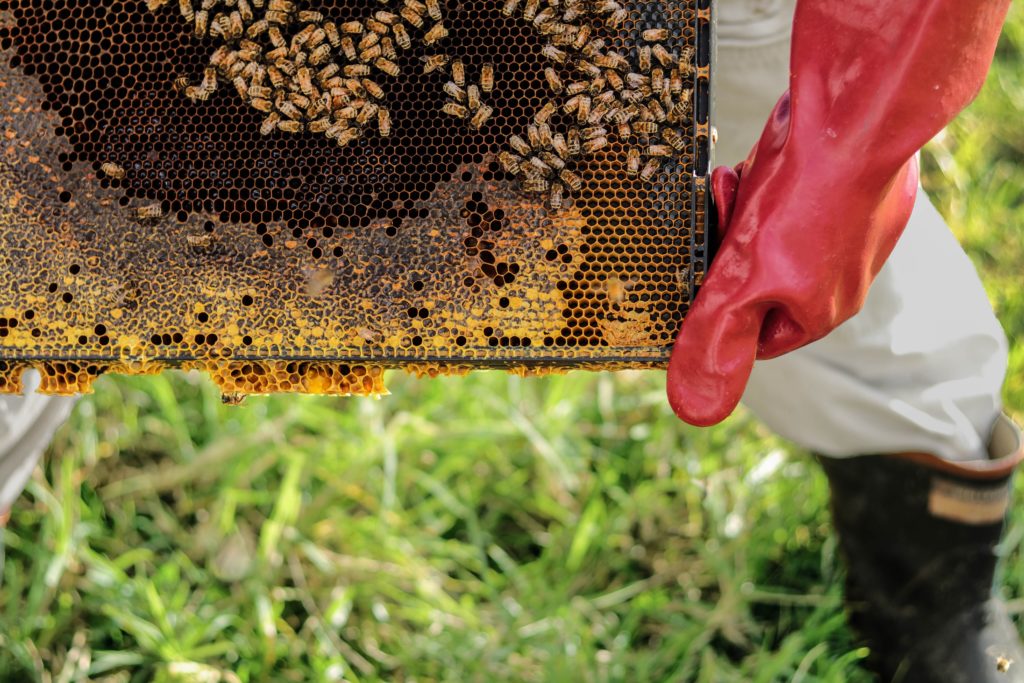 This rogue bee behavior would likely perplex any management consultant. After all, wouldn’t it be far more efficient to always go to the known food source, thereby guaranteeing ROI?

The answer is yes, it would… but only in the short term. Eventually, the bees would fully consume the known food source and, without any knowledge of new food sources, the entire hive would ultimately starve to death. It is because bees do not maximize short-term efficiency that they have been able to scale as a species for so many millions of years.

Mother Nature might be a better teacher of brand growth than McKinsey.

At New Balance, it’s no secret that we want to be a top-3 global athletic brand. Like many companies focused on growth in recent years, we’ve evolved into a “data-driven, digital-first” organization. However, a hidden danger that comes with digital data is that it’s easy to confuse measuring what matters with thinking something matters just because you can measure it. We began prioritizing easily trackable metrics like short-term ROI and, although we enjoyed a period of efficient short-term sales, we soon found that our brand wasn’t growing at the rate we had expected. By heavily focusing on remarketing to known consumers, we weren’t filling our funnel with enough new consumers to grow.

We became a hive with no rogue bees.

To get our brand back on track as we enter 2020, we are pursuing five key opportunities that prioritize effectiveness over efficiency:

1)      Moving from an efficient to an effective comms split

Our comms funnel was upside down. In most countries around the world, we were almost exclusively focusing on lower-funnel sales activation to the detriment of upper-funnel brand building. Marketing science tells us that the optimal split between brand building and sales activation is 60% brand/40% sales (Binet, Les; Peter Field: The Long and the Short of It).  This split allows a brand to have its cake and eat it too, building up long-term equity while also driving near-term sales.

2)      Moving from an efficient to an effective content mix

With a renewed focus on two points in the funnel–brand building (60%) and sales activation (40%)–we want to make sure we have the content to pay this off. After mapping our assets out across a spectrum from pure sales activation to pure brand-building content (Figure 1), we found that the vast majority fell somewhere in the middle.  Although this “mid-funnel” content was efficient for us to produce as we asked a single asset to do two jobs, it was far less effective than had we separately created a dedicated emotional brand message and a dedicated rational sales message.

As we enter 2020, we are creating separate pieces of content to build our brand and to sell our products. [2]

3)      Moving from an efficient to an effective media mix

Now that we are prioritizing brand building with the right content, we want to make sure we have the media mix to support this. We know that brand growth is driven by emotion and reach. The vehicle that does this best (and by a wide margin) is television (Figure 2; Figure 3).

It’s no accident that the top two brands in our category–Nike and Adidas–spend a significant amount in television every year. Brands get big and stay big on the back of broad-reaching vehicles.

Up until very recently, we did not include TV as part of our media mix. [3] As we enter 2020, we will be investing more heavily in television as a top global athletic brand should.

4)      Moving from an efficient to an effective digital video strategy

Sticking with the sight, sound, and motion theme, our digital video strategy exclusively focused on hyper-efficient platforms like Instagram and Facebook. For a time, we had been patting ourselves on the back because we were achieving a cost-per-view of less than a penny. But when we started to kick the tires on these platform views, we found that most of them were less than two seconds, and they were watched with the sound turned off. [4] Sure, the views were efficient, but how effective were they?

As we enter 2020, we will be reallocating our digital video investment into more attentive video platforms like YouTube and Hulu where people are watching for far longer and are watching with the sound on.

5)      Moving from an efficient to an effective social strategy

Lastly, our social strategy had a lot of room for improvement. We had been simply treating our social platforms like free media channels as we posted content organically. However, our over-reliance on efficient organic posting soon led to an average engagement per post that trailed most other brands in our category.

As we enter 2020, we will be boosting more of our posts with paid media so that we can achieve a level of reach and engagement that is more in line with a top global athletic brand.

2020 will be a pivotal year at New Balance as we pursue the above opportunities.  Our brand has been around for over 100 years and we want to ensure it continues to thrive for the next hundred. Finding the right balance between efficiency and effectiveness will be key to our survival.

The challenge will be ignoring our own waggle dance.

[1] Interestingly, 60/40 (actually 62/38) is often called the “Golden Ratio” because of how often it appears in nature. Among other things, this ratio is seen in the spiral patterns of seashells and galaxies. It is evident in the also in the proportions of the human form.  Even the very building block of life – the DNA helix – is 1.6 times long as it is wide. Score another one for Mother Nature.

[2] An analogy for our new content mix can be found in the game of basketball.  The modern NBA has evolved with analytics to learn that there are two most effective shots in basketball – behind the 3-point line and right at the rim. A player who foregoes 3-pointers to shoot mid-range 2-point jump shots may have a more efficient, higher field goal percentage (makes per attempt), but his effective field goal percentage will likely be lower (points per attempt).  In this analogy, upper-funnel content is the 3-pointer and lower-funnel content is the layup. At New Balance, we’re trying to get out of the habit of shooting so many ineffective 15-foot mid-range jumpers.

[3] We even took pride in this omission. After all, we’re digital-first, right? When you pause to consider that some of the best (and biggest) digital-first brands in the world – Facebook, Google, Amazon, Apple, and Netflix – spend the bulk of their ad dollars in television, it’s safe to say that not having television as part of our mix was a miss.

[4] It’s often cited that humans now have a shorter attention span than goldfish, likely due to the prevalence of social media. (https://time.com/3858309/attention-spans-goldfish/).  My counter-argument is that attention is very environment-dependent. Otherwise, the entire movie industry would crumble, and I would not spend entire weekends binging Stranger Things on Netflix.