Twitter has launched a redesign, reflecting the latest iteration of the brand. Derrit DeRouen, Creative Director, Global Brand at Twitter, talks about the inspiration behind the new look. 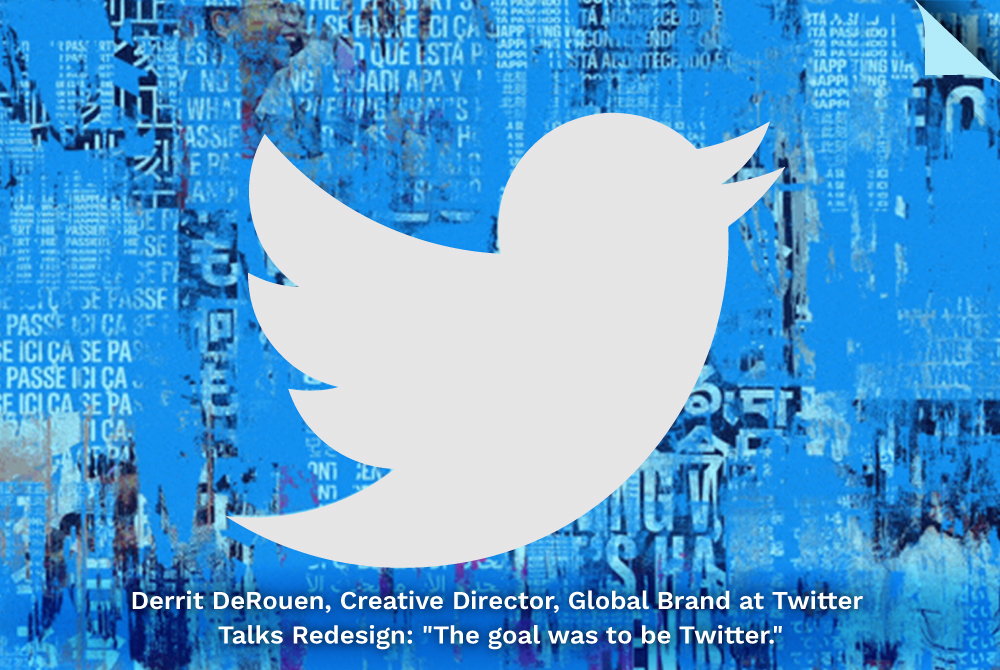 After four years of playing a central role in the global political conversation, Twitter is rebranding with a design that is more reflective of where the platform is at today.

Derrit DeRouen, Creative Director, Global Brand at Twitter, said that the goal was to be Twitter. “That’s a strange thing to say, but what it really means is that the people on Twitter are telling our story for us and we should focus on celebrating them,” he told Brand Innovators. “People show up on Twitter every day and say exactly what’s on their mind and express how they feel. It’s funny, it’s messy, it’s weird. You can’t do that on any other platform.”

The move came to update the brand’s look to keep up with the current culture. “Our previous brand wasn’t good at reflecting culture,” said DeRouen. “It didn’t convey the complexity and power of conversation. So we set a unique challenge for ourselves: to build a creative system for an iconic brand that’s intentionally complex and imperfect.”

To guide their thinking, Twitter used the metaphor of street art – a public, communal, expressive, layered and constantly changing canvas, similar to tweets and conversations on Twitter. “We intentionally worked in reverse,” said DeRouen. “To nail the right attitude and emotion we had to develop the visual expression first, then we focused on how to systemize and scale.”

“Tweets now become our core element and we immerse them in vibrant imagery, color, and the randomness and imperfection of the street,” he continued. “Here, wheat paste posters go up then get weathered, torn, or covered and in completely unexpected ways a rich layer of texture builds up. This is the unexpected beauty that matches the ‘real’ emotions and expressions found on Twitter.”

Twitter is a platform based on expression through text, making typography a crucial element to the brand. The company worked with Swiss design firm Grilli Type to create a new font called “Chirp.”

“Since our central theme is to amplify expressive emotion, the three weights of Helvetica Neue in our old system were clearly not going to deliver,” said DeRouen. “We knew early on that we needed to make a shift, ideally to a fully custom family. The challenge, if we can call it that, is that we are focused on developing a holistic brand.”

“From a marketing perspective, we want to improve how we convey emotion and imperfection,” he continued. “Thus, our new typeface prioritizes personality and flex with context, quirky and fun for light subjects and yet straightforward when the tone becomes serious. You see this highlighted in the Display weights of the family. It is also dynamic enough in its weights to give our motion designers the ability to bring it to life with kinetic energy.”

Chirp is currently in phase one and will continue to be refined as Twitter tests the typeface’s technical capabilities.

Twitter is also planning to roll out Chirp in non-Latin alphabets. “Instead of merely mimicking the look and feel of the typeface in other languages, we want to take the central concept behind it and discover how we can convey the same sensibilities to our regional audiences,” DeRouen said.

“Twitter is a place where culture is evolving in real time and our new brand is a reflection of that,” DeRouen continued. “By simply highlighting the real, raw, and unfiltered ways people show up, we inspire others to join in and engage. Reaching out to someone who isn’t on Twitter creates the perfect opportunity for us to share all of the many incredible people, communities, topics, and conversations that exist on the platform. We want to give people a sense of what it’s like to be ringside as culture happens and encourage them to join in.”

“For current users, who already understand this energy, we want to shake them out of the safety of their timelines and excite them about a topic they haven’t engaged in before. In this way, we enrich the discourse, broaden points of view, and encourage the people who already know us to love us loud.”

Internally, the redesign has improved the spirit of the brand. “The feedback we’ve received is that we’re finally expressing our true selves as a company that lives at the epicenter of culture,” DeRouen said. “We now have a robust system that will give us the flexibility to speak in the appropriate tone to all of the communities that we celebrate and amplify. I believe it will continue to move with culture as it shapes the world around us, and I believe that it will give us the voice to truly convey who we are as a company.”