Super Bowl Advertisers Prepping for the Game Within the Game

How did we get here? How did the Super Bowl become advertising’s undisputed shining moment on the annual calendar? How did American culture create this spectacle within a spectacle? Well, it was a long and winding road but the answer in the end is eyeballs. So many eyeballs. And all of them in one place for one moment, locked in on one single event–a near miracle in this age of fragmented audiences and scatter-spray media channels.

How did we get here? How did the Super Bowl become advertising’s undisputed shining moment on the annual calendar? How did American culture create this spectacle within a spectacle? Well, it was a long and winding road but the answer in the end is eyeballs. So many eyeballs. And all of them in one place for one moment, locked in on one single event–a near miracle in this age of fragmented audiences and scatter-spray media channels. 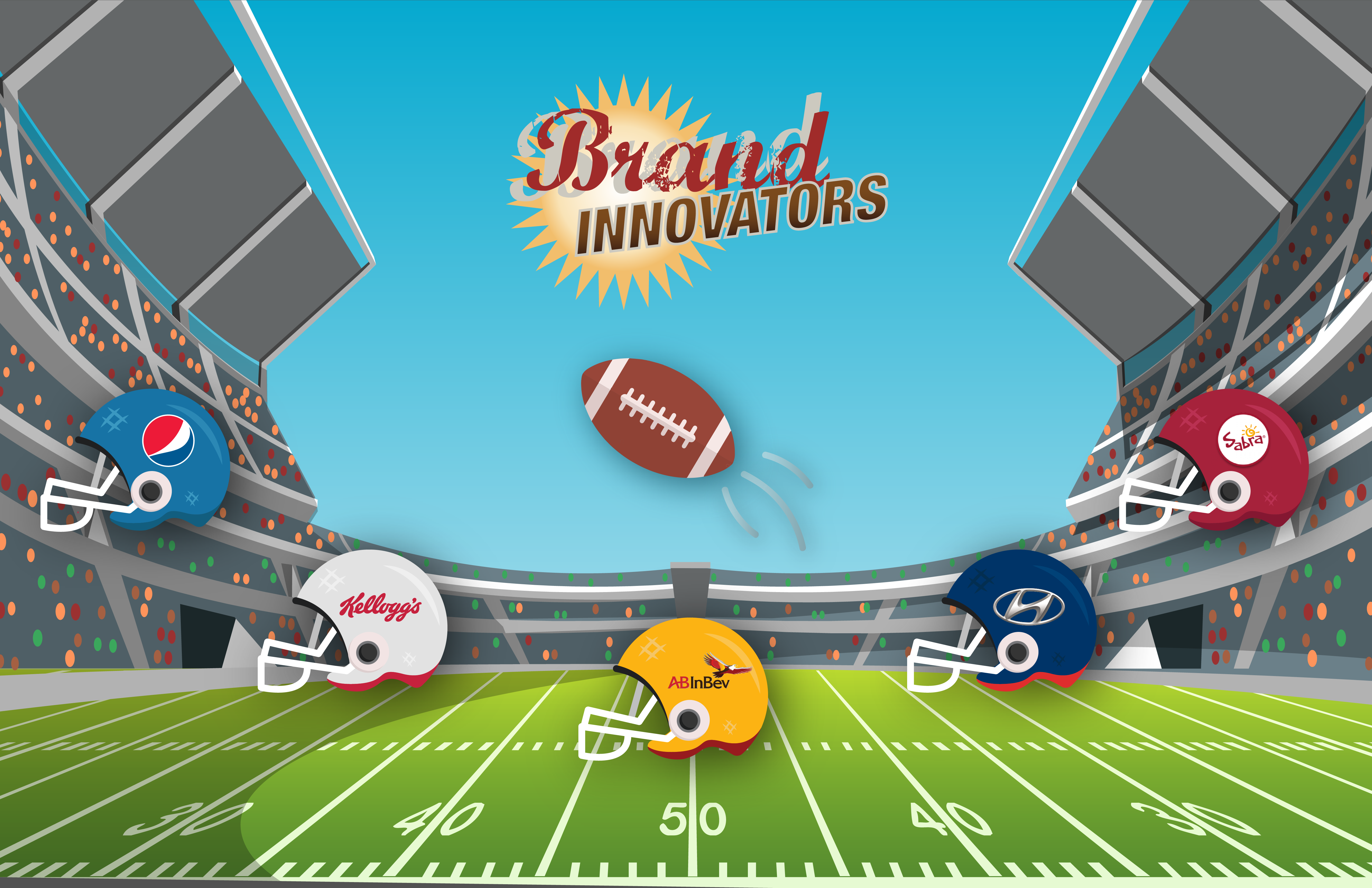 Of course, it wasn’t always like this. The ads during Super Bowl I in 1967 were a mere afterthought. The cost to run a 30-second spot back then: just $37,500. This year? $5.6 million. More than 100 million Americans are likely to watch this year’s game with another 40 million tuning in around the world. (These days, the game is now broadcast in more than 30 languages to 130+ countries.) That’s a lot of eyeballs.

To be fair, the game has always been a hit with viewers and hence advertisers. More than 50 million tuned in for Super Bowl I on Jan. 15, 1967. They were treated to spots from advertisers like Ford, Chrysler, RCA, RJ Reynolds Tobacco, McDonald’s and Budweiser. Most of the ads, of course, were not created specifically for the game but by 1973 that was starting to change. For example, this sexy (and ultimately iconic) Joe Namath-Farrah Fawcett spot for Noxzema.

And then this happened.

With one Ridley Scott-directed masterpiece of provocation, Apple dropped millions of jaws and changed the way we looked at Super Bowl ads forever. The ensuing years have seen a steady increase in budgets, star-power and outlandishness, earning Super Bowl ads as an art form their own place in culture.

As the Brand Innovators team heads to Miami for a couple days of conferencing and partying ahead of Super Bowl LIV, we reached out to some members of our community who are airing ads in The Big Game to get their take on their own ads and the bigger picture of what makes a Super Bowl ad great.

What can you tell us about your Super Bowl ad?

“Hyundai is running a star-studded, Boston-themed spot in the Super Bowl this year. The 60-second comedic ad that will run in the first quarter of the game will feature a cast of well-known Boston celebrities including Chris Evans, John Krasinski, Saturday Night Live alum Rachel Dratch and Red Sox legend David Ortiz. We released a teaser a few weeks ago that finds Rachel Dratch serving as David Ortiz’s dialect coach helping to refine his Boston accent.”

“Avocados From Mexico is proud to return to the Big Game–one of the greatest avocado consumption periods of the year–for our sixth year! This year’s theme takes consumers’ passion for avocados up a whole other notch. Over the past few years, the brand has continued to tell dynamic stories of Avocados From Mexico’s versatility, seasonality, and nutritional benefits, all leading up to this year’s message reinforcing that avocados are Always Worth It.  People will do ANYTHING for Avocados From Mexico, and we will use this platform to tell the story.”

Avocados From Mexico always brings the humor, including in its 2015 Super Bowl ad “The First Draft Ever”

“You’ve heard me say that people are at the center of everything we do, and it takes a village of talented, creative people to bring a Super Bowl spot to life. It all starts with listening to our consumers, and understanding the social and cultural conversations they’re having every day. Then, our challenge is to find a way for our brands to connect authentically to what our consumers care about and are talking about every day, all while staying true to what the brand stands for.”

Are you planning any activations to complement the ad?

“We always ensure that any brand advertising in the game is taking a 360 campaign approach to fully maximize the creative potential of the opportunity. That includes custom digital executions, localized out of home, and on-the-ground experiences in Miami, like the Bud Light Super Bowl Music Fest for example. This year for the first time ever, Anheuser-Busch will produce a live “countdown to Super Bowl Sunday,” a one-hour special on Fox the evening before the Super Bowl, based on the Bud Light Music Fest. This is another way to activate our sponsorship of the game, and to give consumers a new way to interact with our brand as part of their Super Bowl experience.”

Creatively speaking, what do you think separates a great/memorable Super Bowl ad from an OK/forgotten one?

“I think the key to a great Super Bowl ad is simple. Be loved, maybe even be hated, but be anything other than indifferent. They say if you try to stand in the middle of the road you get hit on both sides. Boldly take a creative stand and let the chips fall where they may.”

“We all know that the Super Bowl is a special time of year when consumers are asking for our commercials and are excited to engage with our brands so let’s give them what they want! A great Super Bowl spot might make you laugh out loud, pull at your heartstrings, gasp in delight, throw something at the TV–ultimately, it makes you feel something, it moves you in some way.”

What are you hoping to achieve with this ad and any accompanying digital campaigns and how will you measure effectiveness?

“We have a variety of business and marketing objectives. We want to improve brand consideration and are conducting pre- and post- research to quantify that. We want to drive traffic to our website and generate leads for Hyundai vehicles, particularly the Sonata. For the spot, we want to rank among the top ads in the USA Today Ad Meter, drive YouTube views, secure earned media coverage and generate social media conversation.”

“We look to the Super Bowl for something that is becoming more elusive to marketers these days. The thing that matters most in what we do. Consumer attention. From there we have a robust measurement system to ascertain levels of audience connectedness to the advertising, the success of the messaging and communications and, of course, likeability and potential for action and relationship development with the brand.”

“For our digital campaign, we have extremely ambitious performance goals, which include the delivery of 4.5 BILLION social impressions (75% organic), 55 million digital views of our TV spot and finishing again among the top two digital Super Bowl campaigns in the MERKLE Bowl Report that measures digital excellence in Super Bowl campaigns. We hope to achieve campaign recall, brand linkage and, of course, purchase consideration. Although all these metrics are difficult to measure and attribute to the digital activation, we trust that by strategically crafting our strategies and tactics and selecting the right KPIs that can better deliver toward those goals, we will break through the thick clutter, engage our consumers in relevant ways and make an impact on those metrics that matter.”

What do you hope a big ad buy like this accomplishes that the rest of your marketing ad spend simply can’t?

“The Super Bowl is one of the last remaining appointment television events that reaches roughly 100 million viewers. It’s a stage that can’t be matched in advertising with consumers looking to be entertained by brands. When you add in the digital and social benefits as well, there is nothing else that can effectively reach so many people with brand and product messages.”

“Digital and streaming TV is a huge focus for us because that’s where consumers are spending more and more of their time. That said, TV plays a big part in our media strategy as well because it’s very effective at driving awareness. The Super Bowl offers a unique opportunity to reach a highly engaged, massive audience at a time when they are likely enjoying the game over a beer with friends and family.”

How AARP & Tivity Health are Protecting Seniors from Coronavirus Misinformation