Someday Is Today for OshKosh B’gosh

After more than a year of remote learning, socially distanced classrooms and masks, even kids may be excited at the prospect of returning to a more traditional type of school year this fall. Accordingly, OshKosh B’gosh is taking this opportunity to reintroduce the venerable children’s brand to a new generation of consumers. 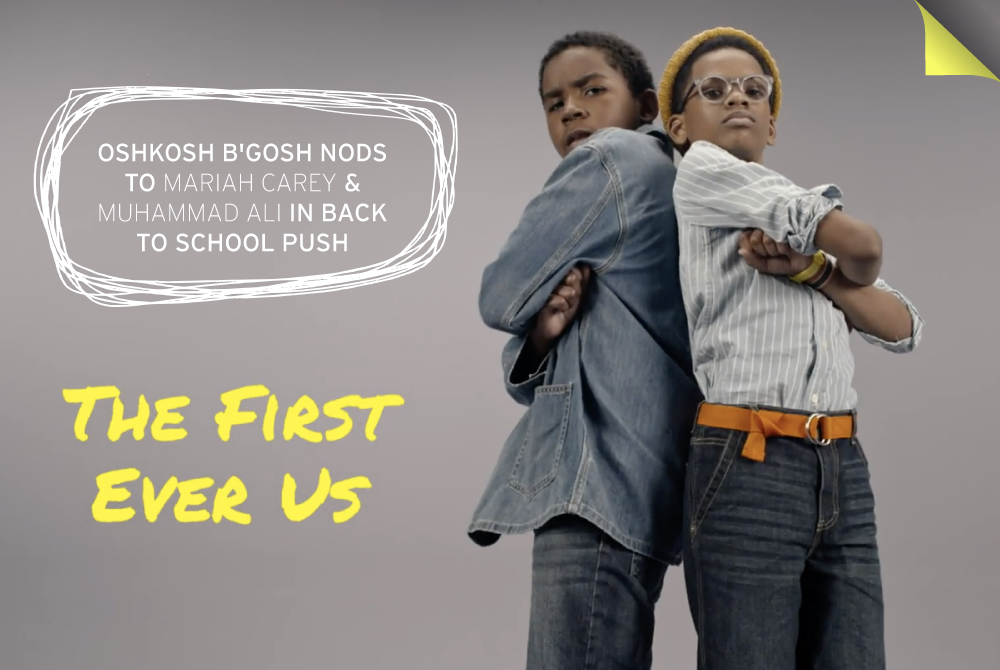 After more than a year of remote learning, socially distanced classrooms and masks, even kids may be excited at the prospect of returning to a more traditional type of school year this fall. Accordingly, OshKosh B’gosh is taking this opportunity to reintroduce the venerable children’s brand to a new generation of consumers.

“After a year like 2020 where we saw so much disruption in kids’ lives, we felt it was important to reignite confidence and excitement as kids head back to school,” said Jeff Jenkins, executive Vice President of Global Marketing at OshKosh B’gosh. “We’ve highlighted stories of the boldest dreamers to celebrate the unstoppable potential of a courageous childhood dream.”

The brand’s new campaign takes a modern, style-forward approach for the 125-year-old brand, and adds a little star-power to the mix. The new campaign, themed “Today is Someday,” depicts notables such as Mariah Cary, Muhammad Ali and the members of Outkast as children.

“We’re aiming to connect with parents who grew up with OshKosh B’gosh by highlighting their icons – while encouraging the bold dreams and aspirations of kids heading back to school this fall,” Jenkins said. “The spots highlight our brand’s timeless, iconic styles that have endured through generations, styled in ways that pay homage to each icon’s unique story and personality.”

The television campaign, from Atlanta-based agency Majority, features monologues from the celebrities as children, encouraging the next generation to dream big. One spot, for instance, features a young boy, identified as “Muhammad Ali, 1950,” saying, “Someday, I’m going to shake up the world. Buy my mom a bigger house. Be bigger than boxing, and bigger than life. And everywhere I go, they’ll chant my name.” The spot ends identifying the brand and the current year, as the young boy strikes Ali’s iconic Sonny Liston knockout pose over a giant teddy bear.

The spots pay homage to the celebrities’ personal childhood experiences, such as a red bicycle, the theft of which inspired Ali to take to the boxing ring. The spot featuring Outkast traces the duo’s history together, starting with their beginnings in Atlanta, and were created in partnership with group members Andre 3000 and Big Boi. Carey’s spot, meanwhile, features the singer’s daughter, Monroe Cannon, portraying her mother at age 10, using emotional information from Carey’s memoir.

“We worked closely with talent on concepting, scripting and execution of the creative, paying homage to their personal childhood experiences,” Jenkins said.

The Today is Someday campaign will break on July 23, running on connected TV, YouTube, and additional digital and social channels. The new style and attitude will also be reflected in the brand’s stores and on its owned media channels.

The campaign is Majority’s first creative work for the brand. Majority was co-founded earlier this year by advertising industry veteran Omid Farhang and multi-hyphenate Shaquille O’Neal, and is one of a number of celebrity-backed advertising agencies that have recently begun making waves in the industry.

“We were struck by the passion, energy and vision Omid Farhang and the Majority team brought to the project – and when we saw ‘Today is Someday,’ we knew it was the right strategic platform to reintroduce OshKosh to a generation of parents who grew up with the brand,” Jenkins said. “The Majority team is tremendously collaborative, bringing the bold ideas, passion and expertise to help push the brand to a new creative space.”