Snickers has kicked off its second consecutive year running the “Hungriest Players” campaign with the NFL, in a move to bring entertainment and connections to consumers during the most unusual season ever. For the campaign, the Mars Wrigley brand once again created a branded, blinged-out necklace that will be passed around weekly to the player that showed the most hunger for the game that week throughout the NFL season. 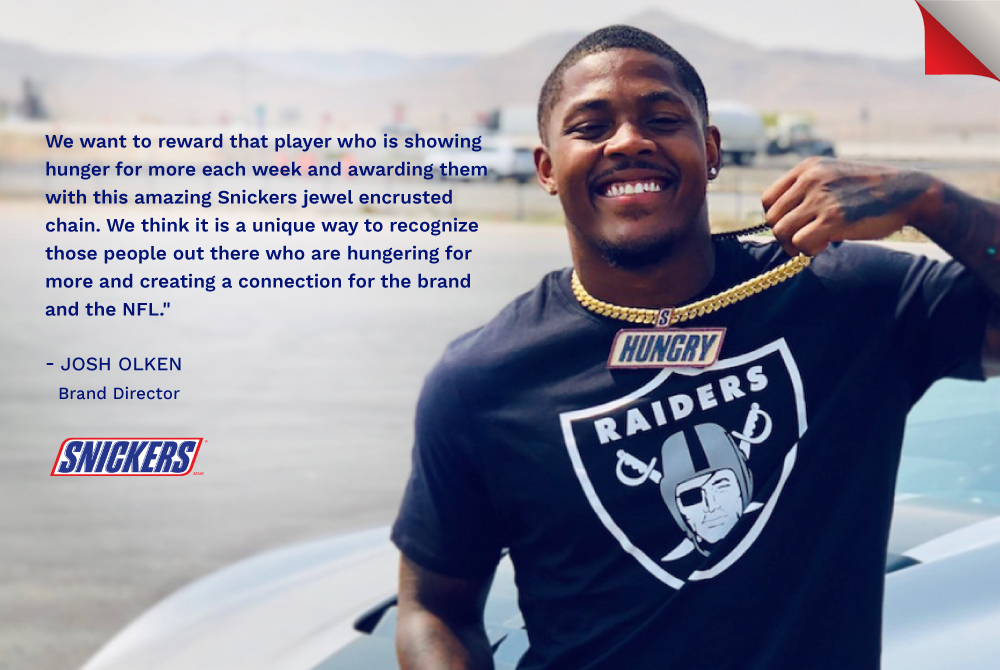 Snickers has kicked off its second consecutive year running the “Hungriest Players” campaign with the NFL, in a move to bring entertainment and connections to consumers during the most unusual season ever.

For the campaign, the Mars Wrigley brand once again created a branded, blinged-out necklace that will be passed around weekly to the player that showed the most hunger for the game that week throughout the NFL season.

“We think it is a unique way to recognize those people out there who are hungering for more and creating connections for the brand and the NFL,” says Josh Olken, brand director at Snickers. “This is our biggest sponsorship and we just think it gives us a really unique way of connecting our brand and our fans with the athletes that they know and love that make this game so much fun.”

This year, of course, things are different for the football season. The season is shorter, the stadiums are empty and players' calls to stand up against racism are finally being heard on the field. Snickers hopes the campaign will help build bridges between players and fans.

“It is a tough year for everybody but I think this program will work this year in part because it is just designed to help connect fans even a little bit closer with their favorite athletes and it is social first,” says Olken. “What worked last year in terms of being able to really showcase these amazing athletes and give fans a little bit of an insider connection with them will only work more so this year. People will be engaging with the NFL this year by watching online and participating socially and we have always seen the opportunity to create a stronger connection for the brands, the fans and these great players.”

The campaign is rich with social conversation potential, as people will likely be talking about the performances of their favorite players on the field. Additionally, the hot player of the week will get their hands on the branded necklace by jeweler Ben Baller, and can show off the 31 carats of 2,374 diamonds that form the word "Hungry" and the iconic "S" from the Snickers brand logo in photos on their social media feed. And at the end of the NFL season, fans will be able to vote on the “Hungriest Player of the Year.”

The effort is targeting fans of both the NFL and of the candy. “With a brand like Snickers and a franchise as big as the NFL, it is all about breadth, and just doing things that touch everybody who love the game and who touch our product,” explains Olken. “That is one of the reasons that we love the NFL sponsorship is because so many people just love and are passionate about this sport. The program, in particular, gives us a chance to touch those who are most passionate, both the fans and the players, and give them an opportunity to connect.”

The timing of the NFL season also corresponds with the beginning of Halloween marketing. While Snickers is not specifically tying the holiday to the NFL campaign, the effort certainly helps the brand get in front of a large audience as people begin to gear up for the October holiday.

“It has always been a great thing for us that the attention of the NFL peaks at the beginning of the season,” explains Olken. “That is a moment when we know that people are starting to think about their fall rituals and Snickers has a role to play during Halloween and in that fall season. So we love that. But at the same time, it is also just about participating in it and fueling people’s love for the game.”

2020 has been a good year for CPG, as consumers are spending on groceries and comfort foods as they continue to stay closer to home. Mars Wrigley has an opportunity to keep this momentum going through the fall season with high visibility through this NFL program, as well as into Halloween. Halloween chocolate and candy sales are already up 17.1%, for the latest four weeks ending September 6 versus the same period in 2019, per the National Confectioners Association.

“It certainly has been an interesting year and one of the things that I think is interesting to watch is the way that people are turning to their comforting favorites in this moment,” says Olken.