New York City is defined as much by its people as it is by its landmarks and attractions. In a new, Big Apple-centric campaign, Pepsi is showcasing some of those people, as well as their talent and passions, throughout the summer. 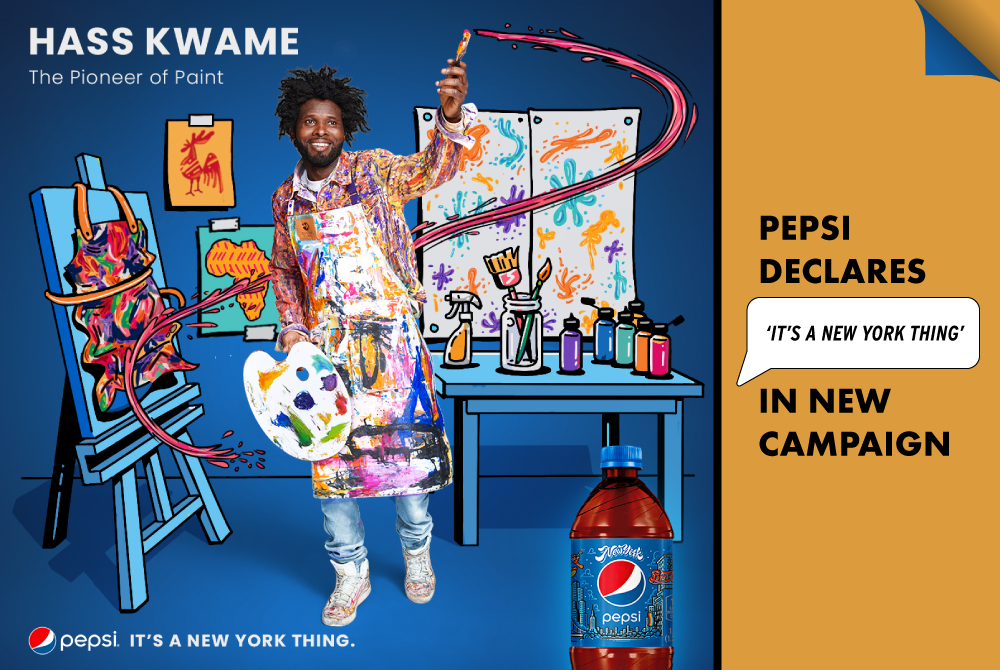 New York City is defined as much by its people as it is by its landmarks and attractions. In a new, Big Apple-centric campaign, Pepsi is showcasing some of those people, as well as their talent and passions, throughout the summer.

The brand’s “It’s a New York Thing” effort, which launched this week, features nine locals (representing all five boroughs) as representatives of the city’s character and spirit. Through out-of-home, digital and social media, the campaign highlights the stories behind the people.

“New York City is our home, and this is an opportunity to recognize the people who bring it to life,” said Justin Faiber, PepsiCo’s director of brand marketing for NYC. “New Yorkers live out loud and live in a way that’s unique to them, and we wanted to celebrate that.”

Among those featured in the campaign are Kwame ‘Hass’ Thimbiano, a hospitality worker who found his artistic passion creating custom-painted aprons for professional chefs, and Tariq Zaid, a Staten Island entrepreneur, who runs a clothing shop and a vegan bodega (called, naturally, Vodega). Pepsi has released videos featuring Thimbiano and Zaid that will be featured on digital channels and in social media. Other subjects include a subway performer from Queens, a Latinx drag queen, actor and singer from Manhattan, a pizza-loving Brooklynite, and a Bronx bodega owner who has achieved TikTok fame through his playful customer service style.

“We did a campaign at the end of last year that focused on bodegas, and we wanted to double-click on that,” Faiber said. “In this campaign, we’re aiming to show a diverse range of people and backgrounds.”

Featuring New Yorkers is a growing tactic for the Pepsi. The brand also launched a campaign in April to introduce Manzanita Sol in New York City. That campaign featured radio personality and “Voice of New York” Angie Martinez visiting a local Jamaican and Caribbean food truck that provided meals for essential workers in the height of the pandemic.

For this latest campaign, Pepsi has given each of the featured New Yorkers $10,000 to ensure they can continue to follow their passions. In addition, the brand is calling on consumers to nominate six more locals to get their own shot at $10,000, for a total of $150,000 to people who give the city its character. Consumers can nominate contenders through social media using the hashtags #PepsiNYCLocal and #Contest and tagging the brand.

“There’s no shortage of people who are passionate in this city,” Faiber said. “It’s something to celebrate and it’s something that needs to be shared.”

In addition, Pepsi has created custom New York City-themed packaging, featuring some of the city’s most recognizable landmarks including the Brooklyn Bridge, Times Square and a classic NYC hot dog vendor.

Though this effort is focused on New York City, the brand is undertaking similar efforts in other areas, including Ohio, Detroit and the southeastern United States, Faiber said. “AS a company, we’ve done a lot of work to keep things nationally great and locally relevant,” he said. “We sell a lot of our products on a one-at-a-time basis, and we are always working to make that personal connection.”