Northwestern Mutual has dropped a new brand campaign called “The Great Realization,” an effort that taps into the cultural zeitgeist of consumers questioning how they work, live and spend their time. 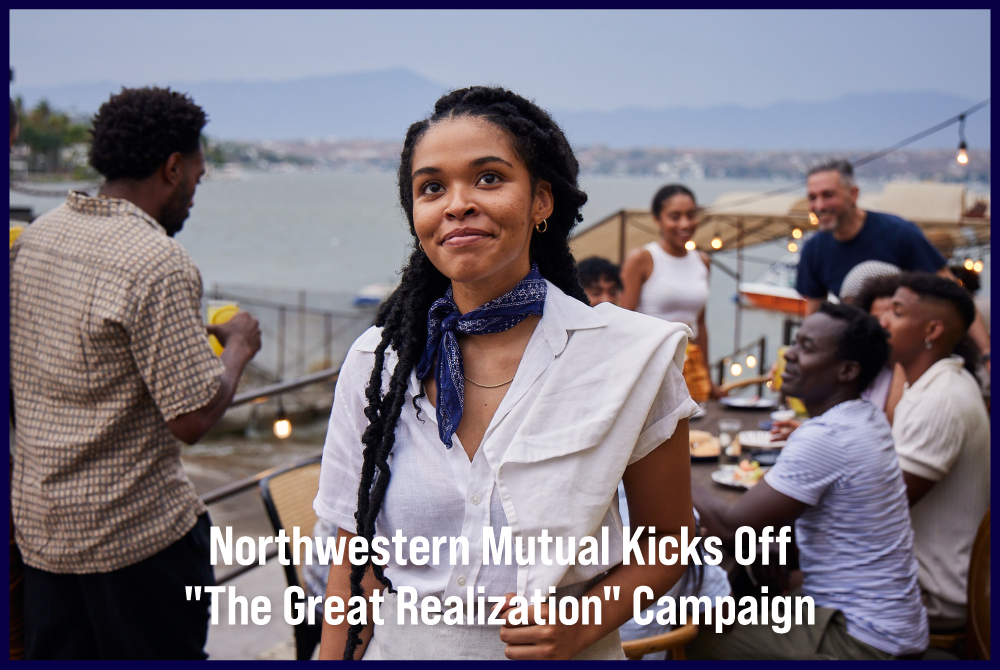 Northwestern Mutual has dropped a new brand campaign called “The Great Realization,” an effort that taps into the cultural zeitgeist of consumers questioning how they work, live and spend their time.

“Americans are experiencing a collective moment of reprioritization, where consumers are questioning everything,” said Whitney Magnuson, senior director social marketing at Northwestern Mutual and member of Brand Innovators Innovation Advisory Council. “The old “work hard and enjoy life later” paradigm is no longer working, simply put, and, as a result, what we’ve observed is that Americans have been planning for someday and they have put off these someday plans long enough. Now, they are ready to turn that someday into today, and, with the support of a strong comprehensive financial plan and trusted financial advisor, they can take actionable steps to turn their Great Realizations into reality.”

"At Northwestern Mutual, our strategy is rooted where culture and insight collide," she continued. "This has been the strategy we have mirrored with our timely Great Realization campaign that is rooted in research and spotlights the need for personalized financial planning to help people live life on their own terms. The Great Realization campaign officially launched on September 8 across TV, digital and social media platforms, paying tribute to this cultural awakening and showcasing personal stories showcasing this collective experience."

The campaign, which debuted during the 2022 NFL season kickoff game, includes a series of videos including “Passion” the story of a young chef that wants to start her own restaurant, “Distant Relatives” the story of a young family that uses a financial plan to take an extended trip to Japan so their son can connect with his heritage and “Kayak,” about a dad who realizes he spends too much time working and decides to buy the customized campervan and take his family on a road trip. The campaign was created with Mirimar.

The campaign is targeting millennials, who the brand found was experiencing a collective moment of reflection and redefining what’s most important to them. “They’re hitting reset and designing the lives they truly want to live,” explained Magnuson. “In fact, according to Northwestern Mutual’s research, 97% of millennials responded that the last two years have shown them the importance of pursuing life goals now rather than waiting for someday.”

The company said this audience is harder to reach using linear TV, so they also created a social campaign.Northwestern Mutual wiped their Instagram feed clean as “a nod to clients taking their own big leaps and instead launched a virtual museum on the channel as an ode to the cultural shift we have identified as ‘The Great Realization,’ that moment where an individual’s priorities come into sharp focus, prompting them to re-architect their lives and pursue what matters most,” said Magnuson.

The “artifacts” featured in the museum include a tiny nightstand used as a makeshift desk by an aspiring entrepreneur and a sourdough bread starter created by someone who dreams of remodeling their kitchen.

“While our in-feed posts highlighted our exhibits, we turned to the story feature to share comedic behind-the-scenes mockumentary style videos of the museum’s creation, real reviews of the museum we received in the comments from early posts, and more,” said Magnuson. “Altogether, the combination of elements – a fresh start, relatable in-feed content, and platform-native video in Stories – led to a huge boost in channel performance for us leading up to the official campaign launch. It was a fresh, unexpected take from a financial brand, and we were really pleased with the enthusiastic response it received.”