It wouldn’t be a Super Bowl without at least a few marketers looking to capitalize on the latest trend. Beyond cryptocurrency markets like Coinbase, FTX, and Crypto.com looking to make a name for themselves on advertising’s biggest stage, other brands simply looked to take advantage of the blockchain at the center of it all by issuing special NFTs. 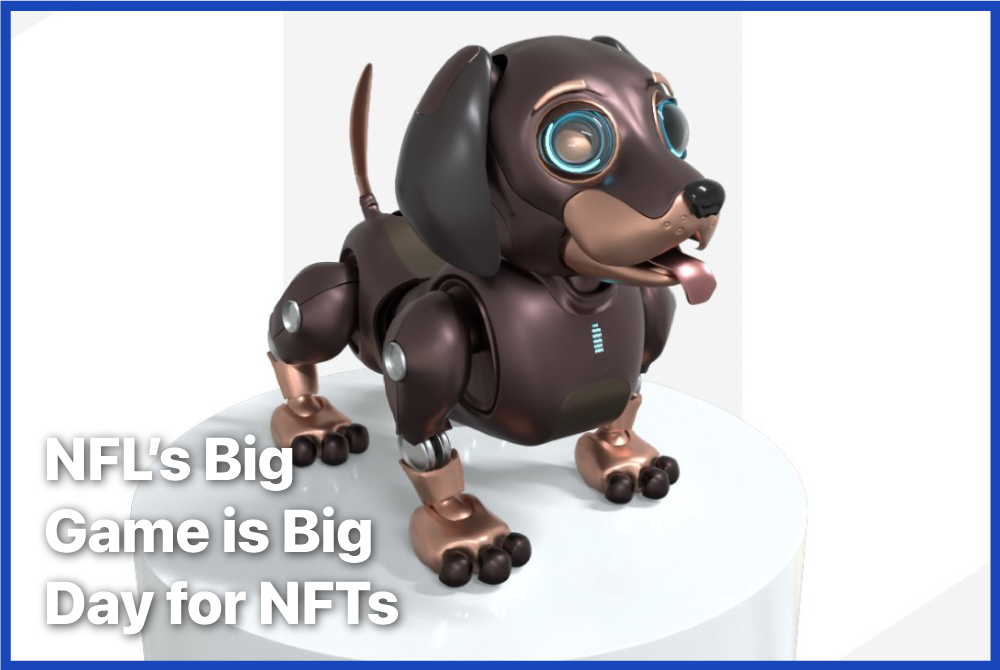 It wouldn’t be a Super Bowl without at least a few marketers looking to capitalize on the latest trend. Beyond cryptocurrency markets like Coinbase, FTX, and Crypto.com looking to make a name for themselves on advertising’s biggest stage, other brands simply looked to take advantage of the blockchain at the center of it all by issuing special NFTs.

Kia jumped on the bandwagon by creating a token of the robot dog from its in-game commercial. Ninety percent of the primary sales will be donated to The Petfinder Foundation to help pets find forever homes. In addition, the blockchain contract calls for a 10 percent royalty to be paid to the charity whenever one of the Robo Dog NFT’s is resold on the secondary market.

“Many of us are aware of the increase in pet adoptions as a result of the pandemic,” said Russell Wager, vice president, marketing, Kia America. “Although tens of thousands of animals have found their forever homes, pet surrenders to shelters are increasing as people return to work and there are many pets whose stories deserve to end as happily as Robo Dog's did in our Super Bowl spot.”

During the game, the brand put six one-of-a-kind digital pieces of art available for a starting bid of $299 (the suggested price of the Robo Dog in the commercial). The auction will be open until February 18 (coinciding with the NBA All-Star weekend), at which time the brand will offer 10,000 separate NFTs for a starting price of $20,22. (The brand had offered fans a chance to acquire pre-sale access to this sale prior to the Super Bowl.)

Kia wasn’t the only brand offering NFTs during the Super Bowl. AB InBev brand Bud Light referenced an NFT it acquired through a partnership with Nouns DAO, a community of Nouns NFT owners in its in-game ad. The spot introduced the zero carb Bud Light Next by depicting people finding their own way to be successful and independent, including one scene in an art gallery that showcased the boxy glasses that appear on Nouns NFTs.

Bud Light had already sold a collection of 12,722 NFTs featuring the imagery, and the company’s sister Budweiser brand was offering people an opportunity to win a Heritage Can NFT if they tweeted about the giveaway.

Outside of the game, other brands found their own way into the trend. Restaurant chain Buffalo Wild Wings sold three “NF-OT”s by New York City street artist JordanNYC inspired by the fifth anniversary of the only Super Bowl to go into overtime play. The NF-OTs were available for auction throughout the game and into Monday, with the first owners receiving free wings from the chain for a year.

In a similar vein, spicy condiment brand Frank’s RedHot released an “edible NFT.” Through the promo fans were encouraged to scan images of their chicken wing bones up until the end of the Super Bowl to amass “bonecoin” (a fake cryptocurrency). The fan who had the most by the end of the game won a Frank’s RedHot NFT and eNFT edible replica.

“Frank's RedHot keeps a pulse on the latest trends, and we are particularly excited about giving fans the opportunity to tap into the NFT space in a saucy and interactive way,” said Alia Kemet, vice president of creative & digital at McCormick, in a release. “We're excited to be a first to offer an edible NFT, or what we're calling an eNFT. What better way to enjoy football than with your own Frank's wing art – both digital and edible.”

And finally, there were the NFTs issued around the game itself. Fans fortunate enough to have tickets to the Super Bowl were issued NFT versions of their tickets as keepsake collectibles, and the Los Angeles Times commemorated the Rams’ victory with its own NFT collection.