McDonald’s is shaking things up by bringing back its limited-edition Szechuan Sauce for the first time in four years, and the fourth time since 1998. 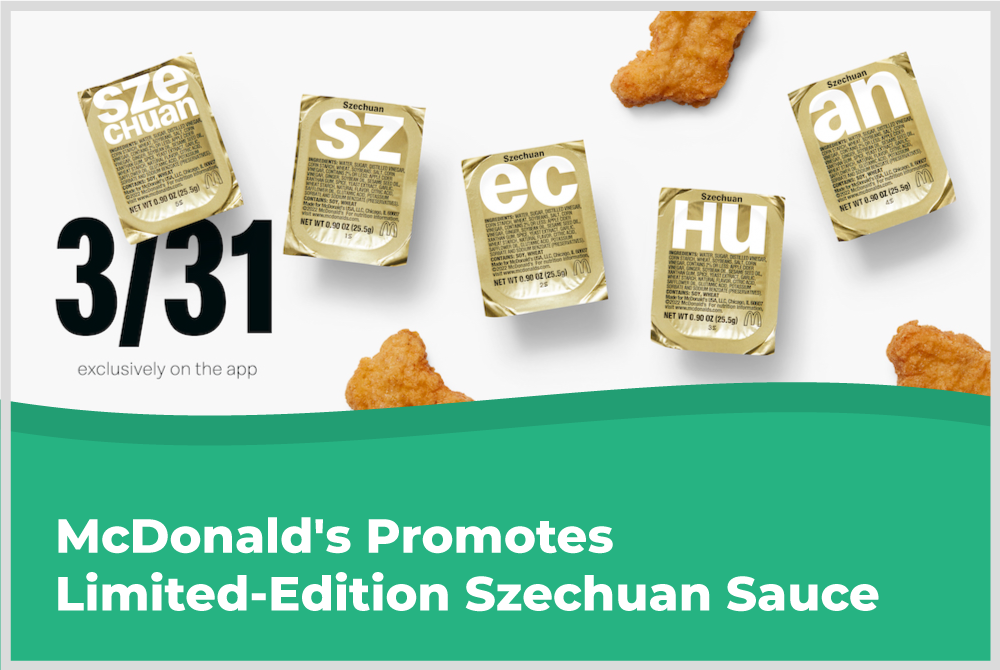 McDonald’s is shaking things up by bringing back its limited-edition Szechuan Sauce for the first time in four years, and the fourth time since 1998.

The iconic sauce which arrives on the menu on March 31st. The packs will be available for free with an order of Chicken McNuggets, or for sale a la carte, with consumers able to purchase five packets on the McDonald’s app.

“Part of the reason Szechuan has built up such a cult following over the past 24 years is because our fans never know if or when it will return,” said Emily Lyons Peet, McDonald’s USA Director of Retail & Affinity Communications. “In 19 years? 1 year? 4 years? The mystery around the sauce is what makes it so beloved, so when we thought about the best strategy for revealing this legendary sauce was returning, we knew it had to lean into the unexpected nature of it.”

“Szechuan Sauce has a passionate fan base who ask us to bring it back every single day... so the demand is huge,” said Guillaume Huin, McDonald’s USA Social Media Director. “For us, it was as simple as recognizing what our fans are telling us on social media and delivering on that. Part of the fascination with Szechuan – like for the McRib - comes from the fact that nobody really knows when or if it’ll ever hit menus again. It’s been four years since we’ve had Szechuan Sauce and no one expected it to come back this year, so we wanted to surprise fans with a drop like they’ve never before seen from McDonald’s. It’s fantastic to be able to empower them by letting them know they are the reason for the unexpected comeback – their love for Szechuan is what made this happen.”

The line includes five different package designs which line up to  spell “Szechuan.”

McDonald’s has been hinting about the drop on social media, sharing a cryptic phone number that consumers could text to find out more. The number also appeared on a Times Square Billboard. The QSR brand officially revealed the news on its Twitter account on March 21st.

“To bring this to life authentically, we took inspiration from big music and fashion launches – building suspense for fans through teases over the course of the weekend then surprising our fans at midnight on Twitter on March 21 with the official news that Szechuan is coming back,” explained Lyons Peet. “This really let so many of our Szechuan super fans discover the news first, and it was exciting to see people wake up and share their excitement around the news.”

McDonald’s also teamed up with text platform Community.com for the first time ever to enable one-to-one text communications.

“I can’t speak enough about how much social media platforms help you connect with your fans,” said Huin. “But what’s the next level of trust, connection and fun – it's something that reaches fans in an even more meaningful way: something as simple as a ‘group chat’. It’s the friend to friend text, that makes you feel like you hold an authentic and unique relation with someone, or in this case, with your favorite brand. Community allows that, and empowers your brand to be the friend, even sometimes confidant, that you want to be as a brand with your fans, taking our social media engagement one step further.”

“Always the innovator in customer activation and engagement, McDonald’s utilized Community’s texting platform and key product features - like localized targeted audience creation, keyword responses and rich media messaging - to directly reach their customers at scale in a new and personal way for the Szechuan Sauce Drop,” said David Ross, SVP Growth, Revenue and Partnerships at Community. “We are incredibly proud of the partnership and results – including one of the highest engagement rates we’ve ever seen on the platform – for this campaign.”