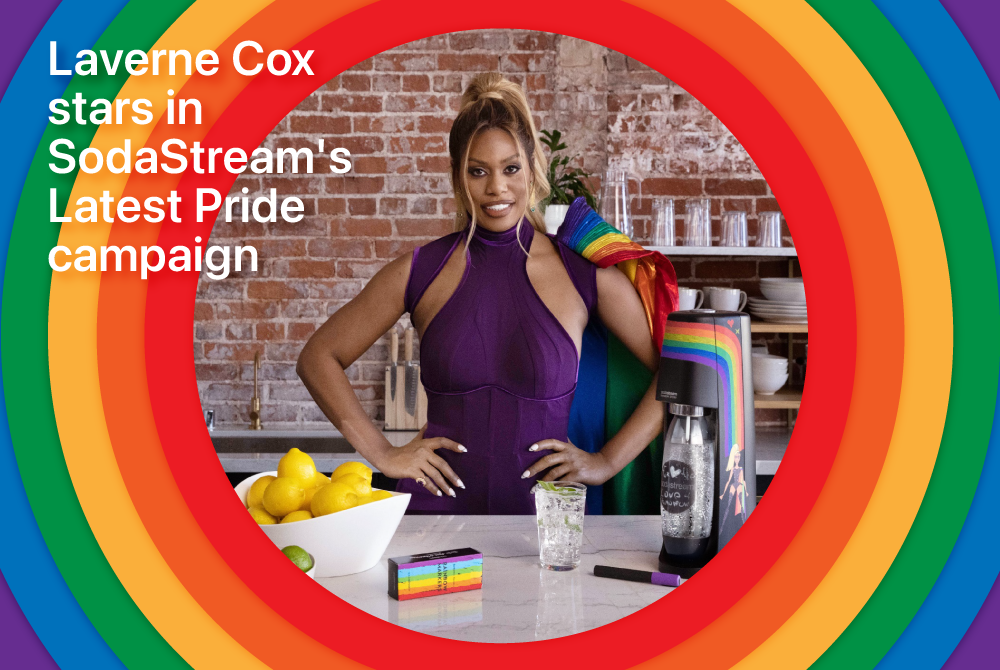 The effort centers on an animated film called, “Rainbow Story,” in which Cox is portrayed as a superhero for the strength and resilience she has illustrated throughout her life from childhood to adulthood where she has become a successful LGBTQ+ community advocate and actress. The spot ends with Cox encouraging viewers to share their own rainbow story.

“Soda Stream is a big supporter of sustainability and a very purposeful brand and this is the fourth year that we are doing a campaign for the LGBTQI community and we like to speak up to defeat inequality and this is really one of our core values,” said Karin Schifter-Maor, SodaStream's Global CMO. “This year we wanted to take it one step further and we have a product that is part of this  360 campaign to make it even more powerful with a platform where we co-create with people.”

The product component is the new Rainbow Story limited edition sparkling water maker kit. The model comes in a matte black design with a special pack of six rainbow markers, encouraging consumers to personalize their machines with their own Pride stories. The product is for sale for $99.99 and a portion of the proceeds will be donated to ILGA World, a global LGBTQI+ NGO that SodaStream is partnering with for the third year in a row.

The campaign dropped globally on June 2nd and will play throughout June through the end of July in some markets where they have peak Pride activities at different times of the summer.

SodaStream has been celebrating Pride with campaigns for the past four years and sees the event as aligned with their values. “Everything we do is to make the world a better place for tomorrow, for both nature and people,” explained Schifter-Maor.

SodaStream is known to work with leading influencers on its campaigns and has featured the likes of Snoop Dogg and Queer Eye’s Jonathan Ness in past efforts.

“We always look for the best match in a speaker who shares our values,” said Schifter-Maor.  “SodaStream has the spirit of trailblazing. We created this category and we chart new territories. We spoke about the environment much before it was a global trend. It is one thing to join a movement and it is another thing to be a trail blazer and we were looking for the presenter that has the same spirit and the same story and Laverne is just a super match to that. Laverne is a pioneer and a trailblazer for her community. She is the first to do so many things and open new doors for her community and she is an activist for the LGBTQI community. She uses her voice in such a great way to make our world a better place.”