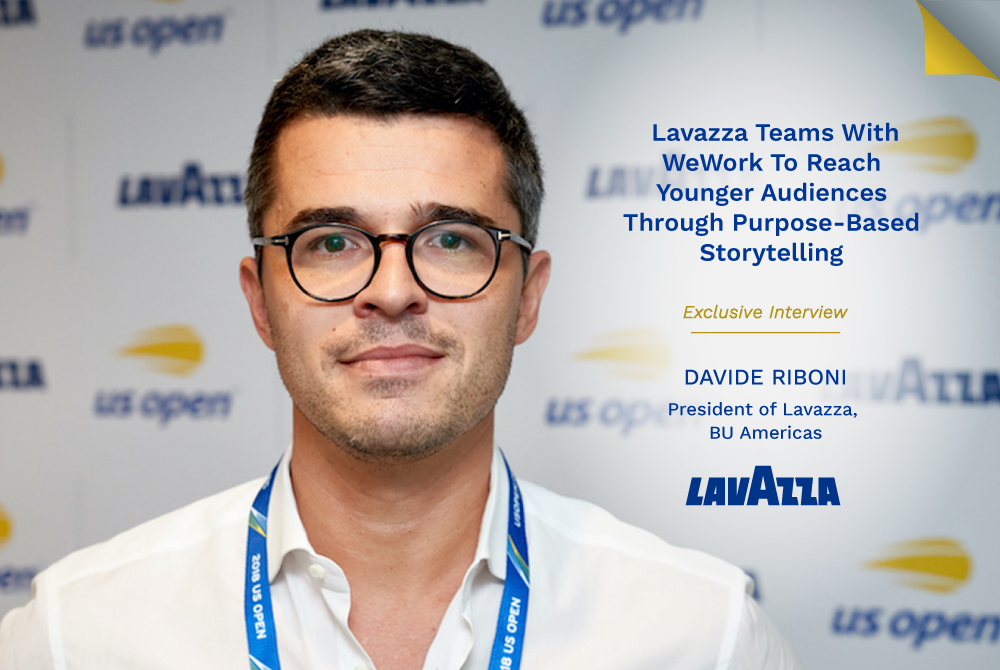 “We wanted to try to expand our presence in North America and the US in particular, so this year we were looking for partners that were the right fit for developing our presence in the country to expose the brand to new consumers and new customers in general,” said Davide Riboni, President of Lavazza  BU Americas. “WeWork is pretty much in the essence of this. Our marketing intent is to increase brand awareness and penetration and have more American consumers to try our coffee.”

Lavazza will bring its presence to more than 300 WeWork locations across the United States and Canada through coffee shops and office coffee corners with Lavazza machines across these locales. As part of their expansion into the US market, Lavazza has identified a few pillars to invest in.

“One of the pillars is specifically to do with sustainability,” Riboni explained. “We launched a sub brand of Lavazza here in North America which is called Tierra, which comes with single blends of organic coffee and sustainably grown coffee and to further establish this new product line, we identified WeWork as one of the most important platforms to achieve that a pillar of our brand strategy and to elevate our brand within the market.”

The Tierra Project is an initiative of the Lavazza Foundation, which has supported the development of economic, cultural and environmental conditions of coffee growing regions around the globe for the last two decades. The brand is hoping to promote this line of coffee with younger consumers by playing up its sustainability efforts and offering more purpose behind its beans.

“This partnership is echoing and giving more attention to the topic in a market that is quickly changing and getting more sensible to these social problems that we all have to face when it comes to agricultural products,” Mr. Riboni said. “Lavazza is not pretending to care, we have been doing this for more than 20 years and we are one of the few founders of the rainforest alliance.”

“It is one of the core values of the company and now it is about finding the method to communicate this properly and establish ourselves as one of the authorities in the brand,” he added.

Tierra coffees are Rainforest Certified and sourced from farms that use more sustainable agricultural practices that protect ecosystems and support workers with fair wages. Sixty-eight percent of US consumers have reported that a company’s social responsibility influences their purchases with the brand, per Forrester, and this is particularly important among millennials and Gen Z. By partnering with WeWork, Lavazza has an opportunity to tell this story to younger audiences. “The idea is to let them try this new coffee, Tierra, and have more consumers exposed to our products and consequently hope that they are going to buy more products to drink at home,” Riboni said.

This could be a challenge during a year when the majority of Americans and Canadians are still working from home and WeWork struggles to adapt to the new normal. To augment this issue, Lavazza will also be promoted across the WeWork digital channels. This way WeWork clients are still exposed to the brand, even if they have not yet returned to the office.

But Riboni is optimistic. It might take a while, but he expects people to return to the office eventually. “Generally speaking in the industry, we all expect a slow comeback but surely people will return,” he said. “Our company has 125 years of history, so we are patient and are looking at the long term and not quarterly results.”

And even as WeWork is struggling with huge vacancies, they are working to fill these recently signing deals with Citi and Merck to lease office space.

Lavazza’s WeWork partnership follows a national television campaign, the company’s first such effort in the United States. “It was more of a social message than just a coffee message,” Riboni said. “It was more about the values of the company.”

Lavazza also recently released a documentary with Amazon Prime about sustainability in coffee, highlighting a project in Columbia, in which they converted farms from coca to coffee. These kinds of storytelling initiatives are a big part of connecting with younger coffee drinkers. If the brand can connect with a younger audience through purpose-based storytelling, the aim is that they can build long term customers in the relatively untapped market.

“Our target customer base is younger generations and people that are more sensible to some of the initiatives that we are implementing, like sustainability,” Riboni explained. “The whole idea is to try to connect a younger consumer into the franchise. Lavazza is an international coffee brand, which has not always been super successful in talking to the younger generation maybe  because of lack of fully exploiting a presence in some channels.”