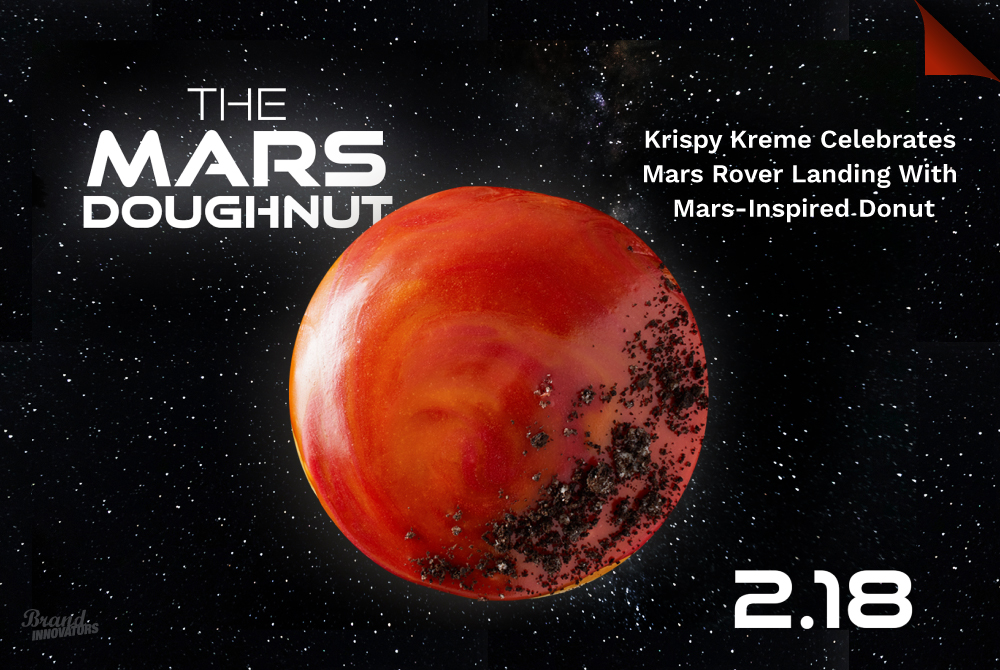 What’s the best way to celebrate the monumental landing of NASA’s Perseverance Rover on Mars? According to Krispy Kreme, it’s with doughnuts!

The brand released a limited-edition Mars Doughnut to honor this week’s scientific achievement. Their campaign generated over one billion media impressions while also making headlines on local and national news broadcasts. The doughnut received over 6,000 pre-orders and sold out swiftly at most in-store locations.

Krispy Kreme has a rich history of honoring celestial events. In the past decade, the brand has released many limited-edition products celebrating moments such as solar eclipses and past Mars rover landings. This tradition has deep roots in the doughnut brand’s history. Fifty years ago, Krispy Kreme served fresh doughnuts to scientists and VIP guests at the launch of Apollo 11.

“Celebrating the achievements of our American scientists is just a part of what we do,” said Dave Skena, Chief Marketing Officer of Krispy Kreme. “Our mission is to share joy and bring joy to others. When you have a nationally unifying moment like this, it’s natural for Krispy Kreme to be a part of it. It’s also a way for us to extend cultural relevance. We love participating in things in a timely manner because we know that we are a product and a brand that people turn to when they want to have fun.”

In a challenging year for restaurants and the food industry, Krispy Kreme has maintained relevance and successfully pivoted their marketing strategies. The brand is cleverly using media channels to connect with consumers. On the day of the rover landing, Krispy Kreme playfully engaged NASA on social media and sent doughnuts to crew members at the Jet Propulsion Laboratory in Pasadena and NASA’s HQ in Washington D.C.

According to Skena, the viral popularity of this campaign speaks to “the power of a good idea.” The limited-edition doughnut was trending on almost every major social network, without any paid media behind the activation. All of the awareness for the product was earned. Local news broadcasts and national media outlets, such as ABC, NBC, and Fox & Friends, picked up the story organically, leading to even more consumer awareness.

“We didn’t invest any ad money behind this, we just wanted to do something cool to celebrate the Mars rover, and there was natural interest in it,” said Skena. “The media channels spread the good word of celebration. It’s really fun when we get to do things like this. I love being a part of a brand that brings joy and makes people happy.”

Carter’s Goes All-In for The Holidays