Riot Games has the kind of committed fanbase most brands can only dream of: fans talk endlessly on platforms like Reddit and they broadcast their gameplay on Twitch for “League of Legends,” the company's first (and best-known) game launched in 2009 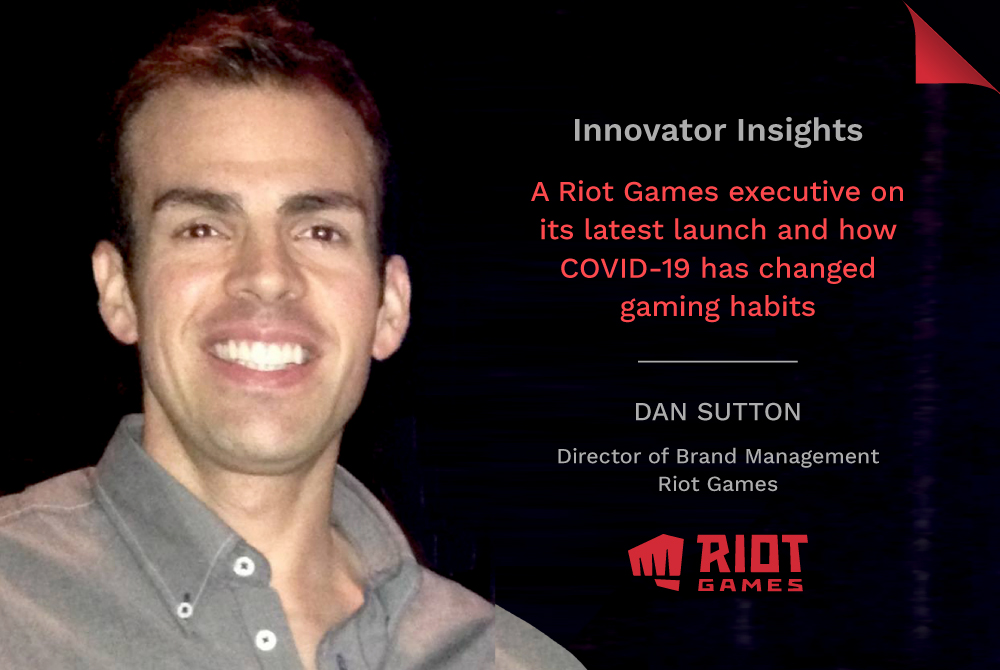 Riot Games has the kind of committed fanbase most brands can only dream of: fans talk endlessly on platforms like Reddit and they broadcast their gameplay on Twitch for “League of Legends,” the company's first (and best-known) game launched in 2009. Riot has a robust esports business for “League of Legends” that draws large crowds. Because of this highly engaged fanbase, Riot often doesn’t spend the amount of money other brands do on broad awareness campaigns because it knows its games will not appeal to everyone.

To build excitement for games, it often relies on its core players, says Dan Sutton, Director of Brand Management at Riot Games, who joined Riot in 2015. “We’ve always felt our player base did a lot of it for us, which is unique.” He says that in previous years when the company did buy paid media for acquisition, it didn't see good results, especially for ‘League of Legends,’ the multiplayer online battle arena game Riot is best known for. “We knew there was no ad you could make that would attract people who don't want to play it. So we rely on players to recruit friends.”

Since then, Riot has gotten much more sophisticated in its strategy, especially with the entry into mobile games, which require significant marketing around app-install ads. But with its more PC-based games, like “League of Legends” and “Valorant,” a free-to-play multiplayer first-person shooter game just released in June and still rolling out globally, “we’re still not going to drop $100 million on a new release. We won’t see the ROI because our games are meant to last. We’re not looking for 100 million players in the first month. We look for long term growth so that means thinking about when to be on and when to be off.”

Riot began building excitement for “Valorant” long before its release (see more on this in the Q&A below) by tapping into its core fanbase. It also began planning “Valorant”’s release before COVID-19 hit and caused global sheltering-in-place.

“COVID did two things: it hurt the job market globally and it put people at home all day,” says Sutton. “Generally, during recessions, gaming increases. And so with this downturn and sheltering in place, everyone in gaming is seeing a significant surge. Whether that’s purchased games or online service games that anyone can download for free, we’re seeing more people engaging in gaming without adding any significant additional media to the mix.”

To help fight COVID-19, Riot’s “League of Legends” community banded together in late May to raise relief funds through a 48-hour global live-streaming event that was supported by esports partners like Mastercard, State Farm and Red Bull. The virtual event included battles of various “League of Legends” leagues around the world and ultimately raised $630,000 for COVID-19 relief, in addition to the $4.5 million Riot had already donated.

For its part in fighting racial injustice, Riot Games pledged $1 million to organizations that fight systemic racism like the Innocence Project and the American Civil Liberties Union. Riot also said it will deploy $10 million through its corporate development team towards investments and startup programs focused on founders underrepresented in the gaming world.

Prior to joining Riot, Sutton was head of brand strategy at Google BrandLab, and before that he held senior roles at the Martin Agency, design shop Collins, Apple and CPB. Brand Innovators caught up with Sutton from his home in Los Angeles to discuss his career path, Riot’s latest game launch and how COVID-19 has changed gaming habits.

This interview has been edited for length and clarity.

Prior to Riot, you've worked at Google, and before that, several agencies. How different is working for a video game company than your other professional experiences? What learning curves were there? And how has it changed since you arrived?

The clearest difference working for a gaming company is that for many years, gaming wasn’t exactly niche, but the core fanbase is quite dedicated to gaming. In other jobs I’ve had, it’s people who like marketing or like brand building, but I wouldn’t say that a lot of them walk into jobs thinking they have to do this job because it’s for something they're super passionate about. Some people look at roles as resume building, whereas working in games, I’ve found I’ve had to prove myself to show I understand games and the people who play them more than any other part of my career.

Is that because so many people who work at Riot are big gaming fans?

Completely. Riot has tried to be extremely authentic to a very core audience for years, and we realize that we need to grow but compare to other companies I’ve worked at, at the end of the day you’re talking to the world. Apple, when they made the decision to put iphone in Walmarts, was part of a decision that shows they’re speaking to everyone. We make challenging games that take hundreds of hours to be good at and learn, we’re not talking to everybody. A person who is playing a game on their phone in the airport might be doing that just to kill time, whereas we are talking to people who think about gaming every day, and they're thinking about when they are going to get time to play the game.

It’s quite different from consumer goods, where you might have a core tech audience, but they are also trying to reach people broadly. Riot has looked at itself and said, we have an audience that we can serve.

You’ve been at Riot now for almost 5 years. How have you grown professionally since arriving there?

I came in hot and thought it would be best to go all in with a full-funnel campaign with a big concept and paid media. But Riot decided not to go through with it. The lesson I learned was that they were hiring me for marketing expertise, but they didn’t want a new model. They didn't want a straight up media-based ad campaign, that’s not something they’d typically done. They were looking for a kind of love letter to their core fanbase; they weren’t looking to reach everyone.

I learned you shouldn’t ignore something that was built before you got here, and then think your talent or skill set is going to be able to change the minds of people who built something. I had to learn more about the culture and what they had built historically without paid media to achieve the player base they had.

What does Riot’s media mix look like these days?

We do paid media -- mostly a combination of digital platforms -- for “League of Legends.” For our American campaigns, a lot of the successful work was from content creators making already really highly trafficked “League of Legends” content, so we worked with those people who were already fans of the game and making great content on their own. We just partnered with them and let those content creators make the work, and then we’d run it as preroll. “League of Legends” content gets a ton of viewership on platforms like YouTube, so we felt it was best to work with creators who loved the game and had big followings.

What’s the marketing strategy around that Valorant? What media did you spend the most in?

“Valorant” was in development for seven years, and the marketing planning began during pre-covid times. We watched a lot of bigger games go out, land studied how they marketed them. In general, they start promoting them by paying the biggest twitch players to play their games the week of the launch. Instead of paid media, a lot of publishers were going to twitch players and saying, “Let’s just pay them, it’s more efficient than traditional spend.” We saw that and thought, we’re not going to pay streamers to play our games the week of launch, because it really only brings very-short term benefit. Most streamers are running a business, so we can pay for a week, but then the week after another gaming company can pay them, and then they’re not promoting our game anymore.

So instead we invited every streamer we wanted to be involved to a virtual bootcamp where they can play months before the game came out. They gave us feedback on the game. Then we invited them into the alpha stage, and then a closed beta.

Our biggest marketing tactic within this was to allow every streamer we were working with to drop keys in the game that allow people to get access into the beta of “Valorant.” Allowing these popular streamers to drop keys created a new and unique way of marketing the game, which was great because the game wasn’t out yet and this created a significant amount of interest in the game.

When we launched the game 4 weeks after that and began using paid media, including acquisition and brand building campaigns across all the social platforms.

How has COVID has affected Riot?  What kind of pivots did you make?

The challenge is that, with so many people home, how do we keep our servers moving and handling the new load of players, while also getting to scale and continue making content updates to keep people engaged? We have to appeal to core players, who we know will play long-term, and the new player set, who we don't know if they are really into it or if they just have more time now.

We’re preparing for a world where we do not overspend on media because we know this surge could be temporary. We are not going to take advantage of a whole new crop of potential new people. We think that’s in bad taste.

Pepsi to Focus on Halftime Show & Activations During Super Bowl