Rémy Cointreau, a family-owned French business established in 1724, is returning to the Super Bowl this year after running their first Super Bowl ad last year for the Cointreau brand. This year the parent company bought an ad for another brand in its portfolio, The Botanist, a Scottish gin. 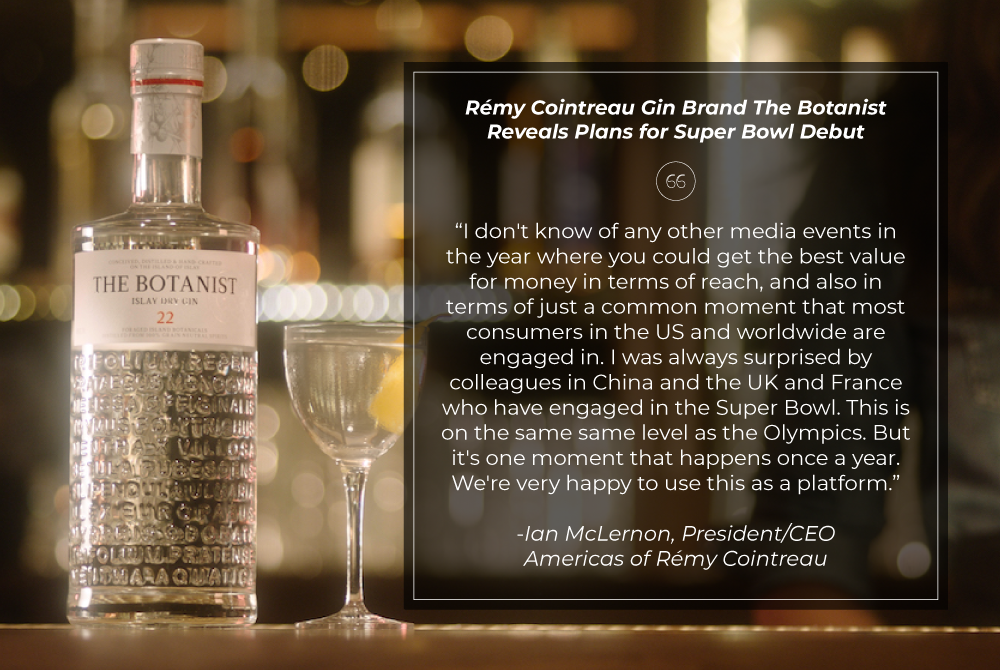 Rémy Cointreau, a family-owned French business established in 1724, is returning to the Super Bowl this year after running their first Super Bowl ad last year for the Cointreau brand. This year the parent company bought an ad for another brand in its portfolio, The Botanist, a Scottish gin.

“I don't know of any other media events in the year where you could get the best value for money in terms of reach, and also in terms of just a common moment that most consumers in the US and worldwide are engaged in,” said Ian McLernon, President/CEO Americas of Rémy Cointreau. “I was always surprised by colleagues in China, the UK and France who have engaged in the Super Bowl. This is on the same same level as the Olympics. But it's one moment that happens once a year. We're very happy to use this as a platform.”

Last year, Cointreau used its ad to debut a  partnership with the Independent Restaurant Coalition (IRC) – an organization of more than 500,000 restaurants and bars which was formed at the start of the pandemic to provide a lifeline to these establishments during the pandemic. In the spot, Cointreau created a love letter to the IRC to raise awareness to these businesses

“We want to be able to find a way of giving back but also to raise awareness of the challenges that they still face,” says McLernon. “The restaurant industry is struggling. There are 90,000 outlets that have closed during the pandemic and more may close unless there is funding to help them survive.”

The Botanist is launching a social advocacy campaign ahead of the game day to remind consumers of the challenges still facing the restaurant and bar industry. The effort urges people to take action to help save their favorite places to eat and drink. The integrated campaign will culminate in a Super Bowl ad called “The Spirit of Community” which is designed to drive awareness of this continued struggle.

In the spot, The Botanist tells the story of how the gin brand is one of the only distilleries in the world to be B Corp certified – an impact ranking that distinguishes companies with a high social and environmental performance. The 30-second spot, which was created by the film production company Blacksmith & Jones, the team behind the documentary The Water of Life, spotlights the local community on Islay, an island in Scotland, where The Botanist is produced, as well as the restaurant community in the US.

“We believe that we're building a sustainable business for the future,” explains McLernon. “This links with this campaign where we want to be able to go by we want to be able to help our friends and colleagues who work in in these 500,000 restaurants and bars that are at risk is 11 million employees in that sector that are having a tough time and we want to be able to raise awareness and be able to bring to life. It started last year visibly with our Super Bowl campaign for Cointreau. It continues this year. Cointreau and The Botanist are very different brands with very different target consumer profiles. But there's a common theme between both brands, which is that we believe in sustainability, profitable and responsible growth.”

Brand Innovators caught up with McLernon from his home in New York to discuss The Botanist campaign, building sustainable brands, and why a Super Bowl ad is the ultimate media buy. This interview has been edited for clarity.

You are back for a second Super Bowl after debuting last year. How did last year's success make you decide to return this year?

The campaign that we are launching with The Botanist is entitled “The Spirit of Community” and it actually builds upon what we did last year. We believe that we need to be sustainable, profitable and responsible in our growth. This is an example of where our brand is doing more than just trying to build awareness of our brand. Clearly, we have a brand objective, which is to boost the awareness of The Botanist, which we believe has exponential growth prospects ahead. Firstly, the gin category has performed well in the US over the last three years and during the pandemic has accelerated.

We believe over the next five to 10 years that there is exceptional growth to be had within the gin category for a number of reasons. One being that during the pandemic, what we've continued to see is consumers trading up in terms of the types of drinks they have in their cabinet and the types of products that they're consuming when they go to the on-premise. We've seen increased experimentation in the choice of spirits. Drinks that you have are broader today than they were three years ago. And consumers are embracing experimentation and trying new products, new brands and being more inquisitive in terms of those brands.Where does it come from? How is it produced? Who are the people behind this brand?

In the new “Spirit of Community” campaign for The Botanist, we tell the story of where we are from. We're from Islay Island,  an island off the West Coast of Scotland. We are the largest private employer on the island. We're not the biggest distillery on the island, but we're the biggest in terms of employment. We employ people from 19 to 75 years old on the island. Most of the main people in our business have been there since they left school or college.

Why do you think the Super Bowl is the best platform to help tell this story of social responsibility, brand purpose and sustainability?

Quite simply, it's the one moment in the year where you can get very, very effective reach in terms of a mainstream target. I think it's traditional media, for me in terms of TV is not dead. I think that there's still a role to be played clearly, we will use social media, YouTube, Facebook, Instagram, Twitter, and PR to amplify.

But in terms of reaching 69 million plus consumers in one :30 spot, this is the best way. And certainly, from our perspective, we were pleased with the results that we had 12 months ago. That's why we're back there with The Botanist spot this year. We're taking 17 markets. And what we have done is targeting the key markets where we have the core of our business and also the core of the on-premise business. So New York, San Francisco, LA, Austin, Chicago, Miami to name a few. But we were very happy with the results, the return on investment last year.

You mentioned that you'll be using other channels to support the TV buy. Can you talk about what that will look like?

Last year, we used YouTube, Facebook and Instagram. And if you look at YouTube, for example, we had phenomenal success. We were very, very happy with the results on YouTube. It was the most viewed ad that we'd ever had on record on YouTube. And it's a great way to drive traffic to people who want to see the ad to go to YouTube to view. But the big surprise last year, and I think it was a pleasant surprise was Twitter. We had great conversations that we were able to engage with on Twitter. We will be amplifying Twitter and more during this campaign versus what we did last year. But last year, Twitter was a nice surprise because of really interesting conversations taking place on this topic. Interesting.

What kinds of conversations did you see and how did you engage them?

It was interesting for us. We realized that just the basics sometimes of how you pronounce Cointreau? was all there was a proportion of the discussion is around this is not how you pronounce the product. Sometimes we were very close to our product and the heritage we assume that consumers can pronounce. We also recognize that the awareness of the IRC was not particularly high. And people were saying, ‘Who are the IRC?’ ‘Why is Cointreau getting involved?’ What we were able to do is find a way of getting that message relayed back to those people and getting people to talk about the topic. And there was a really healthy discussion about how on-premise the restaurants and bars are the lifeblood of most communities.

We didn't do the traditional Super Bowl spot, which was all about entertaining. We had very serious message. One of the stats I was very impressed with was that the effectiveness of the recall was high. It was higher than what we had expected. We were No. 8 on the effectiveness ranking of Unruly’s Super Bowl ad ranking, and we weren't the biggest in terms of production costs. We tried to minimize our production costs and focus more on getting more reach and being able to amplify the message through PR. That's the strategy that we will use for The Botanist community.

This year we are going into more markets because there is media inflation this year compared to last year. But I'm still very comfortable that it's a good investment on a good bet for the longer term for the brand, and also will help amplify this message at a key moment.

We have 14 plus brands in our portfolio. Certainly last year's experience was very positive and that's why we're back. I wouldn't say that we are going to be there every year, but we have big plans and big ambitions for our brands. You know, Brahms out of the box, and we want to double and scale in the next 12 months. So we will wait and certainly we're ambitious.