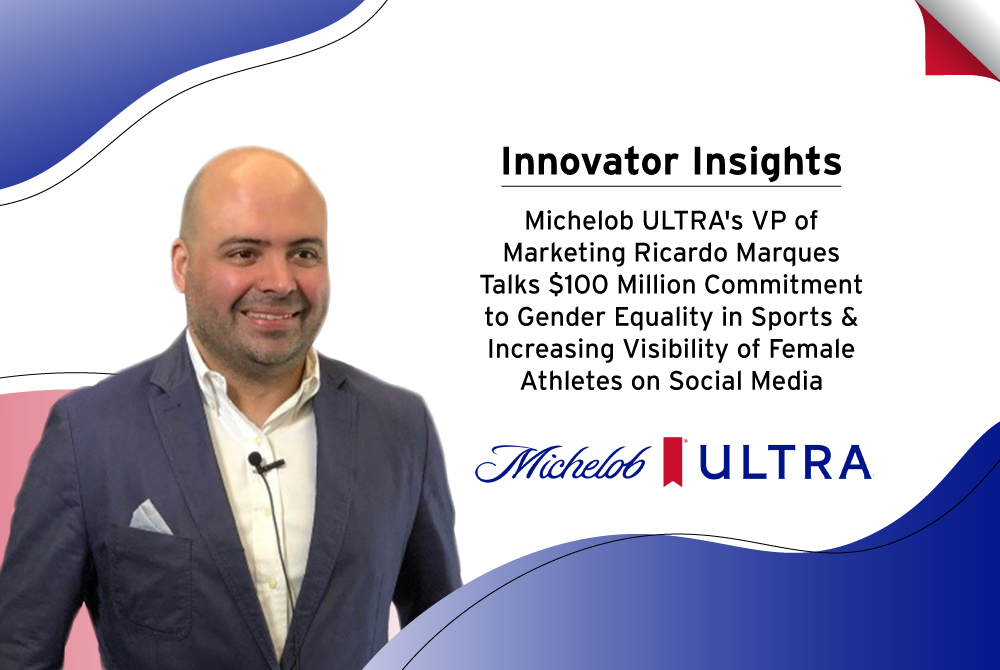 Michelob ULTRA wants to see women treated equally on the playing field and has revealed plans for a massive plan that aims to bring gender equality to women in the world of sports marketing. The company’s new five-year plan aims to ensure that women’s sports get the same amount of attention in the media as men’s sports.

To this tune, Michelob ULTRA is committing $100 million over the next five years to increase visibility for women’s sports. The three-part plan includes dedicating 50% of lifestyle media inventory to content that features female athletes and women’s sports by 2025; representing male and female athletes equally in all advertising creative; and ensuring equal representation on the brand’s Team ULTRA talent and influencer roster.

“We are very proud of this announcement to commit $100 million over the next five years to supporting bringing more visibility and bringing more women’s eyeballs behind women’s sports,” said Ricardo Marques, vice president of marketing, at Michelob ULTRA. “We are committing part of those dollars to media, 50% of our lifestyle media, which represents a 40% increase versus where we are today and it involves our roster of talents and we are committed to bringing more female athletes to our roster and then of course mobilizing our creative efforts. We invest a lot in advertising and we believe that that is a powerful medium to bring more visibility to women’s sports and female athletes, so we are committing to bring more representation of female athletes to our efforts.”

The brand has been increasingly raising the profile of female athletes over the past 18 months including becoming the official beer sponsor of the WNBA and boosting female representation on its influencer roster by signing athletes including Serena Williams and Alex Morgan.

The campaign is inspired by Nneka Ogwumike, WNBPA President, CeCe Telfer, the first openly transgender female athlete to win a NCAA title and Andraya Carter, basketball reporter/former NCAA athlete for their work in promoting progress in sports. They star in a commercial about the impact female athletes have had on the sports world.

Brand Innovators caught up with Marques from his home office in New York to learn more about the five-year initiative and how this fits into the brand’s platform and business goals. The conversation has been edited for length and clarity.

Can you talk about Michelob's brand pillars and how this commitment to gender equality in sports supports these initiatives?

This is a brand that was found on the notion of balance and on the notion of joy. We always say, ‘It is only worth it, if you enjoy it.’ and we believe that the world of sports would be a lot more joyful if it would be one that is also more balanced in terms of gender equality. This is very well connected to what our purpose is as a brand. It also caters to our audience, given the fact that we have a large base of female drinkers. Michelob Ultra actually over indexes on female drinkers. So through and through from a brand purpose standpoint and then from a business standpoint, this effort very much connects with what this brand is all about.

What is the strategy behind this massive investment and why did you  decide to make such a huge financial commitment to the cause?

Looking at the challenge and also the opportunity in this space, we concluded that 1) it needs to be a long term commitment and 2) it needs to be a sizable and a meaningful commitment. This is something that cannot be addressed with a campaign. It needs something that has to be a part of what we do for the foreseeable future. That is why we believe that five years is a good place to start and hopefully if other brands join us in this very same effort, probably in five years we can make a dramatic positive impact to accelerate and move forward women's sports.

Again, the notion of investing in a meaningful way, $100 million is a lot of money, and five years takes us past that couple month campaign idea and into more of the long term. That is what we wanted to do to generally drive that impact. The other aspect that is important is that this is not dedicated to one particular sport or one particular league. It is across multiple different sports. It is from basketball to golf to running and beyond.

How will you ensure that female athletes will really be represented more?

Part of this is what we started doing 18 months ago before we announced this commitment. If you look back over the last 18 months, we have brought more female athletes to our roster. I am thinking about Serena Williams, Alex Morgan, for example. We started to feature more female athletes already in our creative, at the Super Bowl for example, that was a big moment and many other programs since the Super Bowl, over the past 18 months. We have been on this journey already, so now what we want to do is to double down and keep focus, mobilizing our amazingly talented creative partners and putting the resources forward to continue this journey with this firm commitment that we put out there. We are in Super Bowl season, it is in full swing. We are looking at a number of exciting creative spaces, but that is yet again another moment in what we are trying to do to increase visibility around women’s sports and bringing our partners to the forefront.

All of us are spending more time in social media than ever before and that is where a lot of conversations around sports are happening. So that was a natural place for us to engage our audience and also by doing something very simple that is something that everybody can get behind. The campaign invites the audience to save the highlights of women's sports because that will also change what you see in your feed. The more you save, the more you engage with women's sports highlights and women’s sports content, the more the algorithm will put that content in front of you which increases the positive spiral of visibility for women’s sports.

We also find it interesting that the ribbon icon resembles our Michelob ultra ribbon , so we thought that was an interesting play on the brand’s iconic ribbon. It was all about using social media as a platform to create this chain reaction and going to where the conversation and where the audience for sports in general already is.

Will we see an improvement in the representation of female athletes in sports in 2022?

It is a step-by-step approach. Every single day, every single year makes a difference, as long as we are committed. We hope that potentially other brands will join us in supporting this cause and then going back, why we announced in this particular time, it was striking to us that every single time after a global sports moment, most recently, The Olympics, viewership goes up but then after, those moments tend to fade away. So for us, it was timely to come after such a big moment like The Olympics to engage or reengage the audience to keep watching women’s sports. Women did incredibly well during The Olympics and the excellence in women's sports is more than proven across many different leagues. I cannot tell you that next year will change this reality dramatically, but we hope to make meaningful progress as we embark on this five-year journey.