Brian Lancey, VP of global sponsorships and consumer marketing at Mastercard, certainly didn’t expect to have to pivot the entirety of the global entertainment marketing and sponsorship programs he oversees. But given the brand’s increasing focus on digitally accessible events, the pivot was easier than it was for many other companies. 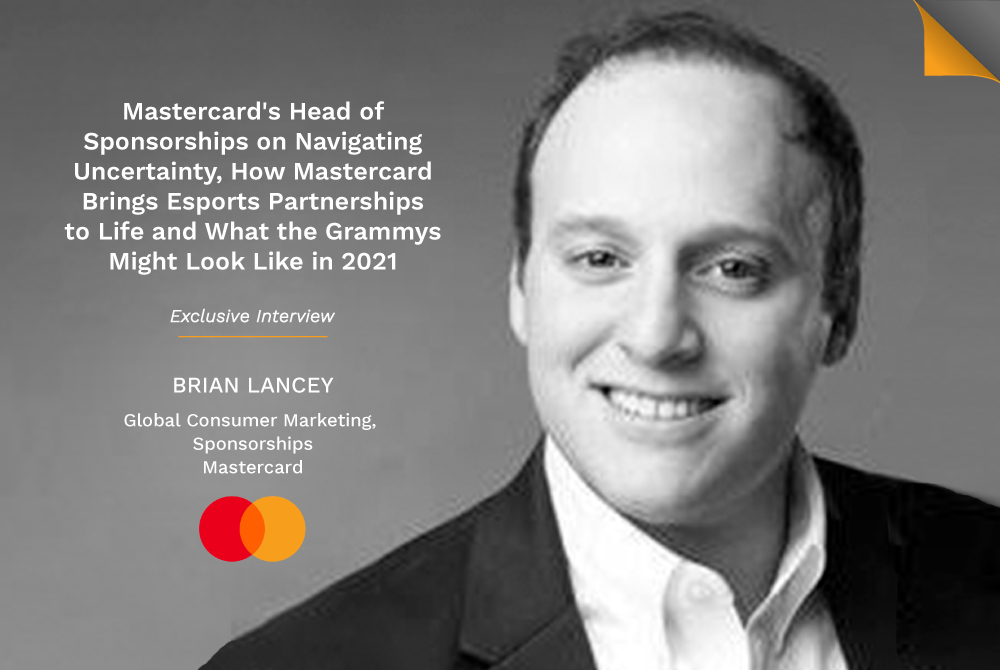 Brian Lancey, VP of global sponsorships and consumer marketing at Mastercard, certainly didn’t expect to have to pivot the entirety of the global entertainment marketing and sponsorship programs he oversees. But given the brand’s increasing focus on digitally accessible events, the pivot was easier than it was for many other companies.

Lancey, who leads entertainment marketing, events and sponsorships around the world for Mastercard, joined the company in 2015. During his tenure, the brand has placed big bets on esports via its sponsorship deals with League of Legends, the professional esports league for Riot Games’ franchise title. Mastercard has also extended its longstanding Priceless platform -- where it partners with musicians to bring fans exclusive concerts -- via partnerships with pop stars like Camila Cabello. Mastercard’s other sponsorships include Major League Baseball, the PGA Tour, the Cannes Film Festival and the Grammys.

Events, of course, have had to pivot to fully digital experiences in the wake of COVID-19. What would have once been an in person Camila Cabello concert sponsored by Mastercard morphed into two virtual concerts in May and June, enabling fans to watch her shows from their homes. This fall’s upcoming League of Legends championship finals were originally slated to be held across six cities in China, but are now going to be held in Shanghai. Though how exactly a live audience will attend the finals in Shanghai is yet to be announced, Mastercard is planning on a digital-heavy expression of its sponsorship of the championships, which draws upwards of 100 million viewers around the world.

With so much uncertainty about when events will come back fully, brands like Mastercard must plan around a number of outcomes. “It’s a combination of planning for both physical and digital,” says Lancey.  “League of Legends has been smart about thinking through how they maintain competitive integrity and still allow the championships to go on. However it looks, it doesn't change our sponsorship much. We approach our sponsorships now by thinking about how we can bring the Priceless experience to people in a safe way and make sure we’re putting cardholders, customers and partners in the safest environments.”

Lancey joined Mastercard after working at startup Brand Synergy Group as Vice President of Strategic Marketing for five years. Prior to that, he held a number of roles on the brand side at Mars, Dr Pepper Snapple Group and Cadbury Schweppes. He’s also had roles on the agency side at IMG and Octagon.

Brand Innovators caught up with Lancey from his home in New Jersey to discuss how sponsorships and live events have changed, how he helps markets around the world bring Mastercard’s esports partnerships to life and what he thinks events like the Grammys might look like in 2021. This interview has been edited for length and clarity.

How have sponsorships evolved over the course of your career?

The space has evolved into what I like to call passion-based consumer marketing. Mars, where I worked, and Mastercard embrace this idea that sponsorships aren’t just founded in events. We’re now seeing organizations look at it as this full 360 picture that there’s so much that  happens beyond the event itself, so you really should be planning beyond the event. For example, the Super Bowl is a finale, pinnacle event, but you do so much in the 12 months leading up to it, like tying events into advertising, customer marketing, social and all other channels, all to drive back to that passion of the brand.

With Mastercard it's the same, whether it’s around the Grammys or a music artist or esports. We use it as that connective tissue between our products and the consumer, and it’s using that passion-based idea to bring things together and drive brand engagement and loyalty.

What about working at Mastercard was attractive to you?

I’ve worked on blue chip brands for years, from my early days when I worked with Pfizer and Century 21 and Verizon at IMG and Octagon, to later on in my career at companies like Mars. I then went the startup route and did that for five years and got into leading a group and being involved in everything again, as you often do at startups. After doing that for five years I was excited about working on big business again. And then when the opportunity came up at Mastercard -- it was an opportunity to drive passion-based marketing at a global level, and those opportunities don't come around often. Working on big brands is what I do well.

How do you ensure sponsorships and events are executed well across local markets?

For esports, we are much more engaged as a global consumer team with local teams. Whether it’s with my colleagues in Germany or Taiwan or somewhere else, they don't feel comfortable driving the esports entirely on their own yet, because esports is still relatively new in the grand scheme. So we help them build the consumer value proposition.

With something like music, where we’ve been involved for so long, we provide toolkits and strategic guidance to local teams, but they are more comfortable executing that on their own. We are more of a strategic partner versus a program builder; we guide them through that process

For example, if China is building a Grammy program, we have a guidebook they use, and they share the programming, and then we give feedback. Whereas esports we have much more day-to-day involvement.

How are you approaching sponsorships this year with so many things upended by COVID-19?

We’ve been fortunate because the entertainment space was already pivoting to the virtual and digital environments. We were impacted, obviously, because events weren’t happening physically. But we were already looking at the digital space, and in esports we had shifted our marketing efforts from physical to digital. So this impacted us only on a small scale.

The concert business has taken a pause, of course, but when you take a step back, the consumer journey in this world has been in the mobile space already. Esports was born out of  video games, which made the evolution from playing with friends in person to logging online and playing virtually with friends.

For music, we were fortunate the Grammys did happen this year before lockdown went into place. But as we’re thinking about it for 2021, it will impact how we’re bringing Mastercard’s brand to life for the music community.

When we look at those two, music will be more impacted as we think about the environments in which people will be consuming. Even if there are vaccines available or we get to a point with the virus that officials allow larger gatherings, I think we’ll still be looking at bringing consumers in digitally.

How do you think the Grammys might look in 2021 if it can’t be the full event as it’s always been?

99% of people watch it on TV anyway. For those in LA, there’s the week of events that lead up to the Grammys, which have always been very in-person. You might see chatter online, but at home there’s historically been very little opportunity to participate in the leadup events unless you're in LA. For me, it’s about looking at that leadup window and how we might expand that experience digitally. The events throughout the week leading up to the Grammys -- that’s the biggest opportunity that will allow all of us at home to enjoy the Grammys more.

The leadup is often a lot of sessions and panels with labels, music publishers and artists. Now there’s an opportunity to look at how you can digitally expand the audience of those sessions. Maybe it’s a little different than the virtual concerts we’ve been seeing lately. Maybe people still rent venues in order to create a better experience for the at-home viewers, as people might start getting fatigued with the at-home performances. So rather than Alicia Keys doing something for the Grammys from her home, maybe she does it from a venue.

For artist showcases, it’s also not just giving consumers at home new ways to engage, but giving artists a bigger audience of thousands -- not just a room of 200 people.

Do you think if the Grammys happen fully, as they have in the past, that there will still be digital showcase opportunities?

I would like to hope so. I think we all get comfortable with what we do. The Grammys is far enough away where there could be a similar event as it has run in the past. But I hope organizers beyond the event itself think about engaging a digital audience. There are so many people who are fans or can't make it and would love to see these panels and showcases. Why wouldn't we start thinking more about engaging people who are not in LA?

For events overall, hopefully organizers will think about how to progress and innovate rather than scale back.

Some companies like Activision had put big efforts behind esports, launching in-person events all over. Obviously that has changed. What do esports look like now from a marketers’ perspective?

Esports was impacted, but compared to traditional sports, that impact was minimal because with esports, engaging with the digital audience has always been key.

The League of Legends championship finals in 2018 had 99.6 million people viewing for a single event, the largest viewership at that time. We used to say, we can market to the 30,000 people sitting in the building, or we can also engage with the tens of millions of people at home. The in-stadium audience is great, but in the absence of that audience, 95% of them are at home anyway. So you're already thinking about at-home audiences in your marketing plans. Yes, we lost the physical event, but when you look at the League of Legends championship series, we really just needed to pivot a small fraction of our work because we were already engaging with this community.

How have you seen esports change in terms of marketer interest this year?

Industry-wise we’ve definitely seen a lot of brands get into the space of esports. There’s a tipping point there and the pandemic catalyzed that. We were one of the first non-endemic brands in esports, and now CPG, tech companies and many others are sponsoring. You've seen this growing acceptance by blue chip brands to look at esports as an authentic entertainment platform that might not have been on that level a few years back, and compound that with the pandemic, and now everyone’s looking at it. Everything going digital has made it easier for companies to test and learn and see if it's the right fit for them.