This weekend, the marketing agency Known will be celebrating its one-year anniversary with a history-making Super Bowl campaign. The agency has been tasked with advertising the first all-civilian mission to space, a collaboration between Shift4 and SpaceX in support of St. Jude Children’s Research Hospital. Brand Innovators caught up with Mark Feldstein, Partner & President, Studios at Known to discuss the campaign and making a Super Bowl ad during a pandemic. 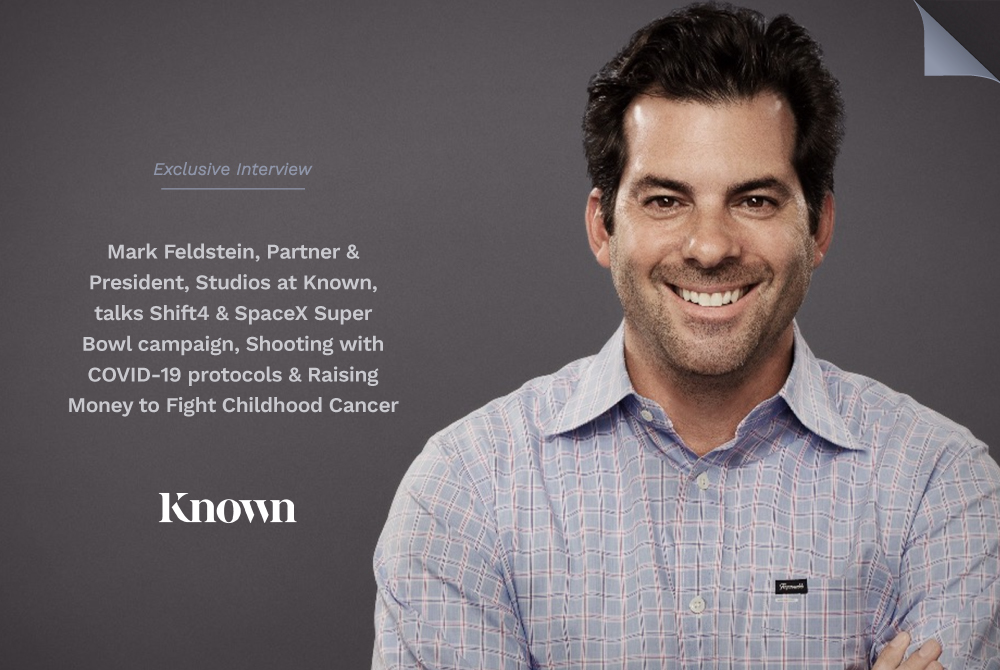 This weekend, the marketing agency Known will be celebrating its one-year anniversary with a history-making Super Bowl campaign. The agency has been tasked with advertising the first all-civilian mission to space, a collaboration between Shift4 and SpaceX in support of St. Jude Children’s Research Hospital. Jared Isaacman, CEO and founder of Shift4, a payment processing company, hopes to end childhood cancer by raising $200 million for St. Jude.

The 30-second Big Game spot highlights the space mission, Inspiration4, as well as the launch of Shift4’s new ecommerce platform Shift4Shop. However, most importantly, the goal of the spot is to “do the most good.” On the most visible platform in the world, Known is hoping to raise awareness for the fight against childhood cancer.

“We knew that creating a commercial for this year’s Super Bowl was the way to go,” says Mark Feldstein, Partner & President, Studios at Known. “It gave us the biggest stage in the world and the most eyeballs that you can get. We are reaching over 100 million people. That was really important to us because our goal is to raise a ton of money for St. Jude. The more people that see this spot, the more impactful the campaign will be. It was a huge responsibility.”

A self-proclaimed “modern marketing agency,” Known is the first company of its kind. The brand pairs PhD data scientists with expert strategists, and award winning creatives to optimize marketing performance. The consumer-centric agency works with brands on media optimization, adjusting marketing strategies in real time after testing. However, with this campaign, Known wasn’t just tasked with marketing a product, they were marketing something much less tangible.

“When you think about it, this commercial is not just selling a product; It’s selling a dream,” says Feldstein. “It taps into truth and the desire to push the limits of what is humanly possible. To see what’s beyond the horizon and try to touch the stars. It’s pretty magical and very relevant. We knew that our commercial had to create this feeling, it had to emotionally connect to people.”

Before Super Bowl LV, Brand Innovators caught up with Feldstein to discuss Known’s strategy for the new campaign, the diverse Hollywood team behind the camera, and producing commercials under strict COVID-19 protocols. This interview has been edited for length and clarity.

What was the strategy behind the Shift4 & SpaceX Super Bowl campaign?

We are advertising something that’s history-making: the first all-civilian mission to space. On top of that, we’re offering everyone at home the opportunity to come along for the ride. And we are trying to raise $200 million for St. Jude’s Children’s Research Hospital. That is our ultimate goal: to fight childhood cancer. It’s obviously critical to get that strategy right.

We also wanted to get attention for the launch of Shift4’s new ecommerce platform, Shift4Shop. It was critical that we use this historic human achievement of going to space to do the most good possible. That was the driving force. We want to inspire millions around the world with this mission of hope and generosity. It’s really rare that you get the opportunity to be a part of something like this, on a scale as big as this. To tell this story was a dream come true for us at Known.

How did you decide to execute the ad based on the creative brief?

We wanted to make this ad exciting and attainable for people. The creative brief was to help the Shift4 team conceptualize, brand, and position this mission to outer space. We wanted to make it clear that we are using this historic moment to do good and inspire people.

Talking about our strategy and data science group is really relevant here. We have this seamless part of our company when it comes to strategy, science, and creative. We worked hand-in-hand with the data and strategy teams to identify an insight which is the human truth behind the campaign. Everyone has the childhood dream of going to space and the desire to touch the stars. That’s something that everyone has felt, it connects to us. We wanted to tell that story in a way that was exciting and attainable, we wanted people to connect to it.

How did you assemble the behind-the-camera team for this project?

Our roots as a company are in entertainment marketing, so to tell our story, we turned to the best storytellers in Hollywood. We wanted a world-class, well-rounded, and diverse team from different backgrounds and perspectives to tell this story. We want to make sure that the team on this project was as diverse and universal as the people we’re trying to connect to.

Everyone who was involved has such a connection to this, that’s why we picked them. Octavia Spencer was in Hidden Figures. Bryce Dallas Howard’s father directed Apollo 13 and her mother trained to be an astronaut. It doesn’t matter if you are famous or an everyday person, you still look up at the stars. You are still drawn to this idea of space. People were so excited to be a part of this project.

How did you craft the tone for this campaign?

We intentionally chose the song “Twinkle, Twinkle, Little Star” for the spot. We used this childhood song, but made it attainable by doing it in an adult and magical way. When you hear the song, it captures your imagination, you get sucked in. That was very intentional.

The suit is the real hero of the ad. We did it with a slow reveal to build interest and intrigue. At the end, we wanted the audience to picture themselves in the reflection of the visor: You could be going to space. It’s a very simple and very powerful visual. Everything about the spot is like that. It’s a very powerful message, we didn’t need to cloud it with a lot of lasers and different things.

It’s a very quiet spot, but the message is loud and pure: Everyone has the chance to go to space. We didn’t need to say much more than that.

What was unique about producing and creating an ad in the time of social distancing?

We do a lot of shooting so we're used to COVID-19 protocols. It’s just the new reality and something we take very seriously. This was on a whole different level because a lot of our team members were also working on other projects. This shoot was the poster child for COVID-19 precautions. We had two separate stages, one to shoot the spot and one for the clients. We were very careful and there were not a lot of people on set. Everyone wore face shields and masks. On the client side, we all had our own desks separated by plexiglass. It was crazy! Any government official would be so proud. We are buttoned up with protocol, but we went above and beyond for this shoot. Everyone felt very safe.

How does the purpose of supporting St. Jude Children’s Research Hospital tie into the marketing campaign?

That has been driving everything. It’s very important to us. We worked very closely with St. Jude. They were part of the whole process, we wanted to make sure they were comfortable with the creative concept and the music. They were right there by our side.

For the spot, we wanted to do something with a magical quality to it. We picked the song “Twinkle, Twinkle, Little Star” because of its connection to children. The mission patch itself that we designed has four stars on it to represent Hope, Generosity, Leadership, and Prosperity. We also incorporated the child from St. Jude’s logo onto the mission patch. It’s very much a part of everything we are doing.