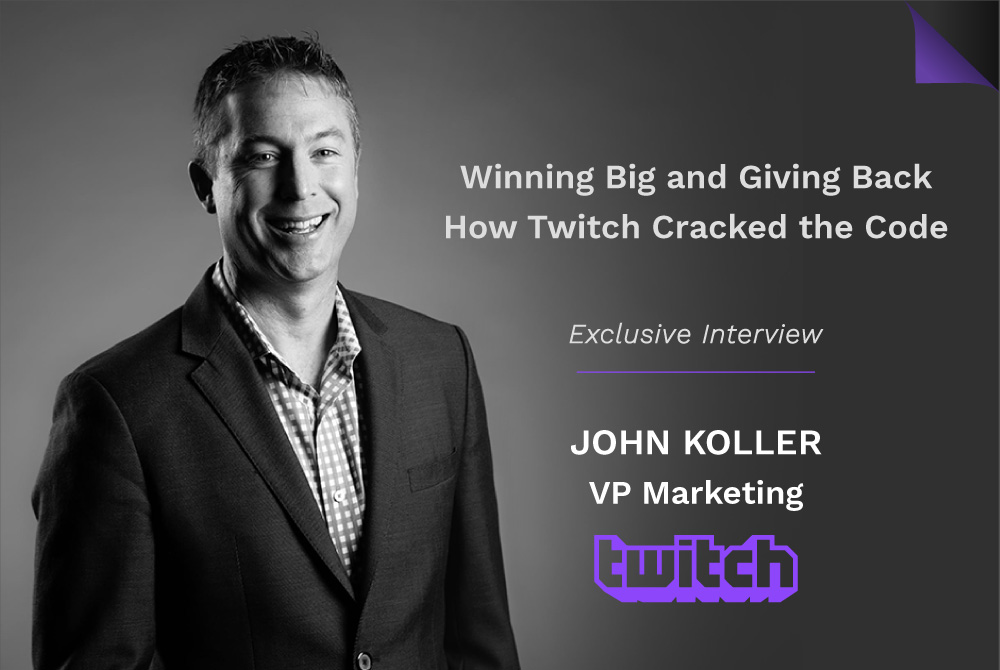 Many marketers across virtually every category have spent the past seven weeks pivoting their business to accommodate the current quarantine market conditions.

But one marketer whose business was already well-prepped for the work-from-home transition and live-stream craze is Twitch’s VP of Global Marketing John Koller. Already a major online destination for under-35 male gamers, Twitch’s audience has soared in the post-quarantine media landscape as audiences seek out more connectivity and virtual community beyond what platforms like Instagram Live and Zoom can provide.

“Twitch is uniquely positioned for the situation we’re in now,” says Koller, who joined Twitch in 2018 following 19 years with Sony PlayStation, including five as VP-Marketing. “We’ve been operating virtually our whole lives, so this is kind of a Twitch moment.”

Given the huge impact COVID-19 is having on media and entertainment, Brand Innovators is launching a Cultural Marketing vertical of its Innovator Interviews series, profiling forward thinkers in the space. New Q&As will be published every other week and focus on boundary-busting marketers who are finding new ways to reach customers. Given Twitch’s leadership role in innovating during the past eight weeks, we couldn’t think of a better company to highlight for the launch of the Cultural Marketing chapter of this new series.

Not only has Twitch become a major endemic play for popular video game launches like “Call of Duty” and “Fortnite,” but Twitch’s reach has broadened to become a go-to for A-list musicians like Diplo and Travis Scott, who’ve used the platform to host popular live-stream events and even debut new music; major sports leagues like the NFL and NBA; and a growing list of blue-chip brands like Chipotle, Ally Bank, Procter & Gamble and Verizon, who’ve all hosted music and/or e-sports-themed content on the platform.

Such an influx of new activity has translated to the audience, too. Since seeing a record 10 billion total hours streamed in 2019, according to Twitch, the company has experienced significant month-over-month growth in viewership since February 2020, a 50% spike compared to the same period 12 months ago.

That’s why Twitch, along with its parent company Amazon, has also been at the forefront of COVID-19 philanthropy and charity events. Stream-Aid 2020, an all-star music and esports benefit event that took place on Twitch March 28, raised more than $2.7 million for the COVID-19 Solidarity Response Fund for the World Health Organization, powered by the United Nations Foundation. Twitch has since become one of the go-to platforms for other fundraising events, including Global Citizen and WHO’s “One World: Together At Home.”

Having a give-back message woven throughout its programming has helped Twitch stand out among the pack of brands who, in Koller’s opinion, have already created a sense of homogeneity in their crisis messaging. “If we have to see one more piano-laced ad from some random brand about all they’re doing, humble-bragging for what’s happening now, we’ll all get sick of it,” Koller said in an April 28 appearance at Brand Innovators’ Cultural Marketing Livecast. “Studies have shown that you just showing up doesn’t actually help your business. But having a point of view on how you can actually assist someone during this time actually will.”

Brand Innovators caught up with Koller from his home in Dublin, California, where two of his three young children made occasional Google Hangout cameos in between his discussion of fostering digital community during quarantine, influencer marketing and the CRM strategy he’s building in real-time to retain Twitch’s ever-expanding user base. The below has been edited for length and clarity.

Q: You were with PlayStation for nearly 20 years, including five as VP of Marketing. What made you want to make the switch from hardware to platform with Twitch?

John Koller: I loved my time at PlayStation. I launched six of the hardware platforms and had kind of done everything I could do. You just reach a point where you look at the clock, like what’s next? And what I wanted to do was get a lot closer to where I think the future of marketing really is, which is community marketing, creator marketing and influencer marketing. And I just think that the days of me prepping Super Bowl ads, like I’ve done in the past, are probably gone or at least waning. And it just felt like there’s no better place than Twitch to get to a massive, rounded community. Everybody has small, little pockets of like-minded individuals that we hang out with in regular life, and Twitch is the broad embodiment of that.

Q: Was it a steep learning curve to go from working with seven and eight-figure marketing budgets for big game launches to a platform that’s all about organic messaging?

JK: Yes, it was a shocker for me because I’d worked at PlayStation for so long, and worked with a lot of large brands that had a lot of money – the Taco Bells and Nikes of the world. And you start to say, “This is kind of a standard for those that are the most successful.” But it’s not.

And so, I started looking at this and saying, “You don’t need a Super Bowl ad, and you don’t need massive budgets necessarily to actually do the job of marketing that we all wanna do.” And there’s a lot of brands that are actually realizing this now. My first example of this was Red Bull, who sponsored Ninja. He’s left Twitch since, but Ninja was probably the best-known gamer on Twitch and probably still is. Red Bull did a lot of work with him on a real one-to-one basis, things where you would think, “That’s a granular approach to marketing.” But Red Bull looked at and said, “This is how we can reach the hearts and minds of those 700,000 people that are interacting with Ninja right at this moment. And I’m gonna give you something at this moment in time.” So a lot of brands are seeing that you don’t need big budgets for that, but you do need to really understand who your audience is and the emotions and behaviors that come with that.

JK: We did a charity event called Stream-Aid, and one of the artists who participated was Charlie Puth. And he’s known for hitting a really high note on “Attention” and some of the other songs that he has. But in the stream, which was live, he couldn’t hit it and he got roasted. Because it’s in real-time. And he said, “Hold on, hold on, I’m gonna hit it.” And he just couldn’t hit that note, so this was clearly a live moment. He’s having this back and forth with the stream, and eventually he hits it and says “See, I got that for you.” And everybody was cheering. Those are the kind of things you don’t want to miss. With PlayStation, you couldn’t do that, and with Twitch that’s something we can. That’s the moment Twitch is in right now.

Q: Beyond endemic gaming publishers, what are some ways consumer brands are embracing and experimenting with the Twitch platform?

JK: For Stream-Aid, we had a trio of brands as our sponsor – Verizon, Gillette and Procter & Gamble. And it’s very rare that it was parent-brand Procter & Gamble, and not Tide or another product. But they came in at the P&G-level, and we had their CMO [Marc Pritchard] come on during the stream to do a quick message. He wanted to be supportive at the highest level, and show that Procter & Gamble is making a move to reaching this demographic. Twitch caters to a specific type of audience, mostly under 35 and fairly tech savvy, and he was saying that P&G was supportive of this moment and this charity effort. They ended up helping us a great deal, we ended up raising over $2.7 million with a goal of $2.5 million. So it’s been nice to see a lot of brands coming in and saying, “I’d like to be able to target this under-35 gamer, what’s the best way to do that?”

Q: I’m assuming Twitch’s userbase is also predominantly male, but are you seeing more audience diversity as your reach expands?

JK: It has gotten more diverse. It’s about 65/35 male and mostly under 35. Our average age is 26, 27. Interestingly, we’re seeing a lot of the teen audience come in right now.

Gender is certainly important to us. We have an influx of female creators coming to the platform, so the thought is we’ll see more female viewers as a result. The more diverse we get on content ideas, with things like music and other areas, the more that will be an instigator to be able to get more diverse. We’re still pretty gaming-heavy, and within that pretty shooter and action heavy. We’ve got a lot of work to do, but I think this moment will probably change a lot of that activity.

Q: How is the absence of live sports on broadcast and cable manifesting itself in activities on Twitch?

JK: Demographics are interesting to me right now, because a lot of it has to do with the behaviors and emotions that live within all of us. “Thursday Night Football” comes up a lot with my group. It’s an amazing property with the NFL, but the Twitch manifestation is very different than what you might see on the NFL Network or Fox. And a lot of that is because you’re sitting there, you’ve got a co-streamer who’s casting over the top and knocks out the audio, and you have this chat going like rapidfire. It really is like the world’s biggest couch. It’s very difficult for some of the older generations to grasp that. But it’s an interesting sociological experiment to see the different generation markers.

Q: With so many new people coming to Twitch in the past several months, what does your CRM strategy look like right now?

JK: What I’m working on now on the marketing side is keeping all these people. A lot of times you come to Twitch and you’re like, “I love all these things, so what’s next?” Esports can be a “What’s next?” answer, but you also want to connect them to things and communities that connect to them emotively. That’s always the thing that matters most, to make you feel included at this time. Whenever we come out of this, I need to keep the people that have come in engaged and excited and loving their community. It’s like a bunch of friends you hang out with.