“The Sims,” the popular video game that allows players to create lifelike simulations and avatars that look like themselves, has been a fixture in the gaming world for 20 years. Despite its popularity, though, the game has made mistakes when it came to inclusivity and proper representation of different types of people. 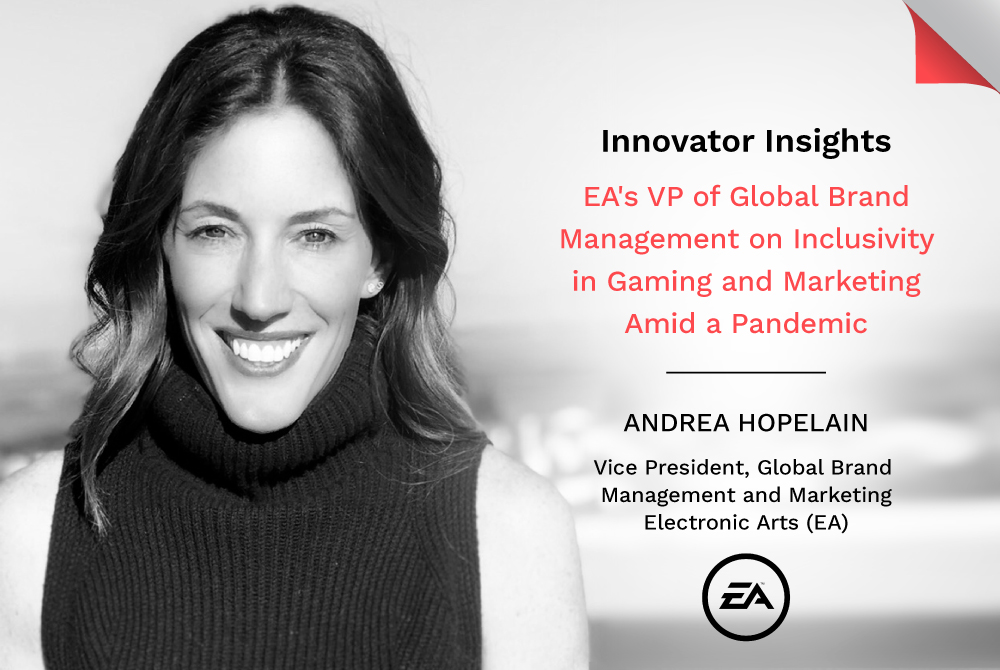 “The Sims,” the popular video game that allows players to create lifelike simulations and avatars that look like themselves, has been a fixture in the gaming world for 20 years. Despite its popularity, though, the game has made mistakes when it came to inclusivity and proper representation of different types of people.

Andrea Hopelain, VP, global brand management and marketing at EA Games, says ‘Sims’ has been working to be more inclusive, and frequently takes feedback from its players to achieve that goal. To improve the game’s inclusivity and celebrate Pride month, EA last year released content within “The Sims 4” (its latest iteration) to let players express their support for LGBTQ+ lifestyles by adding options like gender neutral doors to put in simulated buildings, along with 17 different Pride flags, which publishes “The Sims.” But EA, which is known for games like “Plants Vs. Zombies,” the “Madden NFL” franchise, and “Star Wars Jedi: Fallen Order,” partially missed the mark.

“We thought we had covered all the bases, but unfortunately we left out the lesbian flag,” says Hopelain, who oversees marketing for games, mobile and PC at EA. “We were immediately called out by our player base for the omission. With the support of fans and our inclusion sources, we were able to address this quickly inside the game, while we acknowledged our commitment to continue to learn.”

For this year’s Pride celebration, the brand took it one step further and launched a partnership with MAC Cosmetics to offer makeup colors and styles that fit darker skin tones. “We’ve gotten feedback from our community on both the diversity of skin tones that we offer inside the game as well as how we can improve the appearance of makeup on darker skin tones,” says Hopelain. The partnership with MAC, long known for its inclusive makeup lines, is “giving our players exponential new ways to self-express authentically with their Sims. Partnering with MAC Cosmetics on this experience was a natural fit for our players and our brand given our shared values of diversity, inclusion and representation.”

The rollouts during Pride are part of a larger effort EA and “The Sims” have been making to ensure that all gamera feel welcome. Last fall, “The Sims” introduced Hijab and Kufi accessories into “The Sims 4.” Although players have been creating their own in the game, EA wanted to include this content officially, but wanted to ensure they were doing it correctly. “As we explored design we sought expertise from coworkers and fashion experts embedded in those cultures and their traditions to avoid missteps as well as create looks that felt relevant and appropriate to today’s generation,” says Hopelain.

EA also took a stand against racial injustice when it announced on May 31 that it would delay its “Madden NFL 21” announcement -- a postponement of one of its most popular franchises -- in light of protests that broke out after the killing of George Floyd by a Minneapolis police officer the week prior. “While we do inspire the world to play, there are much more important conversations to be had right now,” says Hopelain. “Placing our commercial objectives in front of that doesn’t feel like we’re listening or thoughtful about this moment in time or about the support our players need.” (The game is now set to be released Aug. 25.)

The company also announced $1 million in donations to the Equal Justice Initiative, the NAACP Legal Defense & Educational Fund, and other causes dedicated to stopping racial injustice. It also said it would give employees a paid day every year to use for volunteering, as well as announcing it would celebrate Juneteenth with an additional company-wide volunteering day and participation in forums and virtual activities organized by the Black Electronic Arts Team employee resource group.

Though EA is the first gaming company Hopelain has worked at, her experience has long been associated with toys, media and entertainment. She joined EA in July 2018 from Hasbro, where she was VP of global brand strategy and marketing. In that role she oversaw the portfolios of franchises including Disney Princess & “Frozen” toys, DreamWorks/Universal’s “Trolls,” Disney’s “Descendants” and Littlest Pet Shop. Prior to that she was VP of marketing at Sony Pictures Entertainment, leading the Sony Pictures Television franchise development efforts. Earlier in her career she worked at Disney and ESPN Media Networks working her way up into more senior marketing roles.

Brand Innovators caught up with Hopelain over video chat from her home in the Bay Area to discuss her career path, diversity and inclusivity, how gaming creates connections with people amid a pandemic and how EA is bringing new people into gaming. The interview has been edited for length and clarity.

I would say I’ve been lucky and have been prescriptive in my career about working for passion brands and brands that viewers, consumers and players can make an emotional connection with.

An interesting learning for me was that in my experiences leading to this day, the one thing that brings consumers together is passion. And the passion that exists for sports fans and watching their favorite team and sports, versus a soap opera fan watching the drama unfold of their stories, there’s very little imperceptible difference between the reasons why people are passionate about the things they are passionate about. So it’s been exciting thinking about how great characters and great stories really immerse people into stories and franchises. I’ve had a lot of experience working and building  amazing brands, stories and characters and bringing those to the world and driving audience. I also have had great experiences in play, but play at a very foundational level of young kids through my time at Hasbro.

The biggest unlock for me that surprised me was the fundamental motivations in play for kids are really no different from what I see today in the video game industry. There are people that like to be creators, people that love to be immersed in worlds, people that like competitive play, and you see that very early in the way young kids play, and a lot of that motivation doesn't change as they get older, they just experience it in different mediums. And so it’s fun to triangulate the experience and build entertainment and play experiences and then bring that into an interactive environment where it turns into to-way play.

What do you see are the motivations that bring people to gaming?

Gaming connects people, and connects them more deeply to content. Where entertainment is more of a lean-back experience, where you’re watching movies, but it’s not two-way like games are. In games there’s an action and reaction, and your input delivers an output back to you. You can control and personalize and create. But it’s also a digital hangout for people now, where you can connect with friends and other players and share experiences.

That’s only increased since we’ve all separated in the last couple months through quarantine and the pandemic. The connection people are finding has been amplified through the gaming industry. We’ve seen a really sharp acceleration in our business and our industry overall over the last few months.

Especially with someone of the deeper console games that require a lot of time, and people have nothing but time these days, so being able to immerse yours in a game world and connect with friends has been a really nice respite for people looking to escape.

How are the protests changing your approach to marketing?

We’re being very thoughtful about it. One of the brands I oversee is “The Sims,” and one of the best things about “The Sims” is that it’s a game and a platform that stands for inclusivity. It’s been a game that, for its 20-year existence, has built itself upon those values. So one of the things we did was to send a message to our players recently to be very clear that these values are still as important to us as they've ever been and that we’re going to continue to build more inclusivity and representation in that game and more options for people looking to represent the world around them inside that game. So you’ll see us continue to make that a core value and continue to live that value through these times. And we’re looking for ways to have players help us identify blind spots or opportunities so that we can live that promise every day.

Our Black community, for example, has brought forth things over time where for the lack of range for color tones for skin, and in addition they called us out for how some of the makeup choices looked on those skin tones, so that’s part of what led us to do the MAC partnership.

Can you talk a little bit about your goals for your role in the next year? What are the priorities in light of COVID-19 but also long-term?

We have an obligation to meet players where they are. By that I mean meeting them on the platforms in which they play and how they want to play, versus forcing them into a singular experience with a game. Continuing to reach them as broadly as we can is definitely a goal, as is surrounding them with services that connect them with one another, so we really want to  build a global connected gaming community. That means focusing on tools and technology that allow players to find one another easily, to play together, to communicate and share experience, and we have to make it frictionless.

As a brand leader, I’m most interested in expanding the reach and affinity with our brands through both small curated opportunities, as well as the big marketable things that allow us to reach a large swatch of the demographic.

How are you working to bring new people into your games, especially women or other people who historically aren’t the biggest buyers of games?

The addressable audience for gaming is really everyone. There are no walls and everyone can and should have the opportunity to play. We want everyone to feel welcome inside our communities, and there probably is a game for everyone. I think where we see the biggest opportunity for growth and connecting with consumers and building a stronger and deeper player base is in mentoring the next generation of players. We see the compression of the age group of the toy category, adn as someone who just came out of that world, I can tell you that toy play is getting younger and video games are starting to get into the youngest levels of the consumer much earlier. Capturing that generation earlier with safer experiences and bringing them into safe, fun communities is an opportunity for us.

I also think there’s a community of players around the globe that have access to different technologies. It’s generational, it’s geographical, it’s platform-based, as well as through different types of experiences and different stories. Growth comes in many vectors.

Pepsi to Focus on Halftime Show & Activations During Super Bowl