Video streaming demand has grown in 2020 while millions of Americans have been sheltering-in-place due to COVID-19. And they’re buying more streaming services. “I can’t dream up another scenario that would benefit streaming services more than people being in their houses without much to do other than watch TV,” says Valerie Zapata, Hulu’s director of subscriber growth and partnerships. 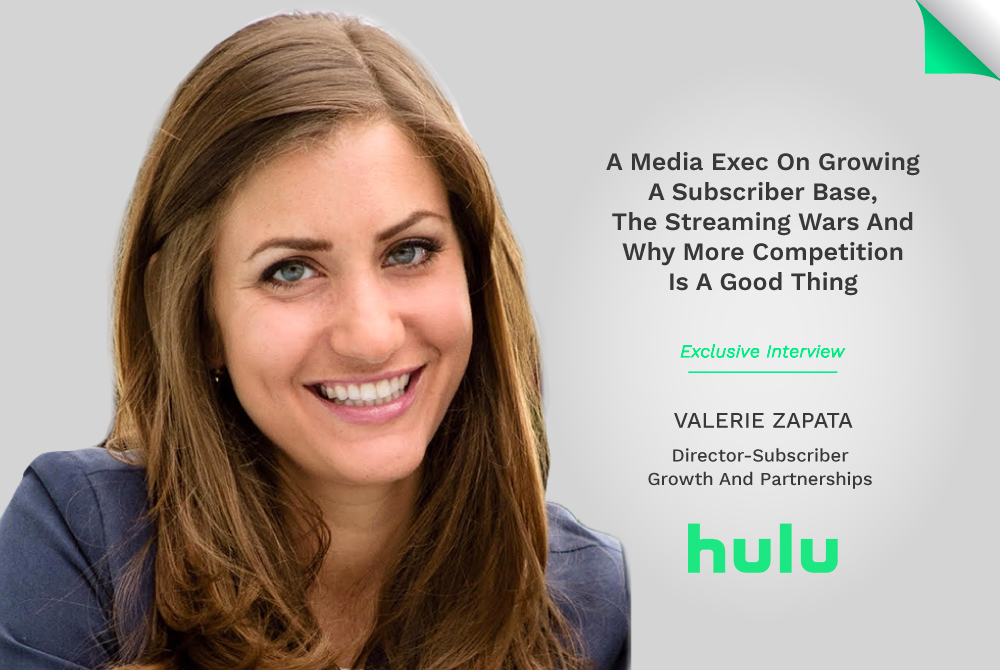 If there’s one business model that’s benefitted from everyone staying home this year, it’s the streaming service.

“I can’t dream up another scenario that would benefit streaming services more than people being in their houses without much to do other than watch TV,” says Valerie Zapata, Hulu’s director of subscriber growth and partnerships.

Indeed, demand has grown in 2020 while millions of Americans have been sheltering-in-place due to COVID-19. And they’re buying more streaming services. The average U.S.consumer now pays for four different streaming services, up from three pre-COVID-19, according to Deloitte’s Digital Media Trends study. And 80% of U.S. consumers now pay for at least one streaming service.

Like other streaming services, Hulu has benefitted from this trend. In its most recent earnings, parent company Disney said that Hulu had 35.5 million paid subscribers, up 27% year over year. Sibling service Disney+, which launched in late 2019, reported 57.5 million.

There’s certainly no shortage of streaming service to choose from. Netflix and Hulu and among the older of the services, but since then there’s been countless entries into the space. In addition to Disney+, there’s Amazon Prime Video, AppleTV+, CBS All Access (which will rebrand as Paramount+ early next year), Sling TV, NBC Universal’s Peacock, the struggling Quibi and the list goes on. But times are also tough economically for many people, so how long they stay subscribers to so many services remains to be seen.

On the originals front, Netflix made a name for itself by creating its own series and shows at a volume that’s hard for anyone -- customers or rival streaming platforms-- to keep up with. But Hulu has been airing more critically acclaimed shows and movies in recent years. Though “The Handmaid’s Tale” was Hulu’s breakout originals hit, the platform has released a number of popular shows more recently, including the Emmy-nominated “Normal People,” “Ramy,” “Mrs. America (via Disney’s FX on Hulu partnership) and “Pen15,” along with acclaimed movies like summer comedy “Palm Springs.”

But Zapata says Hulu doesn't rely on just originals to bring people in the door. “It’s not only originals where we're scaling up the volume while keeping the quality of premium programming; we also have classic favorites and next-day TV. We’ve found most people don’t only want to watch originals or only want to watch broadcast hits.”

Zapata originally got into entertainment because she says she’s always been interested in the industry. But she knew early on the business side was more in her wheelhouse than the storytelling side. “I’ve always been interested in the business side of entertainment and content. I felt a calling towards doing my part towards bringing stories that need to be told to the masses. I've had that passion as long as I can remember. As I developed that in my career, it became clear I’m not the storyteller of those stories but I can very much help grow the audience for those stories.”

Zapata joined Hulu in October 2017 in a pricing and promotions manager role. She’s since worked her way up to her current role as director of subscriber growth and partnerships, where she focuses on both driving subscriptions for its ad-free and ad-supported plans as well as its distribution partnerships. Prior to Hulu, she was director of subscriber growth and partnerships at Helix Sleep, a home-goods ecommerce platform. Earlier in her career she was at HBO, where she started as an executive assistant to HBO’s former EVP of Domestic Network Distribution and Marketing Shelley Brindle, and moved her way up into more senior distribution roles.

Brand Innovators caught up with Zapata from her home in Santa Monica to talk about the competition in the streaming space, how she plans to grow the Hulu subscriber base and why she thinks more players in the streaming space -- both ad-supported and ad-free -- is a good thing. This interview has been edited for length and clarity.

Surely whatever plans you may have had going into 2020 have changed once COVID hit. Can you talk about what you had to pivot in your role? How much did your plans change and how?

One of the silver linings of this otherwise horrible year is that the streaming business is booming. We’ve been one of the few businesses that has experienced unprecedented growth as a side effect of COVID. We’ve experienced incredible subscriber and engagement growth and so much of my job has shifted from thinking about how to create that demand and more to how to take these tailwinds and turn them into sustainable, long-term business benefits. That means thinking about how you build and establish habits and behaviors that are going to lead to happy, healthy subscribers who will stay on the service after COVID.

It also has us thinking about potential changes to business models and what's going on in the market: How is COVID potentially accelerating the decline of traditional TV, and what does that mean for Hulu and our portfolio of products, and where and how can we capture that opportunity? COVID has been an accelerant to structural changes that have been in the making. That’s empowered us to think big-picture and strategically, both in terms of the individual subscriber level but also the broader business level.

With so much competition in streaming, and with so many platforms creating their own originals, what’s your strategy and positioning for standing out to grow subscribers?

Our depth of content is pretty unparalleled. But we’re not trying to give people everything. We find most of our subscribers have other streaming services and even traditional paid TV as well. We want to make sure we have a firm place in the ecosystem and that people start with us.

The other thing is that from a pricing and product strategy perspective, we have more variety in terms of the type of Hulu you can get. We have ad-supported, the ad-free service, the live services, and we’re part of the Disney bundle. So we’re trying to face choice and flexibility.

AT&T recently said it was launching a lower-priced ad-supported tier of WarnerMedia’s HBO Max. Is there room for one more player in the ad-supported space, and are you concerned about additional competition?

I understand the appeal. From a consumer perspective, we really like it because it enables us to have an offering at that cheaper price point. $5.99 is a good deal for what you’re getting from us for the ad-supported product. Building an ad supported service that not only services the consumer needs but also the advertiser needs in a way that enables you to monetize them and do it in a way that isn’t completely disruptive and off-putting to the customer is really hard to build. We’ve had the advantage of building over the past decade and that’s where we see a ton of growth in the business.

Your title includes partnerships. What have some of your most impactful partnerships been in this role, and what did they entail?

The partnerships my team are responsible for are the wholesale and device partners, so it’s really around distribution partnerships. Wholesale partners are ones like Spotify, where we have  ongoing offerings where you can get Hulu with a Spotify student premium plan. We also had the recent Verizon-Disney+ bundle announcement. Those wholesale types of partnerships give us a ton of growth but let us do it in a way where we can penetrate new audiences. The Spotify one is a perfect example. Hulu has  historically under-indexed with college students. And Spotify had already developed really good awareness and intent in that group, so by bundling in with them, we were able to make sure we were getting our brand front and center

The other category is our device partners: Apple, Roku, Samsung, any device on which you can sign up for and watch Hulu. And for us that’s as close as we get to point-of-sale. We talked before about winning those decision moments of when you're choosing what  service to buy and when you’re choosing what to watch. We partner closely to make sure we’re keeping Hulu and our content front and center at those decision points.

Earlier in your career you began at HBO as an executive assistant of the EVP overseeing distribution. What got you interested in entertainment and distribution?

That was a formative experience for me. I interned at HBO in undergrad and I worked in the publicity department. I loved HBO and this environment, but by nature I’m an analytical and strategic person. So it became about finding where I can find a function that harnesses and leverages those skills. I spent a long time trying to get my foot in the door at HBO fulltime and interviewed for a ton of executive assistant positions for a long time. I had consulting experience, but I didn’t have real entertainment and media experience.

I must have interviewed for 7 or 8 EA jobs. Every person said I was overqualified and asked why I would want to be an executive assistant. My answer was always that I wanted to get my foot in the door. Then I crossed paths with Shelley Brindle, who had just been promoted to EVP of distribution. I like to call it professional love at first sight. By serendipity I landed in a function that very much suited my strengths and skill set and curiosity. I spent a year at her side where not only did I get a bird's eye view of the business, she led HBO’s domestic distribution at the time when they launched HBO Go. I got to see her manage that transition and learn from her leadership style. I just tried to absorb as much as possible. That very much set me on this track toward roles in growth and the function of growth.

There are a couple. “Handmaid’s Tale” is great and for me it calls on my passion to make sure the right stories are getting told and noticed. I also really enjoy “Palm Springs.” Because it has “Groundhog Day” notes in it and is about getting stuck in a time loop, it feels current with how we all feel right now, but in an optimistic and lighthearted way.