Innovator Insights: Zynga’s Gabrielle Heyman On Making The Most Of The Mobile Gaming Opportunity

The year 2021 has been filled with almost as much uncertainty as 2020, but Zynga’s Gabrielle Heyman has no doubts about the future of mobile advertising. 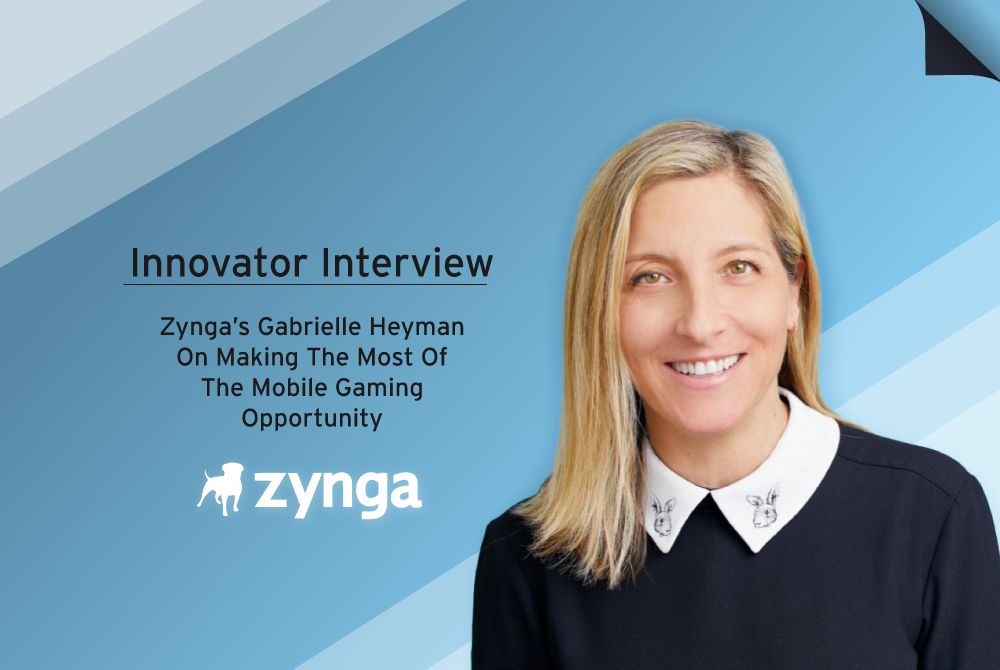 The year 2021 has been filled with almost as much uncertainty as 2020, but Zynga’s Gabrielle Heyman has no doubts about the future of mobile advertising.

About six months ago Zynga -- best known for titles such as Words With Friends, Farmville and many others -- released a study that showed 71% of mobile gamers feel in-game ads are just as (or more interesting than) the ads they have seen on TV. A majority of 67% also said they appreciate receiving in-game rewards in exchange for watching an ad.

According to Heyman, who serves as Zynga’s head of Global Ad Sales, the company made sure world events didn’t affect the underlying truth it uncovered in its research.

‘We fielded that survey three times,” Heyman told Brand Innovators. “It was originally conducted in March 2020, before the pandemic. Then we said, ‘Okay, now everything’s changed.’ But we ran it again, and then again. Those metrics didn’t change.”

This could help explain why, as more people embraced a digital-first lifestyle amid the pandemic, Heyman has been in more conversations with brands about the potential of mobile gaming than ever before.

While in other channels ads might be seen as an interruption, Heyman said aligning creative next to a mobile game creates a unique halo effect that brands shouldn’t underestimate.

“You’re playing to win — either competing against someone else or against your last highest score,” she says. “The very function of game mechanics means it’s a more immersive experience. So when an advertiser can get to a gamer, they are making a friend for life.”

Heyman said some brands continue to advertise in mobile games to achieve reach into coveted demographics, while others focus more on performance and conversions. Some do both, such as a streaming service that uses mobile games to raise awareness about an upcoming movie, and runs a campaign to get them watching it.

Here are some of Heyman’s other words of advice for making the most of advertising in mobile games:

“Never have I seen a more persistent stereotype than the idea that (the average player) is a male, playing in the basement, who’s 20 years old,” Heyman said, adding she came up against the same misconceptions in previous roles many years ago. “It was women then too. The majority of gaming actually skews female — it’s a Millennial mom.”

There is also evidence to suggest the next generation of gamers will be ever more engaged with content from brands like Zynga. Heyman pointed to the 15th annual Digital Media Trends survey from consulting firm Deloitte, which showed that playing video games was the No. 1 activity among Gen Z, even over listening to music or browsing the Internet.

“There’s still 45% of men playing, but we definitely still have to educate marketers about audiences,” she said. “The truth is you can find every audience in a game.”

Consider The Tools You Use To Measure ROI

With more brands bringing some aspects of their programmatic buying and even creative production in-house, Heyman says Zynga continues to value its agency partners but can sometimes forge large strategic deals by working with clients directly.

A client-direct relationship can also open up a deeper conversation about metrics and the technologies brands and agencies have to evaluate the success of their marketing through mobile games.

“One of the challenges in apps is that the adtech that brands use wasn’t really built for that. It was built for advertising on a desktop,” she points out. “When you can speak to a client directly you can talk about the true audience makeup. Even to demonstrate viewability, the platforms are improving but honestly, if you play our games you’ll see that the ads are 100% viewable.”

“Mobile games are the best kept secret in terms of video ads,” Heyman says. “If you think about it, when you watch a lot of on-demand content, you’ll see six ads. When you play games, you’re often the only ad in the pod.”

Brands that move into video ads on mobile games should consider length, Heyman added. While many marketers have grown accustomed to the shift from 30-second TV spots to 15-second ads on channels like YouTube, she suggested they lean in to six-second septs for mobile games.

Heyman also predicts a lot more investment in 360-degree promotions, pointing to the long lineups for players to purchase console games like Call of Duty. Mobile gaming is ripe for more sophisticated activations.

“You're going to see more ‘event-izing’ of games on mobile,” she said. “There’s going to be more opportunity for our brands to be really big launch partner and do things not only in the game, but around the game, that are going to be worthy of press coverage.”