First, there was the move from black-and-white television to color. Then came the shift from desktop PCs to mobile devices. Now, Jason Yim suggests marketers should prepare to embrace an equally pivotal moment: the transition from 2D to 3D and the rise of extended and mixed reality as a way to deeply engage consumers with the most immersive content imaginable. 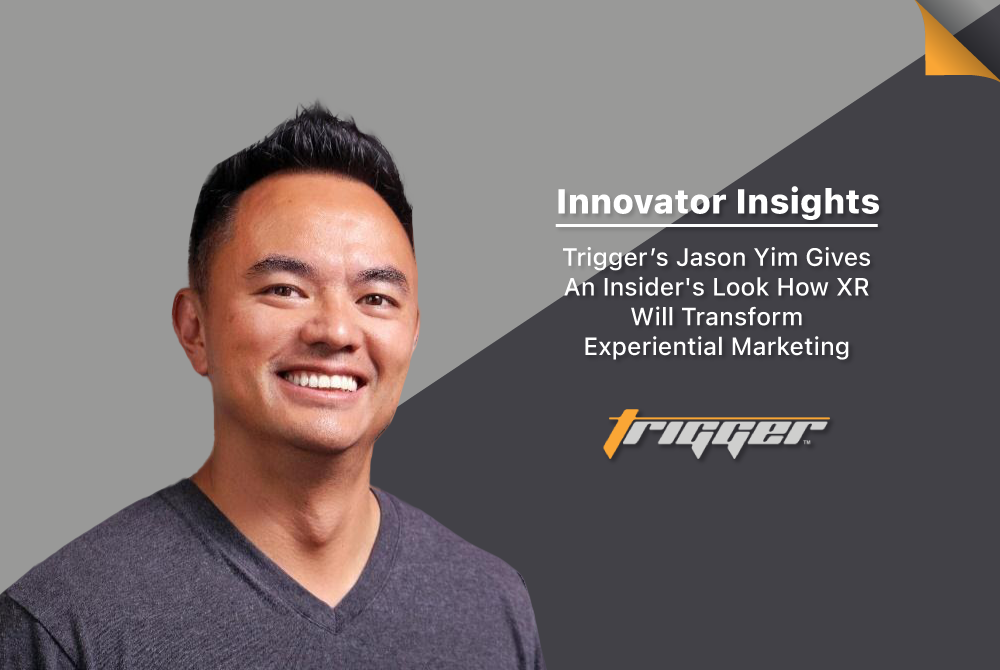 First, there was the move from black-and-white television to color. Then came the shift from desktop PCs to mobile devices. Now, Jason Yim suggests marketers should prepare to embrace an equally pivotal moment: the transition from 2D to 3D and the rise of extended and mixed reality as a way to deeply engage consumers with the most immersive content imaginable.

As the executive creative director and CEO of Los Angeles-based XR Agency, Trigger, Yim and his team help brands not only understand the opportunity presented by extended and mixed reality (XR), but also how to use the technology to achieve a wide variety of marketing objectives.

Yim defined XR as everything between virtual reality (VR) and augmented reality (AR) to create uniquely innovative experiences. Trigger’s credibility in the space comes not only from the talent it employs but its track record. The company has been active in the space since 2009, working with clients such as Disney, Verizon, Molson Coors, and LEGO, and has since deployed more than 250 XR projects, building over 250,000 development hours of experience.

A lot of marketers might be familiar with VR based technology because of its use in the gaming world, while AR is often associated with the filters used in Instagram, Facebook, and Snapshat Stories. Trigger’s work in XR goes beyond those approaches by also using technologies such as Web AR (which use a browser rather than forcing consumers to download an app) that help break down barriers of entry.

“Part of the power of XR is that it’s proven to be effective both up and down the funnel,” Yim told Brand Innovators. “You can have something experiential to engage the user, build up affinity and then offer a robust XR shopping experience to help them get to the right product or color options and then convert them into purchasers.”

Examples of top-of-the-funnel awareness include a Web AR experience Trigger created to support the release of Jumanji: The Next Level, where consumers could use voice activation to visit surreal locations from the movie and access exclusive content. Yim said the average session time was five minutes or more.

At the lower end of the funnel was Trigger’s work with Nissan and Lucasfilm, where an app-based AR experience allowed Star Wars characters to explain the safety features of a car. Yim said there was a 70% information retention rate for those who tried it. “That’s a lot better than just giving someone a brochure,” he pointed out.

Sometimes XR projects are funded through a brand’s innovation team, Yim said. In other cases marketing teams approach Trigger because they’ve seen XR used in a competitor’s campaign and they want to execute something of their own.

“We’re starting to see where XR is becoming an expected part of the digital spend --  where they are placing it next to a budget they’ve set for social, or the web,” he said.

Here are some of Yim’s other rules of thumb for successful marketing with XR:

Offer The Eye Candy, But Think Of The Sweet Results You Can Achieve

Brands like Ikea have already shown how technologies like AR can be used to help consumers imagine what furniture will look like in their homes. While the initial novelty may get people’s attention, Yim advised marketers to think through all the other possible goals they can achieve through XR experiences.

He cited a Trigger project for Häagen-Dazs’ 60th anniversary, for instance, which allowed consumers to scan codes on product and signage to virtually the original ice cream shop in AR and then enter a sweepstakes contest, leading to a conversation rate of over 90%.

For retail brands, Jason cited Shopify’s 2X conversion numbers compared to traditional imagery and  Macy’s example of VR-based shopping that led to a significant increase in cart size, Yim said. “And it can also mean lower return rates — 2% versus what is normally double digits,” he said.

If there had to be a single moment that XR had “arrived,” it might have been the 2016 introduction of Pokemon Go, which started a craze of people using an app to overcome challenges to find virtual creatures in the physical world.

Trigger, now a Lightship partner of Niantic, the creators of Pokemon Go, are looking forward to using their core technology to inspire brands to reshape how they approach everything from advertising to e-commerce. Rather than limiting themselves to the list-based format of most shopping sites, for example, he said the future could be more of a “multiplayer” environment, where friends help select items, offer advice or commentary and earn rewards.

“3D is just so fundamentally different than 2D, and once you’ve tried on clothes virtually anything else is going to feel lesser,” he said. “You need to start thinking about how you can replicate some of the merchandizing, the promotions and build more of an experiential way to shop.”

Put Your Thinking Cap On As Head-Mounted Displays Emerge

Not every XR experience will require strapping on a bulky helmet. Yim pointed to brands like Apple, which was recently granted a patent for a head-mounted display (HMD) that many believe will be used to create glasses with VR and AR capabilities built in.

Yim described scenarios where consumers could put on HMDs at home and, using depth sensors and other technologies, have their living room transformed into a retailer’s store experience, complete with products on display. XR could even extend the physical space of the room, where consumers could have a model walk out of a virtual dressing room to show off outfits, for example.

“This is going to change how we all interface with the world around us,” he said. “Brands should be ahead of that curve.”