Jodi Senese, OUTFRONT Media’s CMO, talks purpose, giving back and showing up as a brand. 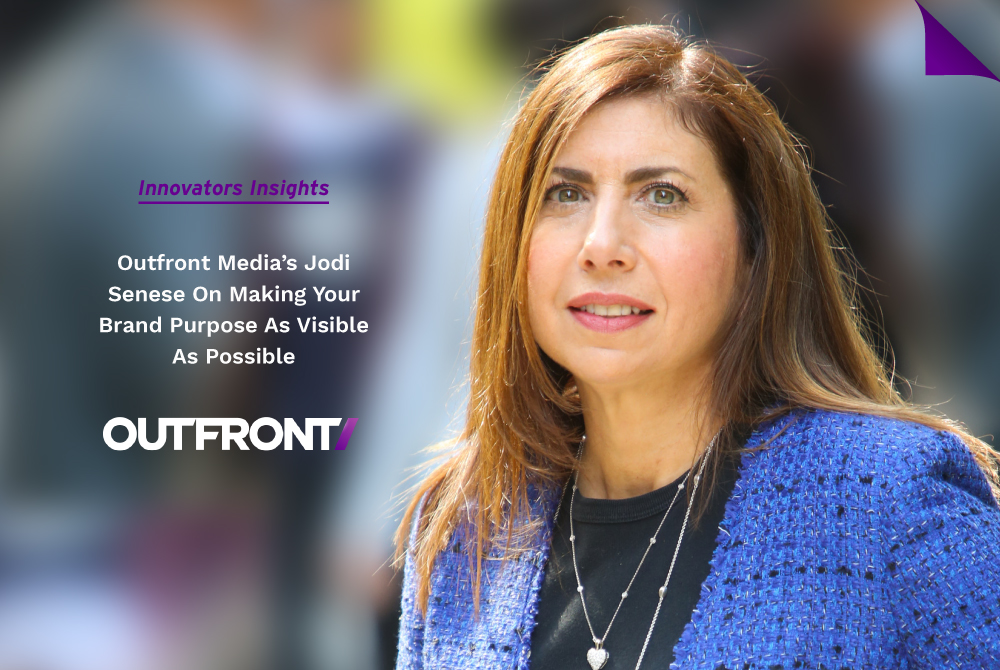 There has been plenty to complain about since the pandemic began, but four-year-old Larissa continues to feel grateful for chicken nuggets, candy, and juice.

Meanwhile, three-year-old Belle’s tough times were mitigated by “Daddy, muffins, and frogs.” According to an eleven-year-old named Reese, there was a certainty that ‘things will get better, no matter what.”

These sentiments were all part of a campaign this past Fall, simply dubbed “#Thankful,” in which OUTFRONT Media employees and partners culled sentiments from their children to celebrate the Thanksgiving season. After receiving more than 275 messages, the results were put on billboards in the children’s home towns.

For Jodi Senese, OUTFRONT Media’s CMO, it was just one example of how the company has been living out its purpose, which is to help people, places, and business grow stronger.

“We think about it through three different lenses,” Senese told Brand Innovators. “For a sense of purpose to really resonate it has to be lived both internally and externally. So when we talk about people we mean both our employees, our customers, and their customers. Places include where we live and also the transit systems we use to get around them. And business reflects growing our clients’ businesses, both the large and the small.”

That focus helped OUTFRONT get named as one of America’s Most Responsible Companies by Newsweek, but for Senese the true test is how well OUTFRONT demonstrates the power of out of home media to make a tangible difference in the world.

A good example was a partnership between OUTFRONT, the Out of Home Advertising Association of America and the CDC to create a series of health PSAs that raised the visibility around staying at home and hand-washing. Senese said the content was produced by OUTFRONT’s in-house creative agency, OUTFRONT STUDIOS.

“Most organizations understand the power of out of home assets, but that was a very physical manifestation of it that was spread across the U.S.,” she said. “It wasn’t so much about our brand, but highlighting the power of the entire out of home industry.”

Senese offered some other ideas on how to act as a purpose-driven brand based on some examples of what she’s done at OUTFRONT:

Consider How Giving Back Will Change The Conversation With Customers

Last June, as local businesses began reopening in various states across the country, OUTFRONT began offering static and digital billboard space at no to low cost in various markets as part of their #GrowStronger small business stimulus program.

The initiative helped more than 300 businesses with creative messaging that could be tailored by location. Consumers obviously benefited from having a better sense of where they could go for products and services and the safety protocols that had been put in place, but Senese said it also allowed OUTFRONT to approach its customers in a way that they might not have expected.

“For our sales team, it meant the ability to call a local business and not try to sell something,” she said. ‘Instead, they were able to provide aid to a business in distress, offering an opportunity to get customers safely back in the door.”

Plenty of brands dutifully posted a black tile on Instagram or created posts in support of Black Lives Matter, but OUTFRONT tried to make sure it offered something that would reinforce the idea that anti-racism is an ongoing discussion.

In its Black Heart campaign, for instance, OUTFRONT showcased a series of heart images, all consistent in design, but featuring different words of importance, all designed by OUTFRONT STUDIOS’ artists. More recently for Black History Month, OUTFRONT ran a "Making Black History with…” campaign in 35 markets to celebrate and honor those individuals who are making history now.

What people don’t see, however, is the work Senese and her team are doing to engage its employee base around such issues, with internal events that featured guest speakers such as Michael Dyson and Kobi Little.

“Brands had a choice to show up deeply or show up with some window dressing,” Senese said. “You have to make a commitment to employees that movements like Black Lives Matter are really going to be part of your organization.”

In March, OUTFRONT displayed their Women’s ‘HERstory’ Month campaign, which launched on International Women’s Day and utilized the paper doll aesthetic as a symbol of stereotypes being broken by modernizing the style of the illustrations. The dolls showcase the wide range of attributes that make up women, from different careers and hobbies​​ to aspirations, to different ethnicity and sexual orientation. The campaign recognizes that every woman has her own story to tell. As a complement to the campaign, OUTFRONT encouraged all to download and print their very own paper dolls.

After a ‘glass-breaking’ year, it is clear that women do it all and gender is no limitation to what is possible in one’s career or personal life. The creative was designed by a collaborative group of women within OUTFRONT, including female members of the creative team at OUTFRONT STUDIOS, and OUTFRONT’s Women Employee Resource Group, which provides support and resources for female employees.

Don’t Overlook The Opportunity To Inspire As Well As Inform

After months in quarantine, talk of “digital fatigue is everywhere, with people ready to venture out and begin enjoying the outdoors again. Senese recommends brands make the most of it, keeping in mind that there’s a difference between a tiny smartphone screen and a display that can bring value to the customer experience.

While a billboard could offer everything from directions to emergency weather alerts, she said brands should think about how they can inspire consumers with how they’re translating their purpose into new ways to reconnect as the pandemic is contained.

The rise of QR code usage during the pandemic, meanwhile, is transforming opportunities for established brands and upcoming DTCs alike who want to let consumers scan their device on street level OOH assets.

“Out of home is the most Instagrammable media format,” she said. “You have connectivity between URL and IRL, and that’s going to be huge as people start to get out and about more, and want to share what they see and experience.”