Patrick Sullivan, senior vice-president of creative at Imre, talks about approaching consumers with empathy and sharing and celebrating your true brand. 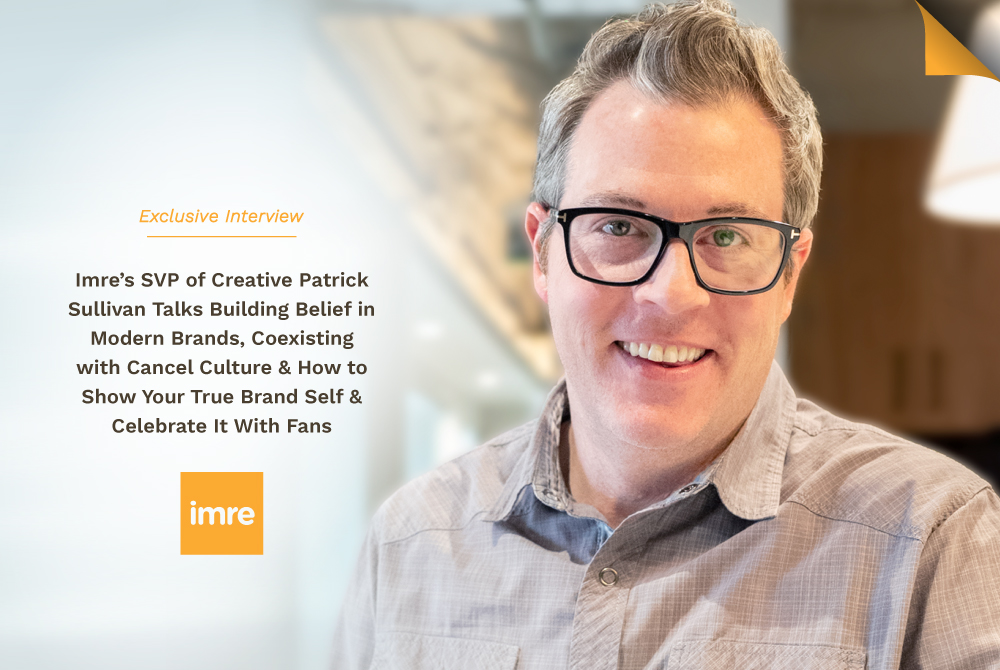 Plenty of people sit back and laugh at the “cold open” or first segment on Saturday Night Live, but Patrick Sullivan recently found himself watching one that resonated more deeply than he might have anticipated.

The segment involved a mock talk show called “What Still Works,” where a host and her guests explore the state of the stock market, politicians and social media.

It soon became clear that, essentially, nothing still works, but the senior vice-president of creative at Baltimore, MD-based Imre saw it as more than just a joke.

“Honestly, that skit could have gone on for hours and hours,” Sullivan told Brand Innovators. “We’re all on this ride where every time you turn on CNN, it blows your mind.”

Imre is focused on helping marketers confront the fear, paranoia and skepticism consumers are dealing with by nurturing what the agency calls ‘modern brand belief.’ This is the notion that, beyond simply buying a company’s products, consumers develop such an affinity that they become willing to “go to bat” for their favorite brands.

Modern brand belief can manifest itself in many different ways, Sullivan suggested, from getting a John Deere logo tattooed on your arm to naming your puppy after a company. This doesn’t mean trying to create an image of a brand with a perfect veneer, however.

“Brands are just like human beings — they have quirks, they have personalities, and at the core it's not just what they say but how they act that matters. That’s what defines who they will be in the eyes of the consumer,” Sullivan said. “Your heart will instantly recognize it as a human being when a brand is putting their truth out there.”

Sullivan provided some additional context around modern brand belief and how marketers could take a more active role in shaping it.

Imre is able to study how “believable” a brand is by using 46 different characteristics that suggest its ability to build equity in the minds of consumers. Some of the most common indicators include integrity, compassion and trust, Sullivan said.

While some marketers might feel uncertain about being vocal about their purpose amid ongoing negative headlines, Sullivan suggested recent events have created a void brands could help fill.

“Brand belief is based in the human experience, and the shared human experience we’re all having now is the pandemic and isolation,” he said. “People are looking at institutional disarray, political smoke screening, market manipulation — this is truly the post-truth area. They’re asking, is there anything left to believe in?”

Learn To Coexist With Cancel Culture

The flip side of modern brand belief is that consumers can react negatively in ways that are difficult to recover from.Yes, social media commentators may seem to be more critical than ever right now. Sullivan suggests CMOs should get used to it, because it’s not going away.

In fact, what becomes viral online suggests algorithms are rewarding certain types of behavior, including having a strong point of view. Instead of trying to hide or avoid being cancelled, Sullivan suggested marketers embrace their authenticity as an antidote of sorts.

“What the CMOs of the world need to understand is that once your brand is in that digital space — which they all are — that you don’t own that brand anymore. Culture does,” he said. “All brands are, in a sense, being democratized and co-owned by their audience.Those that don’t embrace that openness, or which act inappropriately, are instantly recognized by the digital audience in a much different way than we saw with more traditional advertising.”

Show Your True Self — And Celebrate It With Your Fans

Imre’s client roster includes performance workwear brand Dickies. In late 2019, the company launched a campaign called Yours To Make, which eschewed paid actors and elaborate staging to showcase the pride of actual artists and makers wearing its clothes.   Putting customers in the spotlight is a great way to experience the power of modern brand belief, Sullivan said.

“It’s not just a matter of asking yourself  ‘What is your brand truth?’” he said. “You also need to ask, can you embrace it in a way that brings your audience in? Are they invited to play with your idea, or join your mission? Naturally, it's about having a conversation with them rather than talking at them.”