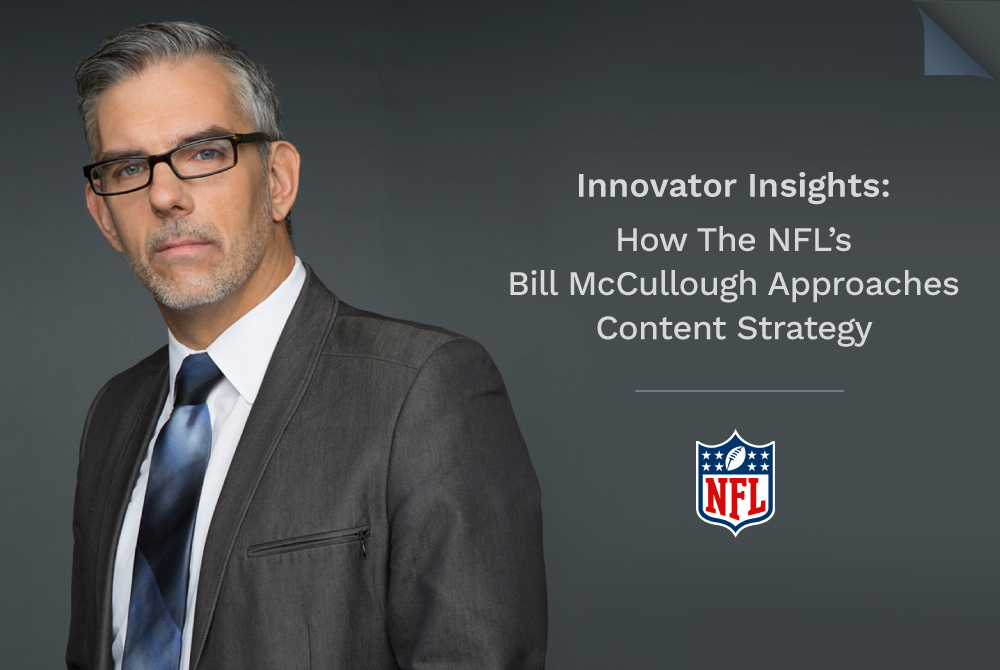 Bill McCullough, head of content for the National Football League, knows all too well that he must plan for a variety of outcomes for the next NFL season.

Though the fate of the NFL’s next season is yet to be determined, other professional sports leagues have suspended or canceled their spring seasons due to COVID-19. Earlier this month, the NFL league optimistically released its Fall 2020 season will begin with a September 10 season opener between Super Bowl Champions the Kansas City Chiefs and the Houston Texans.

But that doesn’t mean the season will happen, and if it does, it could mean that teams play to empty arenas. However the season shakes out, McCullough and his team are developing content strategies that will help keep fans engaged, both on a national level and on more regional and local levels through each team’s content.

During the coronavirus crisis, the NFL has turned to its vast archives to create stories about teams and players to keep fans engaged.They also took advantage of simple production techniques like filming athletes over video to add current angles to their content.

The league recently launched a video series, “NFL At Home,'' that uses both archival footage and new interviews of NFL players in their homes. “It’s a great example of how we’re marrying the current situation with being able to tell stories using archival footage.”

McCullough is a longtime creative and content strategist. He got his start at shopping channel QVC before becoming an editor at HBO in the late 90s, editing “Inside the NFL,” “Real Sports with Bryant Gumbel” and “The Chris Rock Show.” He then opened his own production company, Wonderland Studios, where he produced branded content for brands like McDonald’s and Pepsi, as well as network series from ESPN, PBS, Spike TV and documentaries for channels like HBO. He then went back to HBO as VP of creative development and operations, where he oversaw the creative direction and brand management of HBO’s sports franchises, before moving to Go Pro as executive producer and head of content.

He’s been at the NFL since 2017, first in a creative director role, and now as the league’s head of content, where he oversees all content and distribution strategy, develops the creative pipeline for external content creators and works with the league’s teams to evolve and develop their content and production capabilities.

McCullough spoke at a recent Brand Innovators Livecast about entertainment marketing, where he discussed his career path and shared advice and tips on the best ways to approach content strategy, even as the future of entertainment may be uncertain.

Below are four key takeaways from McCullough’s Livecast To rewatch his livecast, go here and register.

In entertainment, things don’t get made without funding, and funding doesn’t happen unless there is a monetization strategy in place. McCullough said that he’s learned in his career that it was key to go back to the roots of a project to understand its strategy, how it was developed and what its monetization path was.

“You can have the best idea in the world, but if there’s no funding or distribution component to it, it doesn’t get made,” said McCullough.

He noted that during his time at HBO and at GoPro, he learned more about the entire development process, as opposed to the production aspect, which was his area of expertise until then. Working in production with Wonderland, he was mostly exposed to the tail end of development, meaning he worked on projects that were already greenlighted.

It’s critical to develop a very clear strategy from the beginning, including monetization, otherwise projects will not see the light of day, he said. “The further back in the process you go in development, the more of a plan you have to have, and you have to figure out how you're going to monetize,” he said. “For me, GoPro was a masters in digital media and strategy. Yeah, we can make content, but [we always asked ourselves], what is it for? What is the purpose?”

He’s taken these experiences and applied them to his NFL job. “At the NFL, it’s all about trying to create content we can monetize. The challenge isn’t just creating content, it's creating content that’s valuable.”

“The conversations [we have] now are looking at how the content strategy maps back to business strategy. If you can monetize and align those things, that’s your best chance at getting something made.”

Make your approach an idea-first one, not a platform-first one

Too many people take the approach of creating content because they want it to appear on a specific platform -- say, Twitch, Twitter or Instagram -- rather than creating the idea and then deciding what platforms it can work on. This causes some brands to create suboptimal content, and they risk looking inauthentic. McCullough said it’s best to first figure out the stories and then look at the platforms as a distribution strategy. “This will inform how your story ideas play out on each platform in an authentic way,” he said.

McCullough says his team has relationships with each platform they distribute on, working with them constantly to understand their audiences and best practices.

“Rather than looking at particular platforms first, we develop content and look at these as distribution points. It’s an audience-first approach.” He added that sometimes he and his team won’t create content for a platform because that audience doesn't want it. “It’s all about consumption and behavior on those platforms. It just has to start with the audience and what they like.”

Use your distribution strategy to speak to different audiences

McCullough says that although the NFL has 189 million fans worldwide, there are discrete groups of people within that audience and they all consume the NFL differently. Some watch games live for hours on end, and some don’t. Younger audiences are more likely to take in snippets of games and supplemental content than older audiences are. Understanding these audiences and how they take in their media is critical to reaching them.

“When we look at consumption patterns and behavior of this audience, that’s where the direction comes from,” he said. For example, he said that his son may watch NFL content on Snapchat or YouTube, while he watches it live on TV. Although they weren’t watching the same broadcast on the same devices, they could still have a conversation about the same game.

“For us, we need to be present on these platforms in an authentic way that reaches these younger fans,” he said.

McCullough added that because of the NFL’s relationship with Amazon, which owns Twitch, the NFL is distributing games on Twitch, giving the league a huge opportunity to reach younger audiences than traditional TV broadcasts offer.  But, he said, programming outside the live games can also be a bit more challenging. The core NFL audience and platform is about the “Xs and Os,” and that audience is looking for depth and focus on football and the games, whereas ESPN, for example, has multiple sports it covers.

One of the keys for brands to understand their audiences is not just about understanding that younger people consume content online more than older people. It’s understanding the kind of content they consume, and how the content itself has changed because of new distribution means.

The NFL broadcasts have always been somewhat at a distance, with players wearing helmets and protective gear, which means viewers have less opportunity to see players and their faces during games. “The ability to create helmets-off content is an inherent challenge due to the nature of the sport,” he said.

But younger audiences are interested in individual players more than ever before. “The younger demographic is starting to be a player-first fan” and they're becoming loyal to individual players, he said. Back in the day, if a player switched teams, you’re not a fan of that person anymore, he said. But now if a player switches teams, younger viewers are following that player to their new team more. This has been facilitated by younger players growing up with a different mentality than previous generations. They have social channels and create their own content. “They are their own brands and distribution channels,” he said.

“All these things combined start to paint a picture of how we can reach younger fans and make a connection through other ways rather than just on the field….The NFL was always very team first, and it still is, but now there’s more of a connection with individual players.”