About five years ago, when he was considering taking on his current role as president and CEO of GSTV, Sean McCaffrey decided to take a bit of a road trip. A very comprehensive road trip. 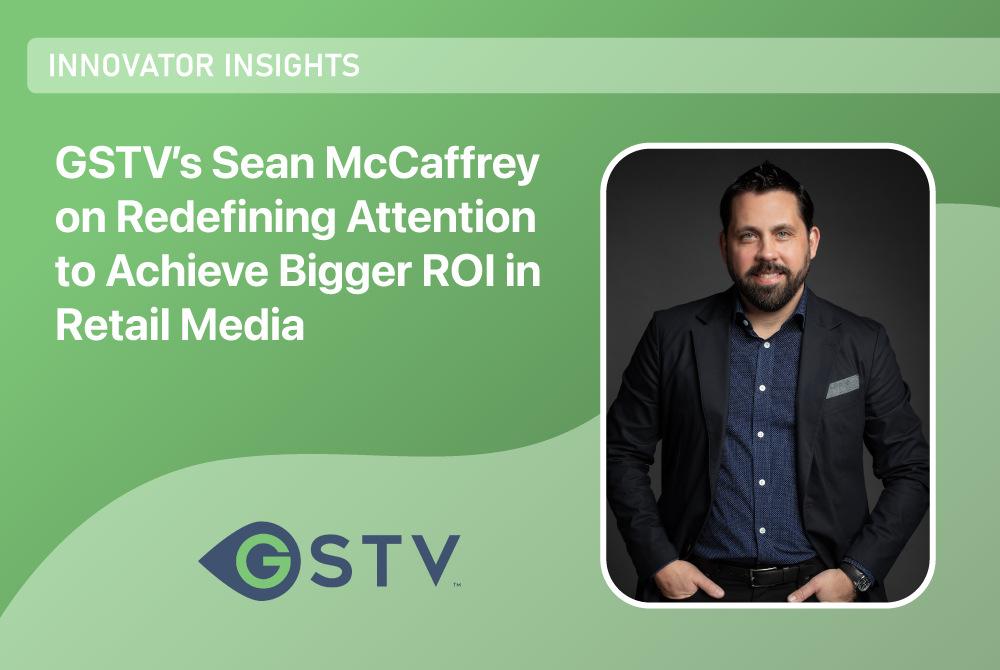 About five years ago, when he was considering taking on his current role as president and CEO of GSTV, Sean McCaffrey decided to take a bit of a road trip. A very comprehensive road trip.

His mission was to visit as many fueling stations featuring GSTV in the New York area as possible and simply watch – not GSTV’s programming, but the people at the pumps. Were they watching? After stopping at more than 100 places, McCaffrey concluded that GSTV was highly successful at capturing consumers’ attention.

“I think attention is the surrogate for action,” McCaffrey told Brand Innovators. “If you're getting attention, it means someone actually cares. Someone's actually engaged and they're open and receptive to taking action.”

As a video network that sits at fuel and convenience stations, for instance, GSTV is in an obvious position to influence sales in that channel, which McCaffrey said accounts for 3% of US GDP today. However the company has also conducted research that shows the three biggest consumer journeys people take after they fuel up are to grocery stores, big box retailers and quick service restaurants.

That means GSTV can also help inspire what happens once those shopping expeditions are under way by helping marketers use their first party data (and those of their partners) in a more intelligent way.

“Retail media has quickly gone from a product to a practice,” he said. “It's really about taking digital investment – and not just shopper investment, but all digital investment -- and thinking about how it can connect in a straighter line to sales.”

This past March, GSTV made a bigger step towards helping those marketers through the launch of Amplify, a retail media network designed to provide a full service advertising solution to the consumer packaged goods (CPG) category. It’s one part of a larger strategy to demonstrate how GSTV can differentiate itself from – and amplify – traditional broadcasters or a social video platforms.

“We know a consumer is there because there's a credit card transaction literally tied to their ad impression,” he said. “So we know the ads run to completion. We know it's a living, breathing, human being.”

A channel like GSTV seems like a natural for brand categories like QSR, and it is. But McCaffrey suggested marketers also bear in mind that consumers aren’t always considering impulse purchases when they’re running an errand like fuelling their vehicle. In fact, since they aren’t sitting on a couch being distracted by social media and notifications on their smartphone, they might be ready to turn their decision to more expensive, premium products too.

“Since it's a week-in, week-out conversation with a consumer, you can market these more considered, larger purchases like a credit card or a mortgage,” he said. “You have an opportunity to build the brand promise and tell the brand story over time. So when someone decides to finally start shopping for a vehicle or a home or a mortgage, you’ve built a relationship with them again at a very contextual time and moment.”

GSTV has an in-house creative and content studio called Ignite that helps create some homegrown content and also operates as a consultancy or a creative shop as needed. That doesn’t mean every brand needs to use it to create custom ads, but McCaffrey said it has given his organization some insight into what works and what doesn’t.

One key principle, for example, is simplifying the ability to take action, such as moving from asking people to send a text message to explore an offer to letting them scan a QR code. Some brands have recognized how music and driving have gone hand-in-hand, and have used GSTV to promote a playlist they’ve developed in partnership with a streaming platform. This is also a medium where being clear and upfront in your storytelling is essential – another nod to the power of capturing attention.

“You have a captive, attentive consumer, you want to keep them entertained and engaged. So cut to the chase right away,” he said. “If it's for a soda brand on a hot summer day, show that glistening, dripping icy bottle of soda and suggest somebody buy one.”