Brands may have their logos plastered over every inch of a sports stadium. Marketers might pay to have their brand’s name precede the title of a concert or music festival. A CMO can have ads running before, during and after an event. 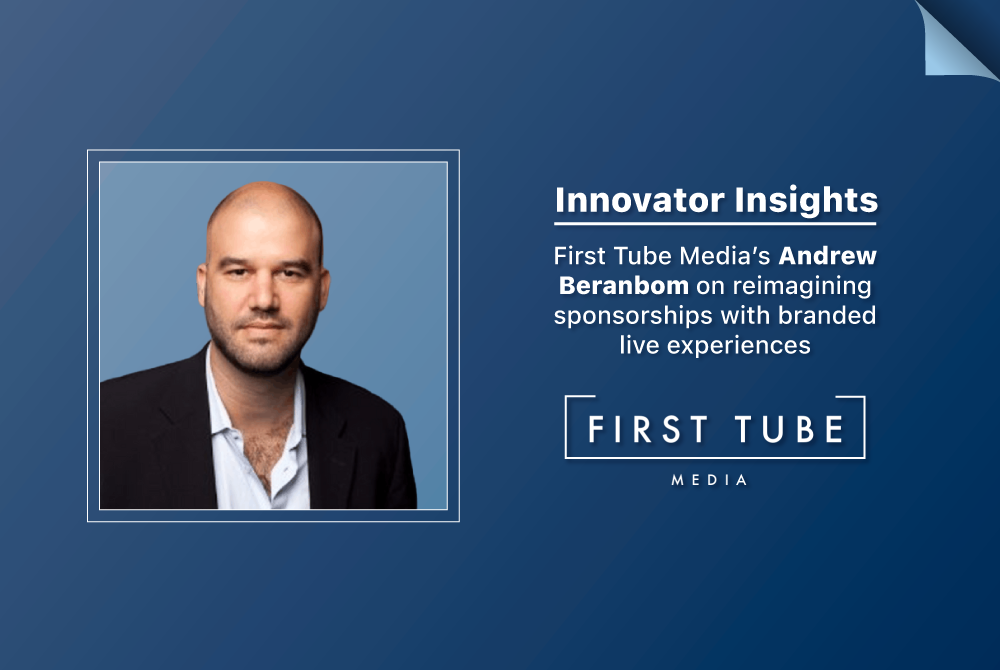 Brands may have their logos plastered over every inch of a sports stadium. Marketers might pay to have their brand’s name precede the title of a concert or music festival. A CMO can have ads running before, during and after an event.

Even then, however, Andrew Beranbom would like to suggest brands haven’t necessarily maximized the opportunity that a reimagined form of sponsorship could present to them.

As the founder and CEO of First Tube Media, Beranbom is focusing on helping brands to create and take advantage of what he calls “tune-in” moments. He defines these as simply content that’s worthy of grabbing consumers’ attention and keeping them engaged. They are live experiences, but also increasingly digital ones as well.

First Tube Media’s platform is designed to help make branded tune-in moments happen by allowing brands to partner with content creators through its marketplace. The content that is developed can be distributed through influencers, across a brand’s own channels, or both. First Tube Media also helps amplify the content through a premium publisher network and paid media. The firm’s analytics tools ensure ROI is captured.

“We created this company almost six years ago now, and we made a bunch of different bets on how the market was going to evolve,” Beranbom told Brand Innovators. “We did not expect the pandemic to be a cause of our acceleration, but what it has meant is that consumer behavior has gone through a massive evolution, where social and digital is now an essential part of the fabric of a live experience.”

First Tube Media has grown more than 600 per cent since 2019, according to Beranbom. Beyond the market forces that have played in its favor, he said he and his team spend considerable time educating the market about the value of a well-executed hybrid live experience and what the best practices are. This includes a new perspective on the nature of sponsorship.

“Historically brands would attach themselves to a live event as a sponsor — for the NFL, for example, you’d see 10, 12 different brands there at least,” he said. “We saw this opportunity for brands to start owning versus being attached to an event. When they do that they get more value in terms of authority, measurability and first-party data collection.”

A case in point is GrubHub, which worked with First Tube Media to launch a branded livestream program called Sound Bites two years ago which not only includes music but live Q&As, private virtual meet-and-greets with artists and other benefits for GrubHub members. Already, GrubHub has seen more than 207,000 orders come through its platform as a result of Sound Bites.

Beranbom had some rules of thumb for making the most of an owned experience versus a traditional sponsorship investment:

Show Up Where The Audience Is, But Then Entice Then To Follow You

Beranbom isn’t suggesting brands ignore classic sponsorship opportunities such as the Super Bowl of the PGA. He simply suggested that brands could run their own live experiences that coincide with those sorts of moments, which bring additional value to the audience that’s a part of them.

This can include occasions such as New Year’s Eve, where First Tube Media helped Anheuser-Busch create a livestream show, The Bud Light Seltzer Sessions, which put together performances from chart-topping musical acts across four different cities. The benefits in terms of reach and engagement went well beyond Jan. 1, he said.

“(Brands) can create live experiences that are both within another event and/or standalone,” he said. “Either way they’re operating their own IP and then once they do that, they can take advantage of the best parts of digital marketing and the best parts of live events. There’s clear ROI.”

Brands might traditionally have planned their sponsorship budgets around a dozen or more tentpole events. Creating their own live experiences might call for a different kind of frequency and cadence, Beranbom said — one that’s more aligned with the brand’s business objectives.

“Our best practice is to execute in an always-on, episodic fashion,” he said. “Every single time you do you’re building up new data, new talent and you’re also training your audience, just like CBS trains their audience to tune in on Monday night for American Idol.”

Performance Is Only One Aspect Of A Live Experience

Even as the pandemic gets under control, Beranbom said there will likely be consumers who aren’t comfortable attending in-person events for some time. Brands can help ensure they don’t feel left out by exploring the full range of creative opportunities to engage them in a live experience.

“Instead of just watching something in person, there will be extensions that can only happen digitally,” he said, such as a chance to be part of a virtual soundcheck for a select group or to have Q&As with talent in a green room before or after a performance.

“Where people started off was, “Let’s syndicate what’s happening out here digitally. That’s really only the first inning of the strategy,” he added. “You’ve got to allow for a lot more exclusivity and complementary experiences that tie into real life and extend the user journey.”