The fantasy is that a marketer simply takes out their phone, scrolls through the latest stars on TikTok, sends a direct message and suddenly has an influencer to act as a brand ambassador. Marisa Costa is here to tell you about the reality. 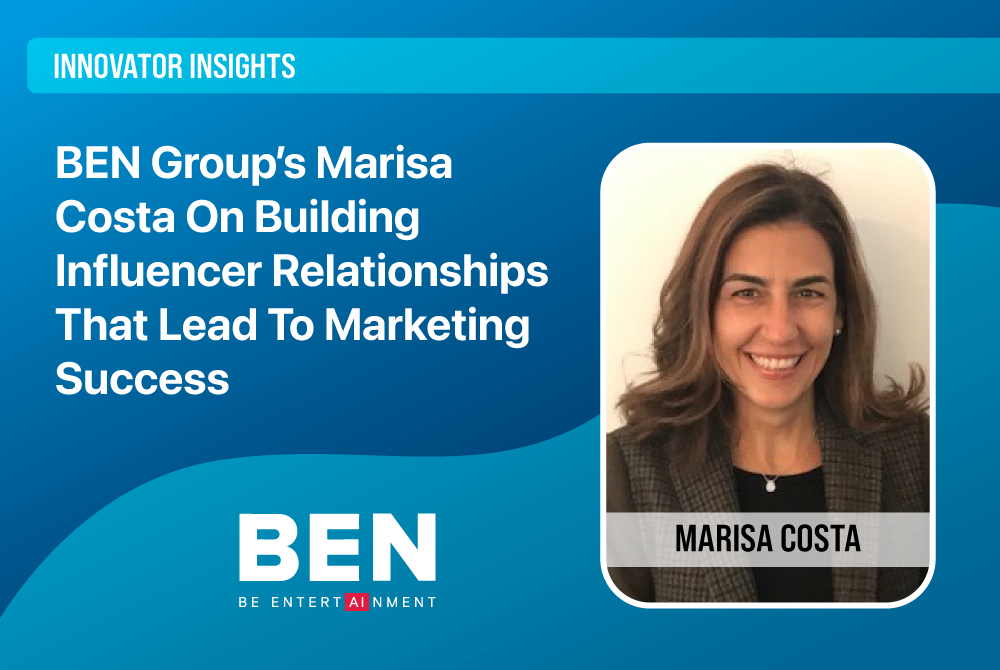 The fantasy is that a marketer simply takes out their phone, scrolls through the latest stars on TikTok, sends a direct message and suddenly has an influencer to act as a brand ambassador. Marisa Costa is here to tell you about the reality.

“It can be an incredibly heavy lift to work with influencers,” the vice president of influencer client development at BEN Group says. “It’s not just using filters or tools to look for them. It’s the negotiating, the briefing, the review and approval and all the reporting and metrics to analyze afterwards. Some brands have tried to do this in-house, and then they find how much time is required for the entire end-to-end process.”

Costa and her team at BEN take on this heavy lifting through managed services that not only includes identifying and engaging with talent but providing technology based on artificial intelligence (AI) to build a more data-driven influencer marketing strategy.

As influencer marketing becomes a more common practice among brands, Costa says the scope of opportunity is becoming wider than ever. Some brands see the value of working with influencers to drive greater traffic in a campaign, but others are more focused on converting social media users into active buyers. Still others find influencers offer an effective channel to repurpose creative assets and build upon the work they’re doing in more traditional avenues such as digital ads or TV.

That said, influencers are not simply a new form of creative agency or publisher. They are also not simply businesses.

“Sometimes it’s easy to forget that, as humans, they get sick, or their husband needs surgery,” Costa said. “They need to be treated as real people, and so many of them do their work with a good attitude.”

Costa’s other advice for those looking at building great influencer relationship includes:

Brand Safety Should Be Built Into The Relationship From The Outset

Influencers can attract large followings for a variety of reasons, but sometimes it’s by pushing the envelope in terms of content that shocks, provokes or is based on a potentially controversial point of view.

While brands have an obvious interest in working with influencers who are authentic in their work, they need guardrails to ensure they don’t align themselves with someone that doesn’t reflect their values. Costa suggested this was a matter of completing your due diligence in the early days of the relationship.

“You have to make sure that there's content review and approval built into the contract – and multiple rounds, not just one,” she advised. “You want to really ensure that the client is going to be happy with the outcome, and the influencer wants to be happy, too. The creative brief is so important, especially with brands that haven't done too much influencer work. They should be outlining all those do’s and don’ts, whether that’s using a particular hashtag, not mentioning competitors and all the other nuances that should inform what’s being shared.”

Besides using its AI tool to check for things like bot followers, Costa said BEN also conducts comprehensive online research about influencers, including searches for specific keywords, to have greater confidence from a brand safety perspective.

Adapt As Platforms Change With A Spirit Of Experimentation And Collaboration

If marketers are sometimes uneasy about the idea of working with influencers, it doesn’t necessarily have to do with the influencers themselves. The potential risk is that the social platforms influencers use are constantly changing how their algorithm works, and rewarding certain kinds of content over others.

A good example is Instagram, which began putting greater emphasis on its short-form video format, Reels, in response to increased competition from TikTok. Costa suggested this was an area where having a genuinely collaborative approach influencers puts brands in a greater position to be successful. So does committing to adapting to changes on social media as they occur.

“Most of the time, influencers will be open to trying new formats. The key question is, will they be successful with that new format?” she said. “It wouldn't be unreasonable to ask an influencer to try an entirely new format, but it should be treated as a partnership, where you’re both experimenting. Brands shouldn't be so demanding that they have unrealistic expectations. But if you really feel strongly about doubling down on a certain platform, you really should go deep.”

Recognize Everything An Influencer Is Bringing To The Table

Naturally influencers expect to be paid for their work, and fairly. Costa said they also want to be respected. Brands may assume, for instance, that an influencer’s following is based on some sort of fluke. Costa countered that many of them have developed considerable business savvy about what kind of content drives sales, traffic or some other outcome. Some of them have teams that study their data to identify trends and areas to improve.

BEN provides additional capabilities beyond clicks, views and other information that is commonly put into a spreadsheet. Its analysis of unstructured data like tone of voice and sentiment can help both the brand and influencer hone the right strategy for a given campaign or project. That doesn’t mean brands should be dictating everything about the content that will be developed, though.

“For anyone who works as an influencer for a living, this is their profession. They are talent,” she said. “Let influencers be their own creative directors.”